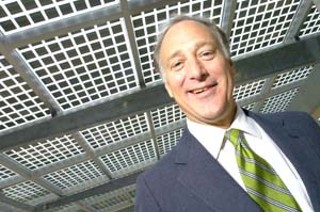 Last month the Greater Austin Chamber of Commerce announced a plan to create a Clean Energy Development Council, a project financially endorsed by the City Council on Jan. 13 with a city grant of $100,000 for the first year of a five-year commitment. The CEDC is intended to be one aspect of the city's broader "Opportunity Austin" project, initiated in 2003, which has an overall price tag of $13 million, and the declared goal of using business development initiatives to create 72,000 new jobs and a $14 billion economic impact to Austin during the project term. Specifically, the CEDC hopes to use economic incentives to attract new "clean energy" business to Austin, and grew out of a chamber study that identified clean energy as "an emerging technology the Greater Austin region should take advantage of."

Chamber president and former mayor Kirk Watson is certain it's the former. "Austin has demonstrated its capacity for creating a market for things that clean the environment and a willingness to experiment with things that improve quality of life," he said, adding concerning the chamber's role, "The fact that the traditional economic development organization in Austin is advocating clean energy sends a very strong message." In order to develop a strategic plan of specific types of businesses for the CEDC to target, the chamber has hired UT's IC2 Institute.

IC2 director Richard Amato said the institute's systematic approach includes pursuing traditional clean energy fields such as renewables (wind, solar, and biomass energy) and building efficiency, but may extend as well to home automation and water purification technologies. He pointed to the success of Austin Energy's incentives for photovoltaic solar installation and the area's flourishing IT and semiconductor industry. Amato said focusing on photovoltaics, as well as the creation of a smart energy network – using Austin's high tech community to renovate the electric grid – sound like equally attractive starting points.

According to Duncan, the CEDC can spark innovations like new electric transmission grids, residential and small-commercial thermal energy storage, white LED (light emitting diodes), and nanotechnology applications that could all be tested and integrated into a receptive community. With the CEDC also advancing traditional forms of renewable energy, Duncan said, "The problem is deciding what not to look at."

Anne Johnson, director of Solar Austin, a nonprofit promoting renewable energy, is also enthusiastic about the prospects. "The clean energy industry is going to develop, period," Johnson said. "We want it to happen here, and there is no reason why it shouldn't." Solar Austin will have a seat on the CEDC, acting as a conduit between the council and community members whose concern for energy security and clean air match their support for good jobs. "Several clean energy companies have already sought a home in Austin, and turned and left with the impression that other locales have more to offer them," Johnson said. One example was last year's loss of Spanish wind company Gamesa – Austin was a finalist for their new facility, but the company chose to locate elsewhere. "If this initiative would've been in place for Gamesa," said Amato, "Austin could've been the site of a major wind industry manufacturer, bringing resources closer to the development in West Texas."

Bob King, president of Austin consulting firm Good Company Associates, helped get the CEDC off the ground. He believes its first steps should build on Austin's green-friendly and tech-savvy strengths via the development of a "smart energy" network, which would use automated electric meters and computerized home appliances to send data over existing utility lines, providing information about electricity usage patterns. "We use our power plants and electric lines at full capacity 50 percent of the time," King said. "With more intelligence, we can increase the overall use of the system." Network data can help make peak energy usage adjustments. "If a 3,000 megawatt utility [like AE] shifted 10 percent of its load off-peak, it could save $15 million in new power costs, allowing the population to grow by 230,000 people without needing new power plants."