Early Bird Gets the Kindergarten 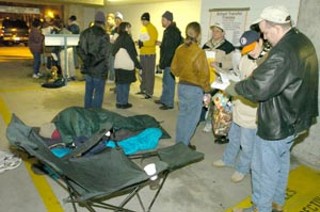 Some parents camped out all night to get a front spot in the transfer line. (Photo By John Anderson)

Before Friday night, there was only one thing Steve Payton had ever spent the night waiting in line for: tickets to the 1983 Texas-OU game. (The Longhorns won.) On Friday, Payton was the first parent in line to make a transfer request in AISD's first-come, first-served system for managing transfer requests that began at 7am Saturday morning. As he hunkered down in a thick, camouflaged coat to spend a chilly night outside AISD's downtown administration center, he thought fondly back to the '83 game as a good omen.

"That was well worth it," he said. "Hopefully this one will be, too."

Payton scored his space in line by arriving at 5:30 Friday morning. The second person showed up around 8, but barely a dozen people were there by late afternoon. That made Payton feel the tiniest bit foolish for showing up so early, until he realized the number of parents behind him who wanted to get their kindergarteners into the same school he wanted for his daughter.

"When I got here at 5:30, I thought, 'Why am I here?' But everyone here is Casis [Elementary], Casis, Casis," he said, gesturing to the others at the front of the line. "So it's a long time to wait, but … that's my little girl. You do what you have to do for your children."

By 9 o'clock Friday night, a line of folding chairs, air mattresses, and even a yoga mat or two snaked through the parking lot of AISD's central office. On Saturday, when the offices opened, 637 parents would make requests – a lot of requests to juggle, but a tiny percentage of AISD's 78,000 students. They wanted to move because they liked particular programs – the international baccalaureate program at Anderson, the cosmetology program at Crockett – or because schools were more conveniently located, had a reputation for strong parental involvement, or offered extra opportunities for enrichment. Pat Blankenship, for example, wanted to place his daughter in kindergarten at Gullett, rather than Brentwood, because it has more amenities, a Spanish program, and (of course) better test scores.

"It's a shame we have to do this," he said. "You'd like to think that every child could get off the bus and go to a school of the same caliber, but that's not the case, and it doesn't look like it's going to be solved any time soon."