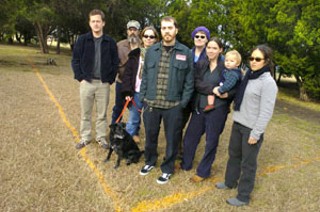 These and other members of the Galindo Elementary Neighborhood Association oppose turning South Austin Park into more tennis courts. (Photo By John Anderson)

South Austin Park's 11.75 sylvan acres, just south of Oltorf and west of MoPac, are marked by lush grass and the ample shading of numerous bur oaks. Interconnected drainage ditches slope underground, delivering rainwater to West Bouldin Creek. And right now, on the park's northern and southeastern corners, the ground is painted with bright, garish stripes. The stripes are not the work of vandals, but of the Galindo Elementary Neighborhood Association, and they outline an estimate of green space to be lost with the city's proposed construction of eight new tennis courts for the South Austin Tennis Center, already home to 10 such courts. The additional courts are the pending outcome of a $2.5 million bond proposition passed in 1998 – but Galindo residents are feeling less than neighborly about the city's largesse.

The exchange of multipurpose park space for the near-doubling of the single-purpose courts is but one of the complaints voiced by GENA. To make its case, the association undertook counts of court use, which they say indicate the SATC to be regularly operating at under 50% capacity. The opponents also argue against the addition of an estimated 86,000 square feet of impervious cover, since the park lies in an "urban watershed" as outlined by Smart Growth initiatives. Since water from the park drains into West Bouldin Creek, the capacity for downstream flooding seems likely to increase. Residents also fear increased traffic and noise on their narrow neighborhood streets.

The project's funding comes from 1998's Proposition 2, a $75.93 million bond package whose ballot language called generally for "constructing, improving and equipping public parks … and other related facilities, such as soccer fields, playgrounds, ballfields, and tennis courts." A separate bond brochure specified "courts" at the SATC. The Galindo neighbors say it wasn't until six years later that they learned the nature of the expansion, via spray-painted surveying marks scattered throughout the park. "That's how people in the neighborhood found out," recalled GENA member Jessica Gordon, whose home sits a block away from the proposed expansion. "It was around June."

GENA organized to oppose the construction that July, and a subsequent e-mail to GENA from Dave Sullivan, bond oversight rep to the Planning Commission, acknowledged that he did "not recall any citizen group ever lobbying the Planning Commission or Bond Oversight Committee for [the] project" in the first place. On Jan. 25, neighborhood association members gathered to oppose the project at a Parks and Recreation Board meeting, and board members seemed surprised at the vocal opposition, although they eventually voted to recommend the project. Board chair and vote tiebreaker Rosemary Castleberry said she had "no advance warning" of the neighborhood's opposition. "You try to get projects done so hard. You wonder, are these people upset?" Although she ultimately voted to recommend the expansion, Castleberry said, "I had a difficult time with this one."

While board members acknowledged the neighborhood opposition, they appeared to feel obligated to support the project because of the previous public approval of the overall bond package, and the process that followed it. "This was money from 1998. It went through voters, the bond oversight committee, the parks board. … There was no alternative," said Castleberry, although she noted that this is not the end of the matter. "This is going through the Planning Commission, and City Council," she said. "We are not a board that says, 'It's going to be this.' We make recommendations only."

GENA members Sara Strandtman and Gordon say they have no objections to tennis – they simply doubt the wisdom, and the usefulness to the neighborhood, of using city funds garnered in a vaguely worded bond election to build a single-purpose sports space. They compare the South Austin center to an 18-court complex in Waco, built with a mixture of public and private funds. Finally, they suggest different options for getting the most mileage out of taxpayer-supported tennis courts – for example, construction of more courts on school grounds, to be accessible to the public after school hours, yet filled with students during the school day. For more info, see GENA's Web site at www.arcaneworld.com/GENA.

Then There's This: Parks and Rec in Review
In a parks-centric town like Austin, it's not easy being PARD