When Is a Lie Not a Lie? 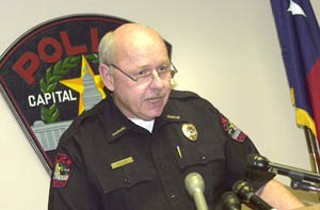 Troubling questions about Austin Police Department Chief Stan Knee's handling of officer discipline were raised again last week during the two-day civil service arbitration hearing of Officer Timothy Little, who was "indefinitely suspended" (that is, fired) on Oct. 10. According to Knee, Little betrayed the most basic tenets of police work – honesty and integrity, "the cornerstones of our profession" – when he failed to report an officer-involved 911 call and then falsified a government document in order to "cover" for the officer.

Little testified that he knows he made a grave error in judgement but asked for a second chance. Prior to the incident that led to his dismissal, Little had never been in trouble during his two-year tenure and had even been selected to attend the exclusive West Point leadership class.

Moreover, Little had confessed his error to his supervisors, and was equally forthcoming when questioned by APD Internal Affairs. IA Detective Alvin Thomas, who handled the Little inquiry, testified that he had been "in all honesty, surprised" to learn that Knee had decided to fire Little.

Little's attorney, Tom Stribling, general counsel for the Austin Police Association, presented to civil service arbitrator Herman Bennett evidence of at least a dozen similar cases in which Knee had responded more leniently (from three to 60 days off), and not a single offending officer had been terminated. Stribling questioned the APD's apparently arbitrary distinction between what the brass considers a "mistake" versus a "lie."

It appears that in his handling of Little's case, Chief Knee himself committed one or the other, perhaps resulting in "falsifying a government document" – precisely the offense for which he fired Little.

Shortly before 5am on March 13, 2004, rookie patrol Officer Little arrived at an apartment in East Austin, responding to a 911 hang-up call logged by dispatchers. Little knocked, but no one responded. He took a step back to see if he could see inside through a window, returned to the door, and knocked again. The door opened, and Little was surprised to find Officer Vernon Stevenson, a fellow rookie cop. Stevenson initially denied making the hang-up call, but realized Little could tell "something was not right," Little recalled. "He looked up [at me and] told me everything that happened that night."

Stevenson had broken up with his girlfriend, APD dispatcher Jennifer Tomeff, that evening, leading to a fight. Tomeff left the apartment, and Stevenson didn't know if she was injured, but told Little he could come inside the apartment and look around. Little declined, telling Stevenson he believed his story. Looking at Stevenson, "I felt real bad for him," Little testified. "I was thinking, this was a 911 hang-up call," and since Tomeff wasn't there and Little believed Stevenson's account, as far as anyone else knew "it was still just a 911 hang-up call." Little looked at Stevenson: "I said, 'We never talked.' He said, 'OK.'" At 4:54am, Little logged the call disposition into the patrol car computer terminal, writing that no one answered the door, that no lights were on, and that he couldn't see inside. Within 30 minutes, Little realized he'd made a big mistake.

According to APD policy, when Little discovered that another APD employee had made the 911 call, he should have called a supervisor. He also should have investigated to determine whether anyone was inside the apartment or hurt, and should have filed a family violence report regarding the altercation. Little did none of those things and instead fabricated the only report he did make – the call disposition he entered into the computer-aided dispatch system. Little had, in effect, "falsified a government document," technically a class A misdemeanor. A bit later, Little realized that Stevenson's supervisor had been called out to the apartment (Stevenson subsequently decided to report the fight), and within an hour Little had confessed his error, not only to his supervisor, Sgt. Beth Young, but also to Stevenson's supervisor, Sgt. Ken Connor. "I told him I made a big mistake," Little said.

APD Internal Affairs and the department's officer-involved crime unit investigated the incident, and a Travis Co. grand jury subsequently no-billed Little on the record-tampering charge. Nonetheless, in October, Knee dismissed Little from the police force. Little appealed the disciplinary decision, and during emotional hearing testimony last week said that he knows he broke trust with his peers and with the community, but that he'd never make such a mistake again.

According to Knee, for "knowingly and intentionally" entering false information into the CAD as a "favor" to Stevenson, and for breaching the department's policies on truthfulness, credibility, and integrity, Little must pay with his job.

But as attorney Stribling pointed out during the hearing, that hasn't been the price for other officers who've committed similar infractions. Stribling offered evidence of more than a dozen similar cases, none resulting in termination. Among them were several in which officers pulled over an off-duty officer for drunk driving, failed to report the incident, and then drove the inebriated officer home. One case involved Assistant Chief Cathy Ellison, who early in her career had asked an officer to skip a court hearing in order to help a friend get out of a traffic ticket. Knee said it would be hard to trust an officer who has broken trust – yet he chose Ellison for assistant chief.

Knee tried to distinguish those cases by claiming that what really disturbed him about Little's case was that the officer failed to conduct any investigation into a domestic disturbance during which someone might have been hurt. Yet Stribling recounted a case in which an officer had pulled over a drunken off-duty officer and drove the officer home, where he found evidence of a domestic dispute. The officer called the department psychologist but failed to do any other investigation. As punishment, the officer received four days off. (Incidentally, the department took no disciplinary action against Officer Stevenson, who may have made several unreliable early statements regarding the March 13 hang-up.)

Knee and other APD supervisors insisted Little must go because they would not be able to ensure that he wouldn't be involved in any further fabrications – lies that might not only be criminal but that might hurt the department's public image. Lies like Little's, said Knee, can reinforce the mistaken perception that the APD operates behind a "Blue Wall of Silence."

The Chief, the Attorney General, and the DA

The department's pretense of absolute rectitude in Little's case appears contradictory. For in handling the case, Chief Knee made an apparently intentional misrepresentation in order to stall final disposition of the administrative case – committing a version of the very infraction that may result in Little's permanently losing his badge. Department records reflect that the criminal inquiry into Little's conduct was completed in late June. Yet it wasn't until two months later that Knee wrote a letter to Texas Attorney General Greg Abbott requesting an extension of the civil service law's 180-day window for imposing discipline. Knee cited the need to "protect" the department's criminal inquiry into the matter. "I consider it necessary to delay my disciplinary action until after the 180-day period," he wrote to Abbott on Aug. 10, "in order to protect the continuing criminal investigation of Officer Little's conduct."

Asked by Stribling to explain the time discrepancy in the documents, Knee initially sat mute. After a long silence, he claimed that there was, indeed, a valid reason for his belated request. It wasn't that there was necessarily an "active" criminal inquiry going on, Knee said, but that the department didn't yet know whether the Travis Co. District Attorney's Office might want to present Little's case to a grand jury for possible indictment. (In late September, a grand jury declined to act against Little.) The APD, Knee said, "considers [a criminal inquiry to be] open until ... the County Attorney or the District Attorney respond back to us." Knee said that he hadn't talked directly with any prosecutors about Little's case, but that he'd gotten an "indication" in one briefing or another that suggested they might be interested in filing charges.

Stribling asked how the DA's decision could have "affected this case if you'd imposed discipline before the grand jury" acted? There may be cases, for example, where evidence would be placed in jeopardy or an ongoing undercover operation could be threatened by the imposing of discipline before the completion of a criminal inquiry. But Little's case has none of the investigative qualities that would normally necessitate an extension.

Nonetheless, Knee explained, it was not his decision: the DA's office maintains a blanket request that the PD refrain from imposing administrative discipline until prosecutors are done contemplating a criminal case. "See, in some cases, the DA may say its okay to do A, B, and C," Knee said. "No one case is the same as another. It depends on what the DA wants and what the criminal investigator decides as they move through."

Unfortunately for Knee, the DA's office says it doesn't share his procedural understanding. There may be certain unique cases "too hot ... to let anything civilly interfere with it," says Assistant DA Claire Dawson-Brown. Far more common are cases "where the crime is complete," there is no possibility of evidence tampering, and the investigation "can really be developed through an administrative inquiry." In other words, cases just like Little's. The PD's administrative, disciplinary inquiry "goes its own way, and we go ours and nothing interferes. And that's the more typical situation."

Frequently, Dawson-Brown said, APD's IA investigations move more quickly than do the DA's criminal inquiry, and "a lot of times [IA investigations] kick in before we get those [cases] criminally." Civil service law imposes a 180-day limit, Dawson-Brown noted, and therefore the PD has a "timetable." "And we don't interfere with those. We really do try to keep them separate." The DA's office, she said, is accustomed to "these parallel proceedings."

DA Dawson-Brown's explanation of her office's procedures appears to directly contradict Knee's sworn testimony before the arbitrator. Asked about the apparent conflict, Stribling said that pending the arbitrator's decision in the matter,"it may be necessary to resolve these conflicting statements through the judicial system."

While the verdict remains out on the truth of Knee's testimony, the chief's arbitrary and unforgiving axe of honesty has come down hard on Timothy Little. And although Knee says he considers Little untrustworthy, during the entire seven-month period from the March 13, 911 hang-up call until October, when Knee fired him, Officer Little remained on full duty with pay, and continued his training in the West Point academy leadership class.