A Dog Law With Teeth 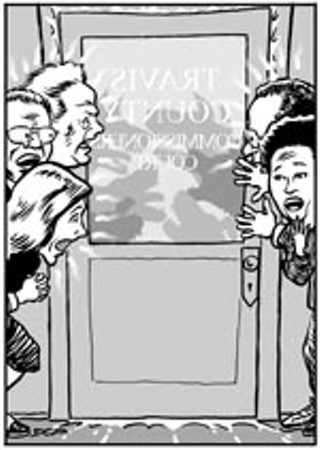 Before anyone starts growling, let's get one thing clear: The law the Travis Co. Commissioner's Court is drafting to address the issue of loose dogs in unincorporated parts of the county is not a "leash law." Rather, the kind of law the court wants to enact, largely in response to the December mauling of an 8-year-old girl by a pack of loose dogs, is better described as a "containment" law. That is, the county needs a way to deal with dogs that menace the neighborhood when they roam around unsupervised, without cramping the lifestyle of responsible pet owners.

Like most municipalities, the city of Austin has a leash law, which requires dogs to be confined or on a leash. The county has no such law; its only tool is a "dangerous dog" law that allows courts to force individual owners to keep specific dogs confined. But that law is as full of holes as a year-old chew toy. For one thing, Travis Co. has only 12 officially dangerous dogs – i.e., the law is not being used. Also, it doesn't help the county deal with abandoned, ownerless dogs roaming in packs. And worse, a dog can't be ruled dangerous until after it has menaced a human – killing other animals doesn't count – and the human can't have "provoked" it, such as by trying to rescue poor Fluffy from its jaws during an attack.

"To think you're supposed to stand there and let your dog be killed is absurd," said Judy Grigsby. She was one of a group of neighbors from the Foothills of Barton Creek who testified that the current law had failed them. For years, they said, the neighborhood had been menaced by a lab-pit bull mix named Summer, who would run off its property to attack neighborhood dogs. Calling law enforcement was no help, she testified – the dog hadn't hurt a human, and it was always back on the owner's property when the officers showed up. Then, this past New Year's Eve, Summer killed Grigsby's miniature dachshund, and a few hours later attacked another dog as it was being walked by its sitter. When the sitter tried to rescue the dog, she got bit in the face. While the human bite opens more possibilities for the neighbors to take action, Grigsby said they should have had other avenues before a person – and at least four dogs – were attacked. "We're tired of law enforcement agencies having no power to take action," she said.

While the commissioners agreed the current law was flawed, several pointed out the difficulty of writing a containment law appropriate for rural areas, where people often have large properties and no fences, and are used to letting their dogs roam around their land without incident. This sentiment was echoed by resident Gail Atwater, who said she had moved to the country for "personal freedom," and argued that the answer lies in enforcement, not more laws. "It's not a perfect world," she said. "We keep making laws and laws and laws, and it's still not perfect."

"What if we just substitute a good law for one that's not so good?" asked Judge Sam Biscoe. "We'd still have the same number."

That, Biscoe said, is the general plan. The court will finalize draft legislation on Jan. 18, which they will vote on after holding another public hearing in the following weeks.