Year in review for cops and firefighters 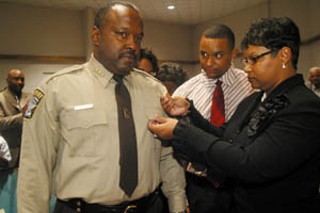 1) Unequal Farce: After a "comprehensive" analysis of police records, the Austin American-Statesman declared that Austin police have used force against minority residents at "significantly" higher rates than against whites. The findings "defied easy explanation," the paper reported – in part because the paper's methodology defied logical explanation. The Chronicle pointed this out a week later (and in so doing made our own stupid mistake – referring to stats of alleged worst cops as "mug shots"). The APD and the city grumbled and muttered but apologized, and the political reverberations continue.

2) Owens Shooting Unindictment: On Jan. 15, Travis Co. District Judge Brenda Kennedy tossed out the criminal indictment of APD Officer Scott Glasgow, who was brought up on negligence charges in connection with the 2003 on-duty shooting death of Jessie Lee Owens. In February, Knee handed Glasgow a 90-day disciplinary suspension for policy violations sustained in the wake of the shooting.

3) APD Don't 'Low No Music-Playing 'Round Here: In March, Sixth Street cops busted several members of the Los Angeles band Ozomatli after their SXSW showcase. According to the cops, the band disobeyed orders to take the beat back inside the Parish and one allegedly whacked a cop upside the head with a drum. Videos and other witnesses disagreed, and charges were eventually dropped.

4) (Fire)Fight for the Right: In May, city voters handed a victory to the Austin Association of Professional Firefighters with collective-bargaining rights in future labor negotiations with the city. The new negotiating scheme – which offers public access to the process – will be used in the next round of city negotiations, in 2005.

5) Evidence, Schmevidence: The midyear discovery by the Houston Police crime lab of hundreds of boxes of untested evidence resulted in numerous officials – including HPD Chief Harold Hurtt – calling for a moratorium on executions for Harris Co. defendants pending evidence review. Harris Co. District Attorney Chuck Rosenthal and Gov. Rick Perry insisted that the lab's ongoing problems couldn't possibly have thwarted justice for any of the condemned. In short, the Texas death machine didn't even stutter.

6) Questioning the Reaper: While the state seemed reluctant – at best – to question the Texas death penalty, the U.S. Supreme Court intervened. Last month the Supremes heard the appeal of Thomas Miller-El on grounds of race-based jury selection, tossed the capital conviction of Delma Banks Jr. (prosecutorial misconduct), and returned the case of Robert Tennard (mitigating evidence). In December, the court agreed to hear the case of a Mexican national who says Texas violated international law. Nevertheless, the Texas death machine rolls on – at 23 for 2004, we're still No. 1 with a needle.

7) Still Bleeding Bad: In June, the city lost its bid to dismiss a whistle-blower suit brought by APD Detective Jeff White in connection with the infamous Mala Sangre drug trafficking case. During the two-year wrangling, all the city managed to accomplish was to damage its own case and disqualify its chief Mala Sangre lawyer, Lowell Denton. The road is now clear for a trial – maybe in 2005.

9) Officer Down: The APD lost four of its own last year – all in vehicle accidents. In April, Cadet Trina Kay Andretti was killed on her way home from the academy on Highway 183. In October, rookie Officer Amy Donovan was killed by the patrol car driven by her partner pursuing a suspect. In December, Cmdr. Shauna Jacobson and her husband, retired Detective Malcolm "Kurt" Jacobson were killed when their motorcycle struck a guardrail on Highway 71 – toxicology results reported legal intoxication.

10) Troopergate: On Dec. 15, the Texas Department of Public Safety was slapped by a Travis Co. jury for rigging a 2001 promotional exam to promote a group of good ol' boys, for gender discrimination, and retaliation. The case was brought by 16 DPS lieutenants passed over despite strong written exams. The jury awarded two plaintiffs more than $200,000 each on the gender discrimination and retaliation claims and awarded all 16 plaintiffs more than $600,000.