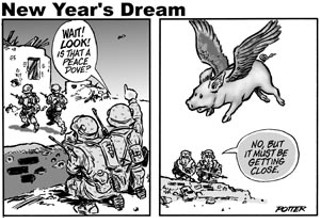 Quote of the Week: "We try to create a house that reflects the city that we're in. Coming to Austin, we'll want to have a sense of Austin as a young, hip city. There's some great design there, but there's also this wonderful kitschy thing on South Congress. They will have very cool digs." – Jon Murray, executive producer of MTV's The Real World, as quoted in the Statesman.

Yes, MTV is bringing its venerable reality show to Austin for its 16th season. (Just in time for South by Southwest!) Where the seven new Real Worlders will live, and what they'll do, are of course closely guarded secrets. Presumably, the affordability of those "cool digs" is not an issue. We know it's a slow news week and all, but considering that MTV already ran an entire series set and shot in Austin, why is "Real World" such a big deal?

On to real news: APD has upped the ante in its probe into the circumstances surrounding the deaths of Shauna and Kurt Jacobson, but it's still unclear whether an independent investigation will really give the public answers. See "Outside Probe in Jacobson Case."

The White House announced over the holiday that all its favorite wannabe federal judges – including Texas' beloved Priscilla Owen – will get another date with the battle-weakened Senate Democrats.

More reporters hanging up their notebooks: Statesman eminence Dave McNeely is retiring from the Capitol beat after 26 years. It must be a trend.

For the second time this school year, the East Side Action Coalition has called on Austin ISD administrators to remedy a "dangerous" and "hostile" environment at Reagan High School – meaning, this time, tense relations between teachers and principal John Gonzalez, who took over the school at the beginning of the year. "Teachers are experiencing very hostile treatment and rudeness," said Pastor Sterling Lands, who leads the group. He described, for example, teachers being berated by the principal in front of students. "That creates an environment of intimidation. Teachers are spending time covering their backs rather than teaching." Lands said he didn't have a specific answer for the problems, but "I'm not suggesting another dag-blasted task force. I'm definitely not suggesting that." Such a task force, on which Lands served, was appointed after Reagan student Ortralla Mosely was murdered by fellow student Marcus McTear in 2003, and the ESAC leader charges that panel's purpose was not to enact change, but to defuse criticism and divide the community. District offices are closed for the winter break, so officials did not respond to the group's concerns. – Rachel Proctor May

Travis Co. Sheriff's Office deputies found an inmate, housed at the Travis Co. Correction Complex in Del Valle, hanging in his cell just before 11pm on Dec. 24. Corrections officers, medical staff, and EMS tried to revive Jerry Rene Dokes, but after nearly an hour were unsuccessful. Dokes, 22, was in jail on several charges, including aggravated sexual assault of a child. – Jordan Smith

An organized effort to stop Lowe's Home Centers Inc. from building two big-box stores in environmentally sensitive locations will close out the year with a bang (more than 5,265 opponents have added their names to the list) and a whimper (one of the developments is still going great guns on the banks of Little Barton Creek). The other project, on a tree-cleared barren spread along Brodie Lane in Southwest Austin, remains in a legal holding pattern while a lawsuit wends its way through the courts. Construction on the project stalled out in June after District Judge Lora Livingston issued a temporary restraining order against Lowe's in the case brought by the Save Our Springs Alliance, the city of Sunset Valley, and the Save Barton Creek Association. While that case plays out, Lowe's plows ahead on its new store in the village of Bee Cave, west of Austin. That project has already come under the glare of state environmental inspectors after an onsite silt fence failed to prevent construction runoff from spilling into Little Barton Creek. More on the Lowe's saga can be found at www.stoplowes.com. – Amy Smith

CAPCO is now CAPCOG: The former Capital Area Planning Council has changed its name to the Capital Area Council of Governments. This reflects the fact that CAPCO always was a COG – one of the 24 councils created by state law back in 1970, based in the state's metro areas and including nearby rural counties, and given almost no power or authority except what they can claim for themselves. CAPCOG, which includes the Austin metro area and surrounding counties from Llano to La Grange, offers services including (among other things) support for regional planning efforts (including GIS), coordinating solid-waste management, and overseeing regional 911 service. Other than the new name (and a new logo) – and the resulting Web site change to www.capcog.org – the group's vital statistics remain the same. – M.C.M.

On Dec. 22, the Texas Civil Rights Project filed a civil rights lawsuit against several law enforcement agencies and the city of Crawford on behalf of five activists arrested near President George W. Bush's ranchette in Crawford in May 2003. In their suit, the so-called "Crawford Five" allege that the Texas Department of Public Safety, Crawford Police Chief Donnie Tidmore, and McLennan Co. Sheriff Larry Lynch and his chief deputy Randy Plemons violated the activists' free speech rights, as well as their right to be free from unlawful arrest, when they refused to allow the five to protest in Crawford and near the ranchette during a Bush visit there. The C5 were charged with violating the city's parade and procession ordinance and were tossed in the clink – even though the charges were mere class C misdemeanors, ultimately punishable by up to a $500 fine. In July, McLennan Co. District Judge Tom Ragland dismissed all charges against them, ruling that the city's ordinance was "overly broad on its face" and that the manner in which the ordinance was enforced "contravened" the First Amendment. The Five are seeking a permanent injunction against the defendants, to keep them from threatening free speech rights in the city and near Bush's pad, and seek unspecified damages for each of the five plaintiffs. – J.S.

State Rep. Will Hartnett, R-Dallas, appointed by House Speaker Tom Craddick as the "master of discovery" for the committee charged with investigating the three challenges to November House election results, last week directed committee members to avoid all discussion of the challenges with the parties involved, while they are under investigation. The three challenges are all by Republican candidates defeated by Democratic opponents – two incumbents, Houston's Talmadge Heflin (defeated by Hubert Vo) and Austin's Jack Stick (defeated by Mark Strama), and Eric Opiela, who lost to Yvonne Gonzalez-Toureilles in District 35 in South Texas. After two recounts, Vo was declared the winner over Heflin by a mere 33 votes, while the other two races were decided by larger margins. Hartnett said he sent a letter to committee members – who are to act as "jurors" in the challenge review before the House in January – after hearing rumors of contacts among the various parties. He said that while he did not "order" members not to consult with the candidates or their campaigns, he "highly recommended" against such contacts. – Michael King The Houston Chronicle reports that Houston homebuilder Bob Perry has become the biggest Republican political donor in the U.S., contributing $9.6 million to candidates, political action committees and independent advocacy groups, like the so-called Swift Boat Veterans for Truth that mounted a devastating personal attack on John Kerry's Vietnam-era military service. Although previously known for his donations to state and local GOP candidates and his enthusiastic support for "tort reform" (limiting consumer lawsuits against corporate defendants, including homebuilders), in the 2004 election cycle Perry and his wife Doylene gave considerably more money to independent "527 groups" like the Swift Boat campaign. According to Campaigns for People, Perry also donated at least $5 million to Republican legislative and judicial candidates. – M.K.

Weed Watch: The board of directors of the National Organization for the Reform of Marijuana Laws has voted to appoint Allen St. Pierre as their next executive director. St. Pierre has worked for NORML since 1991, serving as communications director, deputy national director, and most recently as head of the NORML Foundation – the sister organization established to educate the public and aid "victims" of draconian dope laws. St. Pierre is replacing NORML founder Keith Stroup, who announced his retirement in September. For more "Weed Watch," see p.21. – J.S.

California reporter Gary Webb, 49, whose career in journalism was nearly torpedoed in the wake of his groundbreaking reporting on the involvement of U.S.-supported Nicaraguan contras in the international drug trade, died Dec. 10 at his home near Sacramento, apparently by suicide. In a 1996 series, "Dark Alliance," written for the San Jose Mercury News, Webb described the alliance of convenience during the Eighties between Central American cocaine traffickers, who were transporting drugs for sale in Los Angeles, and the Central Intelligence Agency, which turned a blind eye to the drug trade as long as a large share of the money was returning to the counterrevolutionary war effort against the Sandinista government of Nicaragua. Although other newspapers have attempted to discredit his reporting (even in their obituaries), and his editors at the Mercury News disavowed the stories and demoted Webb, the CIA itself eventually confirmed many of his revelations. In recent months Webb had reportedly been despondent over his circumstances and the dissolution of his marriage, but "whatever the details of Webb's death, American history owes him a huge debt," wrote Robert Parry, editor of the Web-based investigative reporting site Consortium News. "He – along with angry African-American citizens – forced the government to admit some of the worst crimes ever condoned by any American administration: the protection of drug smuggling into the United States as part of a covert war against a country, Nicaragua, that represented no real threat to Americans." – M.K.

Political football will come into play Saturday as supporters of City Council candidate Margot Clarke and Longhorn fans converge for a campaign fundraiser/Rose Bowl watching party. The event will be 3-8pm in the home of Rosemary Merriam and George Warmingham. (Call 791-9874 for location and other details.) Clarke is running for the Place 3 seat occupied by outgoing Mayor Pro Tem Jackie Goodman.

The documentary Monumental, about the life and work of Sierra Club founder David Brower ("arguably the greatest environmentalist of the 20th century"), will be shown Jan. 5-6 at the Alamo Drafthouse Cinema Downtown, 409 Colorado. More info at www.originalalamo.com.

As Austin's I-35 Mess Gains National Attention, the City Refocuses on the Palm District
Applying an "equity lens" to reimagine the blocks alongside Austin's gnarliest highway