Sucking, Spewing, and Burning LNG and the Texas Gulf 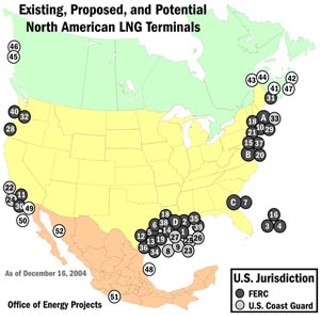 Currently, there are only four LNG terminals in all of North America, but eight different projects have been proposed or approved for the Texas Gulf Coast alone.
For a larger map click here

Following the latest recommendations of the governor's Texas Energy Planning Council, Texas is poised to become the nation's largest handler and supplier of imported natural gas, hoping to take on the role of "The Natural Gas State." Plans are in progress for as many as eight new onshore and deep-water Gulf of Mexico facilities, designed to receive and process liquified natural gas. While the energy industry considers imported LNG as simply another form of exploitable hydrocarbon, critics point to several fundamental problems, including safety, long-term availability, and potentially broad environmental consequences.

The safety issues include the explosive volatility of LNG terminals, compounded by their close proximity to residential populations and their vulnerability to terrorist attacks – an LNG explosion could create a fireball as much as a mile wide. Others object to increasing U.S. dependence on the OPEC nations (source of much LNG), a trend directly contradicting the EPC's declared objective of "energy independence for Texas." Most recently, concerns are being raised regarding the environmental impact of the terminals' massive use of Gulf waters. In the course of a day's processing operations, LNG terminals would gulp up to 200 million gallons of seawater (along with all its living inhabitants), and then spew it back out – chlorinated and 18 degrees cooler – with consequences yet to be determined.

At the point of origin (e.g., Nigeria or Qatar), gathered natural gas is cooled to -260F, liquifying it and shrinking it to a fraction of its gaseous size, to enable economical transportation. At its destination port, the LNG must be returned to a gaseous state by reheating. There are three standard heating methods: air (effective only in warmer weather); gas (burning small amounts of the LNG); and various water-cooling methods, including the versatile and cost-effective industry favorite, Open Rack Vaporization. The ORV method pumps chemically treated Gulf water over a network of piping that houses the LNG, then discharges the chlorinated water back to the Gulf. Gas heating – apparently less threatening to the Gulf ecosystem – can cost up to 10 times more than ORV in operating expenses, burning around 1.5% of the overall LNG shipment.

The Federal Energy Regulatory Commission regulates coastal projects, and the U.S. Coast Guard has jurisdiction over the licensing of deep-water LNG ports outside state waters. The Guard's role in the licensing process is to ensure that the Environmental Impact Statement for each proposed LNG terminal is prepared properly, including scientific studies and public comment on ecological impacts. "We act as a middleman on the playground, coordinating the public with state and federal agencies," said Lt. Ken Kusano of the Coast Guard's deep-water ports division. "We're neither for or against the projects. Our job is to report the facts in the EIS." But that process is often viewed with disdain by the gas industry, as interfering with both energy development and profits.

But the effects on Gulf habitats look to be as real as the profits. Kusano says the Guard is concerned about potential "impacts to the fisheries" from ORV. The National Oceanic and Atmospheric Administration found a "100 percent mortality rate of all organisms entrained by the vaporizer." Environmental Defense, Greenpeace, and the Sierra Club cited the NOAA data in letters to the Maritime Administration, the agency that actually issues the offshore facilities' licenses. "The LNG terminal requires the intake, disinfection, and discharge of 100-200 million gallons of chlorinated sea water per day, causing toxic and mutagenic effects that damage the processes of reproduction, feeding, and respiration in marine life," said the letter from Greenpeace. Referencing National Marine Fisheries Service data, Greenpeace said one proposed site "infringes upon areas identified as essential fish habitats for a variety of fish and shrimp species, serving as a nursery and foraging habitat for many economically and ecologically important species. ... clearly, the number of jobs lost due to the devastation of the fishing industry would be greater than the number of jobs created by the LNG facilities, and would therefore have an overall negative impact on the state's economy." John Hocevar, an oceans specialist with Greenpeace, told the Chronicle, "The projects currently under consideration jeopardize National Wildlife Refuges on a coastline already largely given over to the oil and gas industry."

All but one of the eight proposed LNG terminals near Texas plan to use ORV, although all four existing LNG regasification terminals in the U.S. use the gas heating method (also known as submerged combustion vaporization, or SCV). A letter drafted by the Border Power Plant Working Group, advocates of environmentally sustainable energy facilities in the U.S.-Mexico border region, stated that "the use of SCV would result in no adverse environmental impacts to marine life. Clearly if every existing LNG regasification terminal in the U.S. is using SCV it is economically practical to do so." Hocevar framed a larger argument against LNG development altogether. "Texas leads the nation in potential solutions to global warming," he said, "and these expensive and highly dangerous LNG projects take us down the wrong track. Instead of further increasing our dependence on energy from the Middle East, we need to develop the wind and solar resources we have right here in Texas."

Cheniere Freeport LNG's Quintana Island onshore terminal is the closest to operation of all the new Gulf facilities, and is the lone exception to the ORV trend. Chevron Texaco's Port Pelican and El Paso Energy's Energy Bridge, both deep-water ports, are already licensed and plan to use ORV. Their licenses do require the operators to "monitor impacts of operations on essential fish habitats, coordinate with NOAA Fisheries throughout development and implementation, and provide ... a NOAA-approved monitoring plan." Kusano says the licenses are by no means without restrictions, and that the terminals must meet several requirements to earn permanent approval. But he also acknowledged that neither the Coast Guard, NOAA, nor EPA currently impose formal rules or regulations for the vaporization process, although work on their implementation is now in progress. Environmentalists say they hope those rules arrive early and effectively enough to have some effect in protecting the living Gulf waters.