The Friends of Deep Eddy organization ( www.deepeddy.org) is $300,000 into a $1 million fundraising effort to restore the spring-fed pool's historic, WPA-built bathhouse. On Saturday, Mayor Will Wynn kicked off a "roof-breaking" to commemorate renovation of the bathhouse roof, made possible through a $42,000 gift from the Austin Convention and Visitors Bureau Heritage Marketing Program. (Photo By Jana Birchum)

Quote of the Week: "This is just one of those things that is painful, and there's not an awful lot we can do about it." – Texas Transportation Commission Chair Ric Williamson, referring to the massive land takings required to build the Trans Texas Corridor project. See "Austin@Large."

Austin police, the Texas DPS, and the Texas Alcoholic Beverage Commission are all probing the circumstances of the alcohol-involved motorcycle crash that killed APD's Shauna and Kurt Jacobson. See "Bar Targeted in APD Bike-Wreck Probe."

Meanwhile, the DPS got slapped with a $1 million judgment as a Travis Co. jury found the agency rigged promotional exams in the Troopergate fiasco. See "DPS Slapped in 'Troopergate' Verdict."

Cyclists cheer as the current developers of the Lumbermen's tract offer an attractive option for extending the Pfluger Bridge. See "Gables to hook up bridge?"

Oh, and by the way: Merry Christmas. Feliz Navidad. Joyeux Noël. Buon Natale. Fröhlich Weihnachten. And to all a good night.

The Travis Co. Democratic Party has moved. The party says that rising rent sent them packing from their MLK Boulevard location to a new one at 1311-B E. Sixth, right next door to where the party's headquarters were just a few years back. Phone number, PO Box, and fax all remain the same. Call 477-7500 or go to www.traviscountydemocrats.org for more info. – Lee Nichols 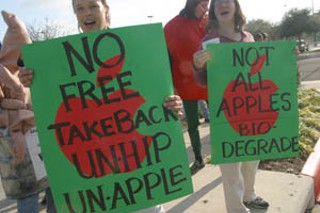 Now that Dell is no longer the top target of electronic waste recycling activists, Apple Computer has filled the protest vacuum. These members of Texas Campaign for the Environment gathered outside the Austin offices of Apple in north Austin last Thursday to demand that Mac users not be charged a $30 fee to recycle their obsolete computer hardware. (Photo By Jana Birchum)
The I-35 Makeover Coalition, a group of civic organizations and community leaders trying to redesign the stretch of I-35 between Sixth and Eighth to turn it into a more inviting gateway into East Austin, announced on Monday a request for qualifications to design professionals. In a press release (written, incidentally, by coalition steering committee member and outgoing Chronicle City Editor Mike Clark-Madison), Council Member Raul Alvarez said, "We hope to greatly improve an area that is visually blighted and at times dangerous. The physical improvement of the area will also help reduce the barrier effect that these conditions have created between East Austin and West Austin." – L.N. Writer Spike Gillespie became a tempest in AISD's teacup when the principal of Highland Park Elementary School last week rescinded an offer for her to teach an afterschool book club. Gillespie teaches many such clubs in various AISD schools, where she leads activities around books chosen by teachers or librarians. But it seems that some Highland Park parents had visited Gillespie's Web site, read some of her proudly potty-mouth prose, and decided that anyone who opens her online "dot-novel" with the words "donkey cock" couldn't possibly have anything to offer the youth of Highland Park. And that's what they told school officials, who decided the "path of least resistance" would be to give Gillespie the boot. Gillespie, understanding how these things work, immediately called in the press, at which point Highland Park principal and librarian stopped taking calls. One can only imagine the weeping, wailing, and gnashing of teeth as AISD and school officials struggled with whether to further offend free-speech advocates by sticking to their perhaps-too-hastily-fired guns, or offend the anti-smut crowd by reinstating the offer. But by the end of the day, AISD said "donkey cock" to the latter, and sent Highland Park students home with a letter announcing that despite a "diversity of opinions" at the school, the club would go forward as planned, with Gillespie as its leader. And the crowd (or at least Gillespie) went wild. – Rachel Proctor May On Dec. 18, Operation Blue Santa delivered toys to more than 11,000 children, as part of the APD's annual holiday fundraising event benefiting Austin's needy families. This year, Blue Santa was prepared to serve nearly 3,800 families and last week delivered toys and food to more than 3,500 families. OBS is working with the Christmas Bureau and other organizations to donate the surplus booty. – Jordan Smith 'Twas the year before First Night, and all through City Hall ... things aren't quite as festive as was expected. The City Council voted last week to provide $45,000 in funding to support the alcohol-free arts and culture fest planned for New Year's Eve 2005 – but only over the objections of council members Daryl Slusher and Danny Thomas, who voted against what was supposed to be a consent item. Thomas was most vocal in his concerns, grilling his colleagues and staff as to why established events have been turned down for city funding while the brand-new First Night effort was not. The short answer, at least according to conventional wisdom, is that First Night's biggest backer is Anne Elizabeth Wynn, wife of Mayor Will Wynn. (The agenda item, though, was sponsored by Jackie Goodman and Betty Dunkerley.) Both Wynns and the First Night project took a talk-radio beating last week. – M.C.M.

Texas Land Commissioner Jerry Patterson, who pledged in November to use parts of Texas' coastline under General Land Office control to foster wind power development, announced Friday that the EPA has awarded $381,000 to the GLO to provide a solar energy system for a municipal water treatment plant near the border with Mexico. The grant, funded by the North American Development Bank, which supports water and wastewater projects in the border region, will be tracking the project to determine if similar sustainable energy systems may be practical in other communities. "This demonstration could prove that, taking all factors into account, solar power is a cost effective way to power public infrastructure projects," Patterson said. "It could improve water treatment in the border region without the pollution associated with conventional power sources." According to the EPA, the rapid increase in population and industrialization in border cities has presented serious challenges to existing municipal water systems. A site for the project will be picked by the end of January, and installation will start in the second half of 2005. – Daniel Mottola

In the ever-amusing Texas Republican race to the far, far right, Gov. Rick Perry's 2006 campaign has announced the support – in their "personal capacity" – of a brace of representatives of anti-choice, pro-boss, anti-schools organizations. Among the "conservative" and "family values" Perry supporters are Cathie Adams of the Texas Eagle Forum; Jim Cardle of Texas Club for Growth; Becky Farrar of Concerned Women for America PAC; James and Elizabeth Graham of the Texas Right to Life PAC; Tim Lambert of the Texas Home School Coalition; Norm and Jeanne Mason of the Texas Christian Coalition; Dr. Joe Pojman of the Texas Alliance for Life; Kelly Shackelford of the Free Market Foundation; and Susan Weddington, former chair of the Republican Party of Texas. Perry said he is "truly humbled to have the support of outstanding, well-respected leaders of the conservative cause." Not to be outflanked, Sen. Kay Bailey Hutchison's spokesman Dave Beckwith told the Houston Chronicle that his likely candidate is "one of the most conservative senators in Washington," who has "supported every restriction that the state of Texas has put on abortion." Perry hopes to gain primary purchase from Hutchison's GOP reputation for being soft on stem cells. Another potential candidate never shy at the microphone, Comptroller Carole Keeton Strayhorn, said only, "This is not the season for politics." Ho, ho, ho. – Michael King

A moment of nondenominational silence for longtime Christian fundamentalist textbook critic Mel Gabler, who died Sunday in Longview at 89. Gabler and his wife, Norma, had long been fixtures at State Board of Education textbook review hearings, although in recent years age and declining health had lessened their participation. The Longview News-Journal reported that Gabler "emphasized accuracy and a Christian perspective in examining school children's books," but it would be more true to say that the Gablers and their "Education Research Analysts" never let the former get in the way of the latter. Gabler was notorious for his attacks on any positive mention of evolution in biology textbooks, insisting that "special creation" get equal time and that the textbooks record "what's wrong" with evolutionary theory. His reviews did indeed reveal factual errors in the textbooks – but his moralistic Pecksniffery is reflected best in statements like this, on mathematics texts: "When a student reads in a math book that there are no absolutes, suddenly every value he's been taught is destroyed. And the next thing you know, the student turns to crime and drugs." May he take it up with the Master Mathematician. – M.K.

It looks like a hoax, but if so, it's an absolutely necessary one. In response to the recent announcement by Texas Parks & Wildlife that some state parks will now feature "wireless" access for campers who just can't leave behind their laptops, cell phones, and BlackBerries, a group calling itself "Urbanoia Design Group" has announced the release of a prototype "anti-cell tent," designed to protect campers from the presence of invading cyberspace technology. "It has become necessary to provide the camper who is trying to remove themselves from the pressures and rigors of our hyperconnected society a means for ensuring a restful sojourn into the woods," reads the Urbanoia press release. "Those wishing to engage the sounds of the wild instead of the sounds of ringing telephones, televisions, and radios are the target market." Said Urbanoia CEO Jonathan Smith, "Urbanoia is excited to work on such a project that allows visitors to the state parks in Texas a chance to visit the park instead of visiting Web sites." For more info, including cool futuristic drawings of the "smart tent" in action, see www.urbanoia.com. Just don't do it at a Texas campsite. – M.K.