For the Activist Who Has Everything 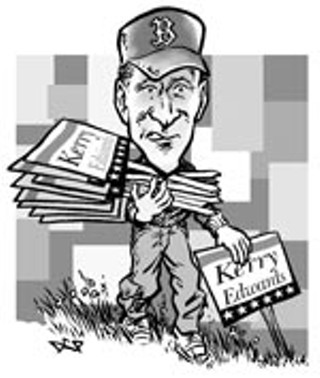 Actually, they're not all useless, but some of the most useful ones may not exist. The Chronicle News staff offers this year's highly unscientific selection of seasonal political gifts, with a word to the wise: Some are real, some are not. You be the judge.

Some day, all those bumper stickers you bought from Two Unemployed Democrats are going to be worth something to somebody (provided you didn't actually attach them to your car). If you'd like to join those who make a hobby out of our political process, here's your starter kit, with info on election tchotchkes going all the way back to the 1789 campaigns.

Since Bush won last month, never have so many liberals seriously contemplated living abroad. A Daily Texan columnist even asked for funds in print to help him relocate to New Zealand, and the Young Conservatives of Texas offered to help. Seriously, though: Move if you want to – it never hurts to broaden one's horizons – but by all means, keep your U.S. citizenship. Hubert Vo's 33-vote margin of victory in one Texas legislative race proves that every vote really counts.

Fool your friends and those pesky DPS helicopters (not too hard, actually) with your very own silk marijuana plant. According to the silk plant's retailer, Silk Weeds, the plant is a masterful replica of its illegal brother, featuring "perfect color and branch configuration," with both five- and seven-petaled leaves, set on opposite branches. "As a centerpiece or on a shelf, it cannot be ignored," raves Silk Weeds' Web site. Ordinarily $24.95, the plant is now on sale for just $19.95. To order, go to www.silkweeds.com.

A Texas (or U.S.) House District

Other people's money. Lots of it.

For the go-getter who's got it all – except enough votes to win – there's more than one way to skin the voters. If you can't do it by re-redistricting, and if massive amounts of campaign cash still don't push you over the top, just bring a challenge after the fact and toss the race to your buddies (many of whom are beneficiaries of redistricting and massive amounts of corporate campaign cash). Is this a great country, or what?

Do you have canines and guitarists on your shopping list? You can cross 'em both off with one online stop at www.kindk9-humanhemp.com, an Austin-based company that deals in hand-dyed hemp-fiber guitar straps, dog collars, belts, and watchbands. That's right, industrial hemp from Austin: keepin' the holiday season weird and environmentally friendly! For more info, send an e-mail to mail@kindk9-humanhemp.com, or call 282-3366, 10am-7pm, Monday through Saturday.

Perfect for that friend who dreams of green in new Hill Country developments. Just moisten the miniature exurban street, apply Chia seeds around the sized-to-scale McMansions and three-car garages, and watch the barren landscape spring to life. Seven-figure profits not included (but expected).

Reading and toking go hand in hand with The Cannabis Companion: The Ultimate Guide to Connoisseurship, by former High Times magazine editor Wishnia. The book details the herb's history – and its run-ins with the law; a glossary of toker terms; instructions on rolling spliffs, blunts, and joints; a guide to herb-smoking etiquette; and a spoonful of cannabis-cooking ideas – from "Pleasin' Pot Pesto" to a gourmet recipe for that all-time favorite, the ganja brownie. Order online from BookPeople at www.bookpeople.com.

Sure, that Hummer is as rough and rugged as the man behind the wheel. But at the end of the day, even your badass behemoth likes to be babied. Wrap it in this quilted cozy to protect it from dings, dents, avian effluent, and tree-hugger graffiti. Available in five unique designs: "American Eagle," "America Kicks Ass," "Jesus Is My Co-Pilot," "SpongeBob SquarePants," or "I'm a Hummer-Drivin' Honey" (available in Tea Rose, Sunset Blush, or Periwinkle Dreams).

So, your sister moved to 78704 hoping to enjoy quiet, suburban-style living, only to find her dreams shattered by visitors treating South Austin like some kind of a city or something, where people park their cars on the street! Save her the indignity of having to gaze upon strangers' Toyotas with the Invisible Fence™. One encounter with its jarring (but nonlethal) 200-volt electrical shock, and unwanted visitors quickly realize they should go sully the view from someone else's bungalow!

Less than a bag's worth

For the drug-reformer/clotheshorse, look no further than the National Organization for the Reform of Marijuana Laws, the nation's oldest organization of pro-cannabis crusaders. From T's featuring the classic NORML logo to baby-doll shirts with snappy, modern-day tag lines like, "Fight Terrorism, Buy Domestic," NORML's got the gear that satisfies. To browse and order, go to www.cafepress.com/norml.