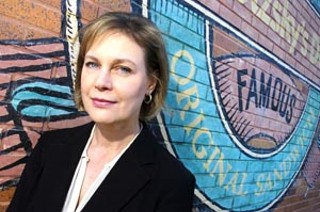 Schlotzsky's investor Susan Engelking ripped into CEO Sam Coats for selling the company at auction, with no benefits going to holders of the company's now worthless stock. (Photo By John Anderson)

Last Thursday morning, Sam Coats stood beneath an enormous red bow adorning a strand of artificial garland and beamed like a choirboy. The occasion for his good cheer stemmed from the sale of bankrupt Schlotzsky's Inc. to a Fort Worth restaurant company steeped in West Texas oil money. "They basically agreed to write a check," Coats said of Bobby Cox Companies Inc., which cast the winning bid of $28.5 million at a Dec. 7 auction in Dallas. A bankruptcy judge in San Antonio approved the sale the following day, and the week's events were topped off by a heated shareholders meeting at the Doubletree Guest Suites in Austin, where Coats made the announcement.

For Coats, who was hired as Schlotzsky's chief executive in June to try to save the sinking sandwich chain, the sale represents the end of a busy six-month assignment that the company's directors handed him moments after they fired ex-CEO John Wooley and brother Jeff Wooley, who was a senior vice-president. Coats, a former airline executive, looked happy to be passing the torch to the new owners, who have until Dec. 31 to close the sale. "It will be a great Christmas present to all of us," he told the crowd of shareholders, franchise owners, and employees of the Austin-based chain. In what sounded like an afterthought, Coats noted that Schlotzsky's would no longer operate as a public company. "There will be no recovery to common shareholders," he said.

The shareholders in the crowd, many of whom appeared to be senior citizens or baby boomers approaching retirement, shifted in their chairs and frowned unhappily over the matter-of-fact declaration that their already deflated holdings were now beyond resuscitation, and that the sale of the company would effectively wipe them out of every dollar they had invested in the operation. Moreover, a judge's blessing of the sale had rendered the shareholders meeting – the first since June 2003 – pretty much pointless, though there were not enough shareholders on hand to constitute a quorum anyway.

By then, though, more skeptical shareholders had already predicted that the week's events – from the auction, to the courtroom, to the shareholders meeting – would follow a carefully scripted company plan, right down to the lack of a quorum. As they saw it, the company timed the events to bring a swift end to this chapter in Schlotzsky's bankrupt life – just in time for Coats, the financial consultants, and a cast of bankruptcy lawyers to collect their end-of-the-year bonuses.

The timing, said shareholder Susan Engelking, is the reason the company turned down a bid that was more than $5 million higher from Serious Buns LP, a consortium of investors that included the owner of La Madeleine. Serious Buns would not have been able to close on the sale until Jan. 31. Too late, Engelking surmised, for officials to benefit from Christmas bonuses. (Schlotzsky's officials later responded that there had been no guarantee that the consortium would in fact be able to close by Jan. 31.)

"You never were interested in reorganizing this company," Engelking told Coats, in a stern dressing-down of the CEO during a Q&A session. Coats had already attempted to shoo her away from the microphone, over protests of "Let her talk," from the audience. So Coats let her talk. Engelking, an Austin public relations consultant and longtime Wooley friend, noted that her 9,303 shares were worth $14,000 at the time Schlotzsky's filed for bankruptcy Aug. 3, and will be worth zero with the sales transaction. Her point was meant to counter Coats' contention that shareholders "were wiped out" before he took the helm.

Rather, Engelking accused Coats of starting the company down the path to bankruptcy on the day he accepted the CEO post, despite "serious offers" from other entities that would have kept Schlotzsky's afloat as a publicly traded operation. Another offer, from Dallas-based Gryphon Master Fund LP, arrived as late as a week ago – too late, apparently, to keep the auction process from moving forward.

Once the sale to Bobby Cox is finalized, the proceeds will be divvied up between the larger creditors, namely Commerce National Bank and NS Associates, said company spokeswoman Anne Braidish. How much other creditors might get is still uncertain. An estimated $1.3 million will go to attorneys.

Not all who attended last week's meeting were angered by the sale of the company. Several franchise owners cheered the acquisition and said it couldn't have come at a better time. One franchisee noted that the sale might have come too late for some restaurant owners. "I know a lot of franchisees out there who are not going to have a good Christmas," said Pete Morgan, who had driven all night from Pensacola, Fla., to attend the meeting. "Let's be done with it, folks," he said, referring to those who were calling for a delay to allow for another shareholders meeting. "Let's move on."

The Wooley brothers stood silently at the back of the room. They took a few hits from critics in the crowd who accused them of causing the company's downward spiral in the first place. Those critics included Schlotzsky's co-founder Delores Dissman, who with her husband opened the first Schlotsky's on South Congress in 1971 and sold the popular chain to the Wooleys in 1981. Turning to the shareholders, Dissman implored, "Why didn't you watch the [company's] financials the last five years?" (As an interesting footnote to this story, Austin-based Mr. Gatti's Inc., which at one time considered buying Schlotzsky's from the Dissmans, was also sold last week to a local private equity firm, Blue Sage Capital.)

Schlotzsky's directors, a slate of high-profile personalities who were handpicked by John Wooley, sat quietly through much of the meeting. Afterward, director Pike Powers expressed sadness over what he viewed as a necessary journey through bankruptcy, but added, "I really hope the new owners do beautifully."

Wooley, the company's largest shareholder, who with his brother loaned the sandwich chain $5 million prior to their firing, will receive nothing for what he put into the company over 23 years. Needless to say, Wooley would have written an altogether different version of this chapter in Schlotzsky's history had he been given a say in the matter. But he said he harbored no ill will toward the new owners. Based on what he's heard from others in the industry, the Cox restaurants are solid business operations, he said.

The new owners control a wide range of business entities, with restaurant holdings outside of Austin including Rosa's Cafe, Taco Villa, Texas Burger, and Rosa's Cafe & Tortilla Factory. Cox, described in news reports as a self-made Odessa businessman, also owns 36 franchised Blockbuster Video stores. Under the new Schlotzsky's structure, Cox will preside as company chairman, while Odessa restaurant owner and real estate developer Bob Barnes will serve as president. Ronny Jordan, a senior official at the Cox Fort Worth headquarters, will become the chief financial officer of the sandwich chain.

In the long run, Schlotzsky's observers could see a change in the company's corporate culture. The Austin-centric organization under Wooley carried a progressive flavor, as evidenced by its board of directors, which included Sarah Weddington and John Sharp. Cox, on the other hand, gave generous financial support to Sharp's last opponent, David Dewhurst, along with other GOP winners in the 2002 elections. And Barnes, who mounted an unsuccessful GOP challenge to former state Sen. Teel Bivens, R-Amarillo, is a leader in Texans for Lawsuit Reform, an anti-tort group that endorsed Barnes' bid for the senate seat.