Water Gushes Forth From LCRA 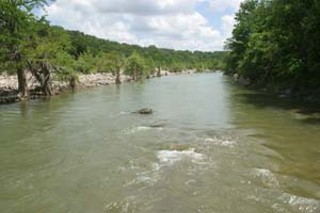 Environmentalists and neighbors worry that views like this, of the Pedernales River, could drastically change when LCRA starts expanding water service to the Hill Country. (Photo By Jana Birchum)

The pipeline project is opposed by hundreds of Hill Country residents, area environmentalists, and at least two elected officials, who were left scratching their heads over the board's predictable yet befuddling vote on Dec. 7 to provide surface water to new residential developments slated along the narrow two-lane road. With the water agreements, at least two of the new subdivisions are positioned to begin accelerating their plans.

And LCRA water officials are not stopping with last week's success. At this week's board meeting, the board was expected to approve the first step toward the utility's next target – Spicewood, another Hill Country community where new developments could easily spring from the rocky terrain before a regional plan takes effect. The utility seeks to apply for state funding for a Spicewood Regional Water and Wastewater Planning Study. The study, focusing on the area along the Highway 71 corridor between Spicewood and the Pedernales River, would review the water and wastewater needs of anticipated growth in eastern Burnet Co., according to LCRA documents.

Leaders of the Hill Country Coalition, a multicommunity organization that seeks to preserve the rural landscape through regional planning, say that while they are dismayed by the LCRA's actions last week, they are more curious about the utility's rush to seal the water deals, when the utility was under no deadline or legal obligation to act quickly. "We feel there's more to this than meets the eye," said Christy Muse, a Bee Creek area resident and coalition leader. "We want to get to the bottom of this. We're not going away."

Opponents of the Hamilton Pool Road pipeline had hoped the LCRA would delay action in deference to three regional planning processes under way, the largest of which could lead to the implementation of water quality regulations in this relatively lawless area of the county. Meanwhile, Gene Lowenthal, a fence-line neighbor to one of the developments planned along Hamilton Pool Road – Rocky Creek Ranch – said he plans to contest the development's wastewater permit application on review with the Texas Commission on Environmental Quality. The challenge to the application could guarantee the development's delay by several months, he said.

The developer, Rebecca Hudson, has put forth a wastewater treatment proposal involving effluent spray irrigation over an undeveloped portion of her property. However, Lowenthal and environmental consultants believe the spray system could prove environmentally disastrous because the region's thin, rocky soil is incapable of absorbing the waste from the 468-home subdivision. They say the irrigation system could prove especially hazardous to Rocky Creek (and other waterways that feed Barton Springs) during long periods of rainfall.