Observer to History at 50 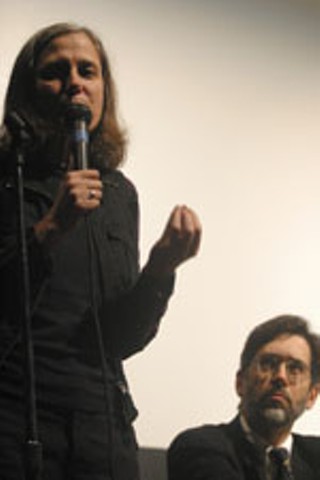 Democracy Now! radio host Amy Goodman discusses politics and the media at last Saturday's symposium. Behind her is Matthew Rothschild, editor of The Progressive magazine. (Photo By Jana Birchum)

Amid the congratulatory hullabaloo surrounding Tom Brokaw's bow from the airwaves this week came a more modest celebration of a much grander achievement: The Texas Observer, muckraker of proudly progressive politics, turned 50, marking the occasion at the State Theater with an all-day symposium titled Lowering the Bar: The Role of the Media in the 2004 Presidential Election. 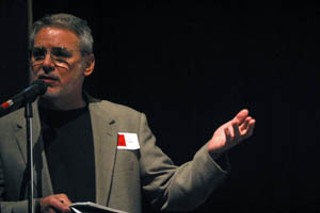 Former Texas Observer editor (and former Chronicle politics editor) Lou Dubose said that "The press did for Bush in public what Monica Lewinsky did for Clinton in private." (Photo By Jana Birchum)

As a postmortem to an election year dominated by manufactured controversy and partisan punditry, the first of Saturday's three discussions was appropriately titled What Happened?, moderated by former Observer Editor (and former Chronicle Politics editor) Lou Dubose. TO founding editor Ronnie Dugger came out swinging, speaking for the panel's majority in his indictment of the mainstream media's noncoverage. Recounting firsthand his "unfortunate experience spending seven minutes in Sean Hannity's alleged news studio," Dugger decried the "ethical hell" of corporate media's most egregious offender. Fox News "is a propaganda mechanism called a network, which is a disgrace to American television, and an outrage to the American people," Dugger boomed to deafening applause, and he advocated license challenges to Fox affiliates, in addition to a boycott of Fox News Corp. and other "red" companies.

Molly Ivins, who spent her own stint as an Observer editor, calls herself "optimistic to the point of idiocy," yet she echoed Dugger's indictment of a market-driven media, resulting in, among other things, a growing schism between critical, quality press and sensational, tabloid journalism. In such an environment, she warned, "it's critically important to keep small, independent voices like the Observer alive," because smaller stories from its pages, like the scandalous Tulia drug busts, "go up the food chain."

Former New York Times political correspondent Adam Clymer – notorious for being called a "major league asshole" by candidate Bush in 2000 – spoke next, and took a passing shot at the Supreme Court. When an audience member yelled that Bush "never got elected," Clymer responded, "I always thought five-ninths was a majority." Speaking to the "remarkably overanalyzed" aspects of Nov. 2, Clymer noted that despite the "moral values" storyline regurgitated ad nauseam by the media, self-defined "moral" votes were actually fewer in number than in previous years. More damning, in Clymer's judgment, was the "false equivalence" promulgated in the press in comparing the two candidate's public gaffes. Kerry's feet would be held as firmly to the fire as Bush's over far less important matters, said Clymer, in a misleading balancing act. As Dubose put it, "The press did for Bush in public what Monica Lewinsky did for Clinton in private."

In the following panel, a rumination on the issues not covered in 2004, Matthew Rothschild, editor of The Progressive magazine, continued on the media's complicity in the president's re-election via softball sound bites. "The media did not raise issues that were crucial to be raised in our democracy, and as a consequence, the American people were uninformed, ill-informed, and voted on personality, not on substance. We've got to change that." 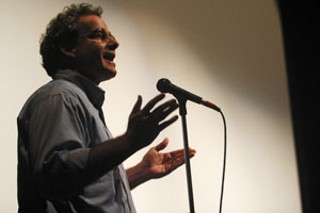 Democracy Now! radio host Amy Goodman offered some solutions, demanding more independent networks of information, after decimating the sanitized, embedded coverage of Iraq. Adding levity to the proceedings was Texas populist and local luminary Jim Hightower. Decrying the replacement of higher paying jobs with "Wal-Mart jobettes," he was aghast at how the engineers of economic woe, poster boys for corporate greed like Bush chum Ken Lay, were not used by the Kerry campaign against the incumbent. Shifting gears, he assailed Bush's made-for-TV ranch and faux cowboy trappings, noting, "There's a $1,000 hat on a 10-cent head if I've ever seen one." A lively Q&A session ensued, including an acerbic aside from former TO Associate Editor Lawrence Goodwyn, suggesting that progressives should drop the mantle of the embattled minority. "There's a lot of self love going on up here."

Emmy-winning documentary filmmaker Paul Stekler's "Texas Observer at 50," a short tribute to the publication, played later that afternoon, introduced by Texas Monthly Editor Evan Smith who described the journal as his "only worthy statewide competition." Stekler was on hand afterward, with fellow doc director Laura Dunn and film producer Elizabeth Avellan, in a panel discussing the entertainment industry's electoral impact.

Fittingly, the event ended at the nexus of entertainment and electoral politics with a prerecorded visit from Jon Stewart at his Daily Show desk. Perhaps there was something to Stekler's words earlier, that Southern progressives make for "much better company." Citing their sense of humor, inherent in pundits like Hightower, Ivins, and the pages of Observer, Stekler concluded, "They lost a lot, but they're still functional."