The Mueller deal is done, but that doesn't mean the process is over

The latest Mueller plans call for "employment centers" – including the Dell Children's Medical Center, a possible UT "academic health center," a regional-retail complex, and the Austin Studios – along the northern edge of the old airport. New mixed-use residential neighborhoods fill in the center and southern reaches of the 711-acre site, with the "town center" along the western edge near Airport Boulevard.

As expected, the Mueller master development agreement between the city and Catellus Austin touched down smoothly last week at City Council; except for some straggling paperwork involving the creation of the tax-increment district that will support Mueller's $46 million in public financing, the 1,000-page deal is done. But while some Mueller watchers have now arrived at their final destination, others are hurrying to catch their next plane – taking them on the 10-year journey to actually build the project crafted during the past 20 years of dreaming, 10 years of planning, and two years of negotiation with Catellus.

"This is a halfway milestone," says Jim Walker, leader of the Mueller Neighborhoods Coalition, chair of the city-appointed Mueller Advisory Commission, and acknowledged community point man for the Mueller project. "The MDA doesn't mark the end of any community conversation regarding the social goals at Mueller. Not a single community leader around Mueller now thinks this is all over."

Walker, who naturally gets an earful from activists of like mind in his broader role as a progressive leader (Liveable City, Envision Central Texas, Central Texas Sustainability Indicators Project, etc., etc.), singles out leaders "around Mueller" for a reason; the near-neighbors to the old airport have done most of the heavy lifting on this project for decades, with their citywide cohort basically kibitzing. "There's still a critique coming from the left," he says, "from people who want more affordable housing, more performance on social goals, and who are afraid that, now that the contract's signed, Catellus will turn into Mr. Hyde. But nobody believes me when I say there's still plenty of room for more people to get involved here." 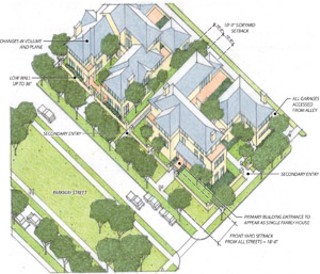 Among the different types of housing envisioned at Mueller are, well, "Mueller houses" – designed to look like big mansions, but actually including four or six or eight separate units. This has proved a wildly popular option at other sites around the country; right now, Mueller houses are slated to line the east-west boulevard connecting Mueller's elementary school to the Town Center and "Lake Park."

The most vocal exponent of the left-flank Mueller critique has been Mary Lehmann of the ad hoc group Keep the Land, which unsuccessfully lobbied for the city to lease, rather than sell, the old airport's 700 acres – a change to the basic premise of the project that would have effectively scotched the Catellus deal. Lehmann sounded a rare discordant note among the week's chorus of congratulations, issuing a press release claiming she has "a great respect for the dedicated citizens who supported the Mueller agreement, but we live in a city with media silent on the subject of money going to developers that ought to be serving citywide needs."

Of course, considering the scale of the Mueller project – the largest development deal in Austin history – the fact that no more formidable foe than Mary Lehmann can now be seen is one hell of an achievement for the city, the neighbors, and Catellus. (The price for such consensus was a lengthy timeline, which earned a typically reflexive passing cheap shot last week from the Statesman editorial board.) "We've always wanted Mueller to set a new standard," Walker notes, "and what we have now is a lot more than just a pretty picture. But there will always be a lot of moving parts; even if the MDA were 10,000 pages long, it wouldn't bring us any closer to working out all the issues in advance. A project like this involves a long-term commitment. It simply does."

Going forward, the Mueller posse is carefully grappling with issues that may have shifted during flight. Among these is the recently emergent prospect of a UT academic health center – something similar to, but not quite the same as, a "medical school" – occupying the acreage north of the new Dell Children's Medical Center in the northwest quadrant of the Mueller site. This 15-acre parcel was called out in the MDA for potential special treatment, but the project is so embryonic, and so prone to political pitfall, that it's still unclear whether that will be enough land to satisfy UT's eventual desires, let alone what exactly the system would build there.

For its part, the community side has already settled on a talking point: "It's exciting that UT could be a part of all the positives in this process that we've started," says Walker. "We all see the benefits of having UT at Mueller in a dense, mixed-use urban campus." Translation: UT should resist the temptation to bigfoot its way into Mueller and instead should play ball with the community-driven process, as did the Seton Healthcare Network and, before it, the Austin Film Society. And UT should build a medical-school-like-thing that looks and feels like the dense urban campus slated for the site in the adopted Mueller master plan, instead of sprawling out hither and yon just because it can.

Another potential source of turbulence on the next leg of the Mueller journey will be affordable housing. While Catellus has, as part of the MDA, agreed to what even skeptics say are more ambitious affordability goals than Austin usually sees, advocates still seek a way – at Mueller as elsewhere – to keep those units affordable as property values inevitably rise, while still allowing entry-level homeowners to build equity. Right now, the main safeguard for long-term Mueller affordability is structural – the homes and rental units are simply smaller, and cheaper to build, than the Austin norm. The MDA includes a resolution wherein Catellus and the city pledge to use their "best-faith efforts" to keep moving the affordability ball forward.