Bicycle Nomads and the Winds of Change 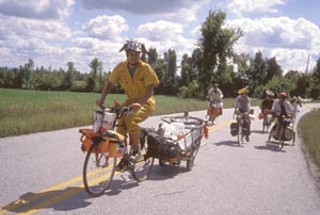 What community-minded, ecologically grounded lessons might be learned from a group of bicycle nomads, circus performers, musicians, biologists, artists, and mechanics about to bolt for Mexico? That's a question raised by the third annual Bikes Across Borders Winter Bicycle Migration.

Scheduled to depart in successive waves beginning Dec. 16, the 2,000-mile, three-month bicycle journey to Mexico is described by organizers as a mission to build solidarity partnerships by promoting autonomous transportation and cultural arts. It also represents innovation in economic sustainability and cross-cultural relations. Since 2001, Bikes Across Borders (www.bikesacrossborders.org) has delivered more than 500 bicycles to Mexico, Cuba, and Central America – mostly bicycles refurbished from Texas' briskly-flowing waste stream.

The shipments of recycled and donated bikes, parts, and tools supply new and existing bike shops for village collectives or ejidos, and will be used by migrant and maquiladora (NAFTA-driven border assembly plant) workers and Mexican field biologists. Along the way, riders perform circuses designed to bridge cultural gaps, like "The Migration of the Monarch," a puppet show addressing the impacts of industrial agriculture, NAFTA, government corruption, and environmental devastation.

The international outreach by way of traveling caravan is certainly not a stand-alone initiative; BAB is part of a grander design incubated here in Austin at the Rhizome Collective (www.rhizomecollective.org), a consensus-run educational center for urban sustainability and community organizing. "Seasonal bicycle migration represents a radical departure from mainstream activism," says organizer Ed Sapir. "We are creating an entirely new way of life based on ecological and social activism, nonpolluting energy sources, international community, and do-it-yourself technology." Sapir envisions a network of self-sufficient communities built around "eco-pueblitos," bike shop/garden paradises that meet citizens' food and transportation needs with locally grown in-season foods and human-powered mobility.

The migration complements efforts by the National Bicycle Greenway movement (www.nationalbicyclegreenway.com) to advance a nationwide system of interconnected bike roads and pathways, promoting cycling as a mode of transportation for consideration by engineers, planners, and policy-makers. "Winter migration south by bike saves fossil fuels by relying on human power and not having to heat the house," says rider and local activist Juan Martinez. He calls the Rhizome efforts "post-oppositionalism" – a "nonreaction" to the power elite's economic and foreign policy actions. "We are creating something genuinely unique from our resources as we exercise power as a collective, using these shared resources to redistribute wealth through the salvage component in Texas to places where it is extremely useful."

Call it localization vs. globalization: "We are searching out human affinities, reconnecting with nature and our southern neighbors, promoting better health, and addressing many of our pressing environmental concerns," Sapir concluded.

Rhizome's Bikes Across Borders grew out of Austin organizations like the Yellow Bike Project, which also refurbishes and donates discarded bikes, and the local antiwar group Bikes Not Bombs. BAB first coordinated shipments with Comite Fronterizo de Obreras (Committee for Border Workers), a group of organized sweatshop workers along the border, donating more than 80 bicycles and a complete tool set. "We are crossing borders of race, class, and gender," said Martinez.

Over the years BAB has teamed with Pastors for Peace, a ministry of the Interreligious Foundation for Community Organization created in 1988 to pioneer the delivery of humanitarian aid to Latin America and the Caribbean in shipments to Cuba and Chiapas. This year's donation is focused on communities in Tamaulipas, while plans are being drawn up for subsequent efforts to benefit new immigrants in El Paso and Austin Refugee Services here at home.

"While cars whiz you swiftly through the countryside oblivious to nature's subtleties, the bicycle lets you feel the wind on your cheek, observe fragile desert cacti in bloom, and catalyze conversation with random strangers walking along," Sapir said. Martinez added, "Seasonal migration by bicycle liberates us from the cubicle-car-career matrix and engages us directly with nature and our fellow humans."

The invitation to the Winter Migration is open to anyone who wishes to live in tune with nature, camp under the stars, and float on the great northern winds like migrating birds. "Don't be surprised when we top 100 miles in a single bound after a leisurely breakfast of wild-crafted grains, homemade tortillas, and fresh fruits," said Sapir. The Rhizome Collective, at 300 Allen on the Eastside, has opened the doors to its community bike shop operating Tuesday and Thursday evenings 6-10pm, and will host a benefit event on Friday, Dec. 10, 5pm-12mid. Contact BAB directly at pedalpower@gmail.com or call 769-9691.