Here's a thumbnail update on the developments-in- progress in Western Travis Co. 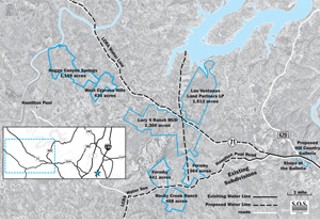 Some updates are in order for these western Travis Co. development hot spots since our last report in May ("Westward Ho!," May 28, 2004). As the map indicates, the proposed Hamilton Pool Road pipeline is just the foot in the door; also under serious consideration are a much longer line along Highway 71 and smaller feeder lines.

Of the three proposed subdivisions pending along Hamilton Pool Road, landowner Rebecca Hudson's Rocky Creek Ranch plan has received preliminary approval from Travis Co. and now awaits a Dec. 7 decision from the LCRA on a proposed water pipeline that would provide surface water to the project. Plans for the two Formby properties are still on the table.

Shops at the Galleria

This commercial center, under construction across the road from its future twin, the Hill Country Galleria, has recently run afoul of state inspectors for faulty environmental controls that failed to prevent construction runoff from polluting Little Barton Creek during recent rainstorms. The Texas Commission on Environmental Quality has ordered developers to correct the problems, but has issued no sanctions.

Up the road, developer Rusty Hill appears to have finally gotten his storm water detention pond and dam under control after more than a year of pollution disasters on Lick Creek.

There's been no movement recently on this proposed project near Lake Travis.

It's likewise quiet here, where landowners are said to be mulling some sort of conservation-friendly development, unlike other run-of-the-mill subdivisions in the works.