The Smoke Clears In Lege Races Democrat Kelly White picked up 24 votes and narrowed her loss to Republican state Rep. Todd Baxter to 147 votes after Monday's count of provisional and overseas ballots, but the White campaign is now considering whether to pursue a costly examination of more than 100 ballots tossed out of the mix. Regardless, White is still expected to seek a recount in the District 48 House race. A recount would be a long shot, supporters agree, but not an unreasonable request given Baxter's wafer-thin margin of victory.

Before Monday's count, Baxter held a 171-vote lead, out of more than 69,000 votes cast in the two-candidate race. A reconsideration of those provisional ballots deemed ineligible could also narrow the margin; White campaign consultant David Butts said only about a third of the 163 provisional ballots cast in District 48 made the cut. Those that were thrown out contained the types of careless errors one makes when hurriedly filling out a form, Butts said, such as entering a birth date with the year 2004, for example, or omitting pertinent information.

White had initially planned to file for a recount Nov. 5 but opted to delay action to allow time to move out of her campaign office. A campaign spokeswoman said White would likely file her request this week. The recount will mark a first since the county switched from paper ballots to electronic voting in 2002.

Even if a ballot recount confirms Baxter's victory, local Dems say they still find the outcome of the District 48 race encouraging – that a Democratic candidate came within a hair's breadth of winning a district designed to be solidly GOP. "For Kelly to do that well in that district shows that there will be enough votes there for a Democrat to win two years from now," Texas Democratic Party Chair Charles Soechting said in anticipation of the 2006 legislative races.

Should Baxter survive the recount, political junkies are already speculating whether the close shave would humble him or embitter him, given the contentiousness that turned the race into a mud fest in its final weeks. Polling conducted in the last month and a half consistently showed White gaining ground in the district, where Baxter had been the odds-on favorite at the start of the race. White's campaign was slow to take off, observers say, but the first-time hopeful proved a quick study and a competitive candidate against the more politically seasoned Baxter.

This, of course, was not what Republicans had in mind when they carved out a Northwest Travis Co. district to guarantee a GOP victory in 2002 and beyond. Fearing the worst as the days sped toward the election, party leaders staged a last-ditch effort to prop up the Baxter campaign with additional cash, dropping more than $141,000 into his bucket, including a lump sum of $65,000 from Stars Over Texas.

Meanwhile, their man in District 50, state Rep. Jack Stick, was also hanging by his fingernails in a tight race against Democratic newcomer Mark Strama, who ended up winning in the final hours by just 556 votes. Stick picked up a late-arriving $162,500 from Stars Over Texas and another $15,000 from Swift Boat sugar daddy Bob Perry, the Houston homebuilder. White and Strama each got their own late boost from trial lawyers whose political action committee, Texans for Insurance Reform, helped fuel several Democratic legislative races. The group gave Strama $32,500 and White $25,000.

In District 50, there weren't enough overseas and provisional ballots cast to overcome Strama's edge. Republicans represent the larger share of the north/northeast district's voters, but Strama points to his victory as evidence of Stick's failings as a representative. "The last two years of leadership in the district didn't address the needs of the district or the state," Strama said. Voters may have also been turned off by Stick's last-minute campaign mailer, which showcased his recent wedding as an opportunity to go on record in opposition to gay marriage and noted that Strama was endorsed by the Austin Lesbian/Gay Political Caucus.

District 50 Republicans who couldn't bring themselves to vote for a Democrat may have instead given Libertarian candidate Greg Knowles a big bounce on Election Day. Knowles earned nearly 2,400 votes in the race, more than half of them on E-Day itself (reversing the pattern for almost every other candidate on the ballot). "Seventy-five percent of voters in the district said they wanted a change," said Strama.

It helped that George Bush's popularity was on the wane throughout Travis Co., added Butts. "The indictments coming down against [Texans for a Republican Majority], and Baxter's rather hollow denial that he had received $35,000 in illegal campaign money also helped the Democrats," he said, referring to the ongoing criminal probe of TRMPAC's campaign spending in the 2002 legislative races. Baxter and Stick both benefited from TRMPAC's role in the contested House races that year. 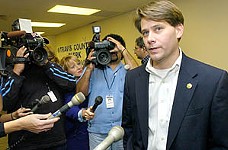