No matter who wins the election, Iraqis awaken to occupation, devastation, and slaughter 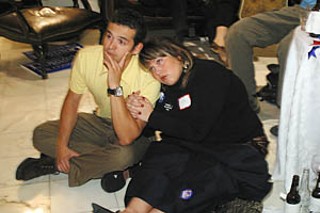 Unless you were very alert last week, you missed one of the most important news items to come out of Iraq this year: the first serious attempt to estimate accurately the number of civilian deaths in the war. On Friday, Oct. 29, the British medical journal The Lancet published online a study produced by a group of U.S. and Iraqi scientists, led by the School of Public Health at Johns Hopkins University. Based on in-person, on-site surveys in September of about 1,000 Iraqi households all over the country, and extrapolating from that sample, the researchers estimate, "Making conservative assumptions ... that about 100,000 excess deaths, or more, have happened since the 2003 invasion of Iraq. Violence accounted for most of the excess deaths and air strikes from coalition forces accounted for most violent deaths."

The estimate excludes deaths in the city of Fallujah, although the researchers did gather information there during the most violent recent period, and the number of violent deaths was much higher there than elsewhere – so those totals were excluded to avoid skewing the overall estimate upward. (If those deaths were included, the estimate would be much higher, possibly as many as 194,000 deaths.) But throughout the country, "Violent deaths were widespread ... and were mainly attributed to coalition forces. Most individuals reportedly killed by coalition forces were women and children."

Both the U.S. and British governments were quick to dismiss the report's findings, pointing instead to the much lower estimates calculated at IraqBodyCount.net, now at about 15,000, and based entirely on media-reported deaths. Yet those counts (addressed in the study) are limited by definition, and it is grimly amusing to see authorities otherwise uninterested in talk of civilian casualties suddenly approving a number they previously dismissed. It is possible the Lancet study number is too high (or too low), although the methodology appears sound and the report was subject to rigorous independent review before publication.

Wouldn't you at least expect that such a catastrophic and important result would be subject to the sort of exhaustive analysis and urgent political debate devoted to the negligent misplacement by U.S. forces of a few hundred tons of high explosives? Instead, if you weren't paying attention to a few brief, buried stories in the national press or more thorough international coverage over the weekend, you will have missed all reference to the 100,000 dead.

More of the Same

"The toll far exceeds all previous estimates," reported the Times of London, "and the survey's publication [Friday] – just days before the U.S. presidential election – was bound to cause controversy by reinforcing the impression that events in Iraq were out of control." That might be true, if anyone in U.S. politics or media were actually paying attention. In Texas, we were protected from such unseemly misgivings – of the six major dailies, only the Houston Chronicle mentioned the Washington Post so as to highlight its subhead: "Experts dispute method employed to arrive at tally" (helpfully illustrated by a father mourning a child killed by an insurgent bomb). Yet all these papers have duly headlined the slightest sneeze of the pre-election polls, based on instant telephone questionnaires of much more dubious reliability than the Lancet study.

I note this all on Tuesday morning, with the presidential election still in doubt, but with U.S. troops massing again outside Fallujah, and Iyad Allawi, the mini-Hussein appointed as our Iraqi regent, impatiently awaiting Nov. 3. "The time is closing down, really," he told reporters last week. "We are approaching the end." Whoever wins the election, the people of Fallujah can look forward to Allawi's "decision" to attack, and hundreds or thousands more uncounted casualties ignored or dismissed in the U.S. press.

It is within this cavalier bubble of willful ignorance and moral blindness, of course, that the entire presidential campaign has taken place. Reporter Seymour Hersh, in town this week for the Texas Book Festival, aptly summarized the extent of the political "debate." "Kerry says he will send more troops, he will recruit more special forces, he will bring in foreign support – hoping to change the nationality of the corpses," Hersh said. "And Bush responds, 'Liberal, liberal, liberal, liberal!'" Hersh was blunt about the urgent need to defeat George W. Bush – "I don't think there's any question that Bush is good for terrorism," he said, and pointed out that Bush's only strategy for Iraq is more and more of the same spectacularly failing military strategy.

But Hersh was also under no illusions about the immediate prospects of a John Kerry presidency. "He keeps insisting that he has a plan to win the war in Iraq," Hersh said. "He needs to learn, quickly, that this war is unwinnable." Unwinnable, certainly, but increasingly devastating to ordinary Iraqis; Hersh noted that another woefully underreported story of the last few months is the steady, monthly increase in U.S. bombing – the very strategy that has led to the thousands of civilian deaths only broadly estimated in the Lancet study.

So that's where things stand on the morning of the election, at least regarding what should be the central and overwhelming issue of the presidential race: How shall we stop this colossally stupid, barbaric, illegal, murderous war against – not "terrorism," since it is now confirmed as indubitably state terrorism on a gigantic scale – the people of Iraq? Whoever wins this election, that question remains, and it will not be decided by the vote alone, or even primarily by the vote. It will be decided by a national and international movement and outcry against the war, ultimately forcing the hand of whoever might be selected president of the empire.

The full study, "Mortality before and after the 2003 invasion of Iraq: cluster sample survey," by Les Roberts, et al., is posted online at www.thelancet.com.
More Capitol Chronicle columns