An Island in the Red Sea 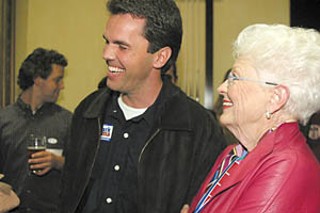 Do you feel united yet? Both John Kerry and George W. Bush, in their respective speeches on Wednesday, urged reconciliation after the bitter battles of the last year or four. This did not stop protesters from flocking to the State Capitol Wednesday night to do otherwise, but local disgust at the God-gays-and-guns-driven Democratic disaster was washed by a deep blue Travis Co. tide – including a resounding victory for Lloyd Doggett, a much-appreciated squeaker for Mark Strama, and a juggernaut of a commuter-rail race. Although voter turnout fell short of County Clerk Dana DeBeauvoir's prediction of "record-setting," it was nonetheless an impressive 61%. See p.24 for the Congress scorecard, p.26 for the Lege rundown, and p.28 for county and local races. (Incumbents in the results charts are marked with an asterisk.)

On the afternoon of Election Day, early exit polling suggested that John Kerry had the race in the bag, but even aside from that buzz, the headquarters of the Travis Co. Democratic Party's Coordinated Campaign (aka Austin for Change) was animated with good feelings. "We've had hundreds of people through here since 7am," said local activist Robin Rather, acting as traffic cop at the corner of Red River and Davis Streets, where the campaign's volunteer center had set up an impromptu drive-thru operation for volunteers coming for signs, block-walk sheets, and other instructions. As she spoke, another campaign worker approached her, pointing toward two women in a sedan idling by. "They're looking for some action," he said.

Inside, campaign director Mark Yznaga (who took over from Glen Maxey) and other local Dem luminaries mixed with dozens of volunteers, many of them college-age, trying to keep up with the donkey fever. "We had 20 people waiting at the door at 5am," Yznaga said. "We were frankly unprepared for this level of interest. This is a tidal wave moving through the town. Everybody feels it. We're just trying to hang on." Or, as Yznaga's colleague, consultant David Butts, later put it, "The energy that's driving people this election powers them along to put up with crap," referring to the often-drudgeful work of E-day campaigning. "You can't buy that kind of energy."

The Coordinated Campaign, in addition to the volunteer operation, operated a legal office, a voter-help hotline, a phone-bank center, and a data analysis center (dovetailing at the command center with former Council Member Bill Spelman, folded into a corner, number-crunching two laptops with two hands), at different locations throughout Austin. "This is a new model for an Austin campaign," said Yznaga. "It's been the best two weeks of campaigning I've ever seen in all my years of doing this." (And those have been many; indeed, Yznaga had supposedly retired from the political game before jumping back in this time around.)

While a string of Travis Co. victories isn't exactly "change," the efforts undoubtedly secured solid margins for such winners as Greg Hamilton, Stephen Yelenosky, and Jan Patterson, along with making a difference for House candidates Mark Strama and (maybe, still) Kelly White. But even the campaign's existence suggests why the Dems are still clearly the majority party in town. "We have 20-year-olds, we have old ladies in Cadillacs with blue hair, we have the United Nations in here," Yznaga said. "This campaign reflects the real city. We have everyone here – except Republicans." – Mike Clark-Madison

'Taking Care of Each Other'

The Election Day cold snap took many a polling-place volunteer by surprise. Among the victims was Louis Malfaro, who took the day off work as head of the AISD teacher's union to hold a sign for District 50 Democrat Mark Strama. Malfaro showed up in a T-shirt at his assigned polling place in a flat, treeless, windy new development in Northeast Austin, and promptly began to turn blue. Fortunately, help soon arrived in the form of a neighborhood voter. "A lady drove by and said, 'You look like you need a sweatshirt,'" Malfaro said. "She drove off and about 10 minutes later came back with a sweatshirt."

The woman then commented that Malfaro could also use some gloves, and made a second trip home to deliver some olive-green granny-knit gloves. It was when she pulled off the final time that Malfaro noticed her Republican bumper sticker. Malfaro was (if you'll pardon the simultaneous use of pun and cliché) doubly warmed. "Hopefully when this day's over, we'll all go back to taking care of each other," said Malfaro. "After all, people are still human beings under all the political labels."

Malfaro was last spotted under a baby-blue Nike sweatshirt, circa 1994, dancing a chilly little jig in the November wind. – Rachel Proctor May

Texas ain't Florida, but concerns over voter fraud and suppression were nevertheless alive and well in the Lone Star State on Tuesday. The Texas version (which, incidentally, dates back to 'round about the Voting Rights Act of 1964) goes like this: Republicans send out poll watchers to keep nonexistent, dead, or noncitizen voters from casting Democratic ballots. Then, Democrats send out their own watchers to watch the Republicans, whose activities (the Dems say) have nothing to do with voters from beyond the grave or the Rio Grande, and everything to do with intimidating minority voters in an effort to suppress turnout.

But if your goal is to protect American democracy from election fraud and voter suppression, Travis County is perhaps not the best place to start. The presidential election was, of course, over in Texas before it even began, and the few local races that were actually competitive didn't have many precincts of the black-and-brown variety that are most often targeted for E-Day hanky-panky. Thus, many of the Austinites concerned about free and fair elections instead headed for Houston, where a large minority community and a long history of Election-Day shenanigans meant Democratic poll watchers would probably have a little more to watch.

Eckstein's group was part of Election Protection, a nationwide project born of the Florida debacle of 2000. Election Protection places law students and lawyers in polling places to answer questions and, if necessary, pose legal challenges to prevent voters from being turned away. About 60 Austin lawyers and law students joined the group's Houston efforts, including Kenavon Carter, a third-year UT law student who got up at 4:45am Tuesday to make the trip. He said the effort was definitely needed.

"It hasn't been as smooth as we had hoped," he said. "In some of the precincts, when the polls opened in the morning, six of the eight voting machines were disabled, so there were huge lines at 6:30 in the morning."

In Travis Co., the Democrats put volunteers in as many precincts as possible, although their goal was not so much to watch for malfeasance as it was simply to answer questions. Before Election Day, County Chair Chris Elliott said the only problem he anticipated was recently registered voters not knowing how to cast a provisional ballot if their names were missing from the rolls, and on Tuesday he confirmed that's pretty much what happened. "Every election you've got a few things that happen, and this year is no different," he said. "We had voters show up at the wrong precinct, or show up not even knowing where to vote, and we helped them figure it out." Elliott made a point of repeatedly lavishing praise on County Clerk Dana DeBeauvoir for proving "very responsive" to the few concerns that arose.

The Travis Co. Republican Party also advertised a need for poll watchers to serve 12-hour shifts on Election Day to "help prevent voter fraud and assure a fair election." However, the party did not return calls for comment on what it was they were watching for, and whether they saw any of it on Tuesday. Hopefully the armies of dead Democrats, worn out from their big night on Sunday, chose to sleep this one out. – Rachel Proctor May

Libs Know How to Party

For presidential hopeful Michael Badnarik and a handful of other national and local Libertarian Party candidates, the race was over before the first vote was counted, and for the most part, they were delighted – attendees at the Legends Sports Bar inside the Northwest Holiday Inn were most certainly in celebratory mode as the spirits flowed and the Tex-Mex buffet just kept coming.

"Eighteen months ago, 50 percent of the people in the country had never even heard of the Libertarian Party. In a poll we did about a week ago, 76 percent of the American population has now heard of the Libertarian Party," said Badnarik, who could be seen intensely crisscrossing the football field-themed bar throughout the night. He was upbeat, festive, and consistently looked the part of the politician. Following a short vacation, Badnarik said, he and his party will regroup and begin preparing for the next election, on whose ballot Badnarik vowed his name would somewhere appear. He also said he would continue teaching his eight-hour Introduction to the Constitution class nationwide.

One alumnus of Badnarik's class on hand election night was Austin blues forefather Jimmie Vaughan. "I found a place I like to be, with people who care about the Constitution and the Bill of Rights; the rest of 'em don't," he said. Vaughan said he was worried about his kids' future and was acting on their behalf to ensure liberty remained intact throughout their lives. "I remember when you could live in a big house in Austin for $75 a month, cheeseburgers cost 75 cents, and people weren't afraid of the cops."

Texas House District 50 candidate Greg Knowles was also present, reveling in his campaign's perceived role in the demise of Republican Jack Stick. "I think Jack Stick was more interested in having a career in politics than actually accomplishing legislation," Knowles said. Stick was targeted by Libertarians, according to state party Chair Patrick Dixon, after he claimed allegiance to many traditional libertarian principles in his 2002 candidacy, then completely abandoned them once in office. Knowles got 2,389 votes, more than four times the margin between Stick and victorious Democrat Mark Strama.

At first glance, one could mistake the Libertarian crowd for an action-movie bad-guy casting call. But on closer examination, most of the partygoers were deeply committed, highly active citizens with a white-knuckled grasp on the liberties and freedoms that, given the newly reelected administration, are increasingly at stake. More fanfare for Libertarians came after the votes were tallied as Dixon confirmed that the party had garnered the votes necessary to secure a place on the 2006 Texas ballot. – Daniel Mottola