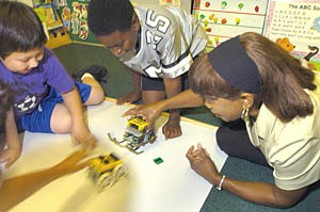 When she was a little girl, Dr. Pauline Walker, a kindergarten teacher at Austin's Maplewood Elementary School, followed her father around the garden, bombarding him with a host of questions – What kind of bug is that? What's it doing? "I was always interested in science," said Walker, a 26-year veteran teacher. "I believe in science and that all children should experience science." And if Walker, her school, parents, and a host of community supporters have it their way, that will happen with the construction of a Solar Science Lab at Maplewood.

For nearly a decade Walker – Miss Dr. Walker to the students – has made it her mission to bring hands-on science education to every child at Maplewood, and to try to boost enrollment of Maplewood students into the science magnet at Kealing Junior High. She started an after-school science club (open to all students), which has become the place to be; it is so popular that it has, literally, outgrown the school. The lab used to be housed in an unused classroom, but had to move as enrollment at the Cherrywood neighborhood campus increased. "I talked to parents after we gave up the lab" in 1998, Walker said, "and they said, 'Why don't you build your own lab?'"

One parent drew up a design for the building – which Walker envisions as a showcase of sustainable building and energy practices – while IBM donated eight computers and 3M donated solar energy kits with which the kids could build their own solar cars, among other things. Walker won a state grant that provided several large solar panels – making Maplewood Austin's first public school powered in part with solar energy – and parents donated a host of rainwater collection barrels. But exactly who will build the lab – and where the nearly $300,000 it will take to complete the project will come from – is still unknown.

Enter Liz Mueller, a Maplewood parent, city planner, and lecturer at UT's School of Architecture, who thinks the Solar Science Lab might be the perfect project for UT's burgeoning Design>Build>Texas program, which aims to give upper-level architecture students real, hands-on building experience. The first DBT project is a "demonstration house" outside Johnson City, an affordable, single-family "model for environmentally-sensitive site and building design." Although the next DBT project hasn't been chosen, program director Louise Harpman said that the Maplewood lab is definitely in the running. "I think it would represent an incredible opportunity for our students," she said.

Meanwhile, Walker and her supporters have a few other funding ideas in the works. They are researching grants and courting benefactors, Mueller and Walker said – including Oprah Winfrey. So far, Maplewood students have written nearly 100 letters to the talk show diva and are producing a video, featuring the science club students, which they plan to send to Winfrey. "It's just a question of, does Oprah's mail really get to Oprah?" Mueller joked. Either way, she said, the Maplewood family is determined to make Walker's dream a reality. "This has all been [Walker's] doing; she's been working for years to get kids more engaged in science. She's really something." For more on the Solar Science Lab, e-mail Dr. Walker at paulinew@swbell.net.