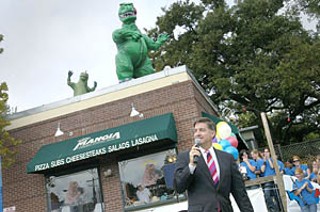 Mayor Will Wynn and Mangiasaurus (Photo By John Anderson)

Like a phoenix rising from the ashes – or more accurately, a giant, bipedal reptile doing so – Monday saw the resurrection of Mangia Pizza mascot Mangiasaurus Rex only a month after his tragic vandalization. In the ceremony at Rex's home at Mangia on Guadalupe, Mayor Will Wynn proclaimed Oct. 25 Mangiasaurus Day, state Rep. Elliott Naishtat gave a brief speech to mark the occasion, and the McCallum High School band performed (perhaps in deference to the fact that the creature was whisked to McCallum by pranksters in 1999).

Rell Rice, director of Mangia corporate sales, theorized that Rex's destruction – leaving the beast shattered in the parking lot one morning – was probably the unintentional result of kids trying to pull another McCallum-style prank. And Rice was quick to mention the assistance the beleaguered beast received: Rex's repair was performed by the Texas Memorial Museum, pros in (real) dinosaur fossil reconstruction. "We were so appreciative of those guys," smiled Rice. "They just called us out of the blue to donate their services," specifically those of director Ed Theriot and artist John Maisano, both present at Monday's ceremony.

Additionally, Mangia neighbor Groovy Lube provided the trailer for hauling the 400-lb. dino, and Duratherm Homes (partially owned by KASE 101 FM's Bama Brown, emcee at Monday's unveiling) loaned the crane used to hoist the handsome fellow back on top of Mangia, where, hopefully, he can grimace undisturbed.