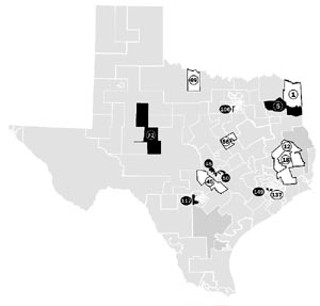 Beyond Central Texas, there are only a couple dozen legislative races that will earn special attention on election night. As is now commonplace, most incumbents have nothing to worry about, and the Republican domination of both Houses, barring a slew of major upsets, looks to be safe.

On the Senate side, the Republicans currently maintain a 19-13 majority, and that is not likely to change. Of the 15 seats on the ballot, only five are contested, and no incumbent appears to be in danger.

On the House side, more seats are in play, although 90 of the 150 are effectively uncontested; of the remainder, perhaps 20 feature real races. The Republicans hope to ride President Bush's coattails – if he has any this time around – to add to their 88-62 House majority; the Dems hope to put a modest dent in that number, which would reverse a steady trend of losses dating back to 1972.

The most high-profile House contest is in District 149, where 11-term veteran and Appropriations Committee Chair Rep. Talmadge Heflin, R-Houston, is being seriously challenged by Hubert Vo, a businessman with deep roots in the Southwest Houston Vietnamese community. In theory, Heflin should be virtually unbeatable, but the district has changed radically over the years (it's now majority-minority), and there has been a backlash against the last Legislature (especially on children's health care). Moreover, Heflin recently lost a lawsuit in which he and his wife at least appeared to be using his political clout to attempt to seize custody of the infant son of their former maid, a Nigerian immigrant. It's not exactly a campaign issue, but it was a major story in Houston, casting Heflin in a mighty embarrassing light. Vo is said to be running a grassroots campaign hard and well, but Heflin will have plenty of money and GOP support – given the added incentive of protecting one of their major players. Recently, they seem to have circled the wagons – Tom DeLay is in town this week to raise money for Heflin. Perhaps that's a mixed blessing.

On the other hand, the Republicans have mounted a stiff challenge against District 137 Rep. Scott Hochberg, when redistricting didn't work in 2002 to unseat the six-term Houston Democrat. Real estate agent Ann Witt is hoping to knock off this major Democratic resource on education issues; Hochberg is still favored, but the district is only narrowly Democratic, so if the GOP spends significant energy it could be a long night.

Another incumbent under siege is freshman Rep. Ken Mercer, R-San Antonio, being challenged in District 117 by attorney David Leibowitz. It's a Democratic district, and Mercer only owes his 2002 victory to the bribery scandal that ended up landing his Dem opponent, former San Antonio councilman Raul Prado, in jail. This time around, Leibowitz is trying to taint Mercer with the TRMPAC scandal – new reports published this week suggest Mercer's 2002 campaign may have violated the law – and last week the San Antonio Express-News endorsed Leibowitz. It may well be his to lose.

Again on the other hand, Rep. John Mabry, D-Waco, represents nominally Republican District 56, and veterinarian Charles "Doc" Anderson was hoping to mount a serious challenge against him, blasting Mabry's key role in the Ardmore Dem exodus. But Anderson too has clumsily run afoul of campaign finance laws – he had to return or reaccount for several major illegal corporate donations – and the Dems are cautiously optimistic about holding that seat.

Other incumbents on the edge could include: District 106 Rep. Ray Allen, R-Grand Prairie, who has been tainted by charges of using his office (he chairs the Corrections committee) to boost his private-prison work; last week, the normally GOP-friendly Dallas Morning News endorsed Dem challenger Katy Hubener, a real estate agent, nonprofit consultant, and environmental activist. And Rep. Scott Campbell, R-San Angelo, shouldn't have been in any danger from newcomer Jeri Slone in District 72. But then Campbell got popped for DUI (not for the first time) and responded by denouncing the DPS troopers (not a smart move); then a charge of indecent exposure earlier this year surfaced from a local masseuse (the spa owner said Campbell appeared drunk that time, too). Campbell may well be in trouble.

Dems said to be under the gun, for more traditional political reasons, include District 69's David Farabee, D-Wichita Falls, facing a strong challenge from local businesswoman Shirley Craft. District 18's Dan Ellis, D-Livingston, long a target of the GOP, is opposed by Dayton CPA John Otto. Both Dems should hang on to their seats, but it may be by the skin of their teeth.

Finally, there are a handful of open seats where incumbents retired, lost in the primary, or chose to run for higher office, successfully or not. Despite losing such estimable characters as Democrats Ron Wilson, Glenn Lewis, Jaime Capelo, and Roberto Gutierrez, and Republicans Wayne Christian, Kenny Marchant, and Arlene Wohlgemuth, most of these seats appear safe on both sides of the aisle. Only District 1, vacated by retiring Rep. Barry Telford, D-DeKalb, appears to be truly in play; Democratic attorney Stephen Frost faces Republican Pete Snow, a businessman and former Texarkana councilman. The GOP would very much like to pick up that seat – but the popular Telford is working hard for Frost, as is former state Dem Chair Molly Beth Malcolm, and that may be just enough borrowed incumbency to carry Frost to victory.