Every Rose has his thorn 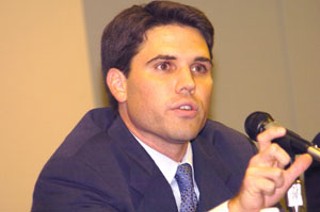 Alan Askew, the Wimberley Republican who is running on a conservative-Christian platform against state Rep. Patrick Rose, D-Dripping Springs, probably never dreamed he'd see his name in a national gay and lesbian publication, but what else did he expect after receiving an endorsement from the anti-gay Rev. Jerry Falwell?

The Advocate made a note of the endorsement in its Oct. 12 online edition, drawing on Falwell's comments published the day before in the Statesman. "This boy's got moral values and Christian leadership on his heart," the Moral Majority leader is quoted saying of Askew when he spoke in Austin. "Pray for him." Whether the power of prayer will carry the day for Askew against the District 45 Democratic incumbent, who has more than half a million campaign dollars in the bank, is one of those known unknowns in a swing district that tends to move in mysterious ways come election time. Two years ago, Rose, then just 23, won by 335 votes in a down-to-the-wire count against Rick Green, an incumbent Republican whose own Christian values came under question following some well-publicized ethical transgressions. The Rose victory was one for the books in this district that covers Hays, Blanco, and Caldwell counties, and the Rose-Green matchup became a case study in Texas politics in the Paul Steckler documentary Last Man Standing. 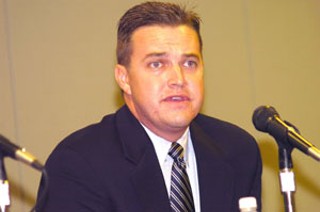 Even as a Democrat trying to win re-election in a GOP-friendly region, it may be that Rose has better standing in District 45 than GOP Reps. Todd Baxter and Jack Stick have in their Austin districts. As Republican consultant Bill Miller said, Rose "recognizes that he's being challenged in a serious way, and he's taking that very seriously." But between Rose, Baxter, and Stick, it's Rose who faces the least threat, Miller added. On this, Miller and Democratic strategist Kelly Fero agree. "Patrick," Fero said, "is blessed with a radical, right-wing extremist as his opponent." Askew, at 29 only four years older than Rose, is a graduate of Falwell's Liberty University in Lynchburg, Va.; his father, Neal Askew, sits on the university's board of trustees.

Rose's weak spot is the fact that trial lawyers are still seething over his vote for tort reform early in the regular session, while most other House Democrats opposed the measure. Trial lawyers supported and contributed to Rose's campaign in 2002, but their enthusiasm for the freshman went out the window as soon as he cast that vote. While some trial lawyers, like state Democratic Party leader Charles Soechting, are willing to write off Rose's action as a rookie error in political judgment, some have gone as far as contributing money to Askew, though he, too, supports tort-reform measures. (Rose, for his part, defends his vote, which he says reflects the sentiment of his district.)

But even with that, Askew has been no match for Rose when it comes to the ability to fundraise large sums of cash. Askew's family has provided a total of $270,000 to his campaign coffers through September, and his last filing with the Ethics Commission shows he has $56,842 in the bank. Rose has almost 10 times that much – $566,478 in available cash, according to his campaign reports. The two sides point fingers where money-in-politics is concerned. Askew suggests Rose is forming allegiances with the more generous and influential lobbyists. Rose's campaign predicts Askew's family financial sources will pony up additional cash between now and Election Day, and says Askew expects to buy his votes instead of earning them the old-fashioned way, by knocking on thousands of doors and showing up at candidates debates. Askew skipped three fairly significant debates in the district during the month of September, including one sponsored by a homebuilders' association – even though Askew himself is a homebuilder who also manages his family's ranch in Blanco.

Still, Askew has drawn money and vocal support from Republican leaders and party activists, and Agriculture Commissioner Susan Combs sang his praises at his campaign kickoff event. He has been endorsed by far-right organizations like Texas Eagle Forum and the Texas Alliance for Life, and has further rallied right-wing support to his corner by drawing attention to Rose's vote against the Women's Right to Know Act, a coup of the House's right-wing faction that effectively weakened a woman's right to choose. The law calls for women to undergo a waiting period before an abortion, during which time they are supposed to peruse graphic anti-abortion materials that physicians and health centers are required to provide.

But Rose has backing in traditionally conservative corners as well, including the Texas Farm Bureau, the Combined Law Enforcement Associations of Texas, and the big clincher for every Central Texas native running for office – the National Rifle Association.