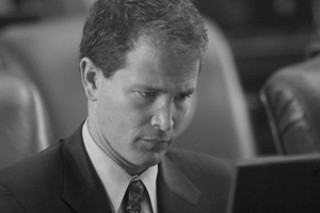 It's midmorning on a Friday, and Mark Strama, wearing faded jeans, a pullover shirt, and tennis shoes, is talking about the powerful role that young people can play in the electoral process. His audience is a government class at Austin Community College's Northridge campus, and Strama is recalling his days with the national Rock the Vote drive to register new voters before the 1996 presidential election.

"We registered a million people that year," he said, casting his gaze evenly across the room. Then he laughed. "But most of them didn't vote!" His point here was that global events and a polarized America have effectively turned apathy upside down, giving first-time voters a reason to go to the polls.

As a guest speaker with an assigned topic, Strama avoids the usual spiel he pitches when he's in uniform and his hair is perfectly coiffed. But it's still clear that Strama, who at 37 doesn't look much older than the students, is a political candidate – running for the House seat that represents northern Travis Co., including the Northridge campus.

"Who's your opponent?" one young man near the front of the class wanted to know. "My opponent is a guy named Jack Stick," Strama said. He paused a beat. "He hasn't done Jack Stick." The students tittered.

For an incumbent with high political aspirations, Stick has not had the best campaign season, beginning with the spring primary where he drew not one but two challengers from his own party. He emerged the clear winner, but it cost him more than $136,000. Since then, he's had to work hard – probably harder than he anticipated – to fend off charges from the Strama camp, and indeed, detractors of all stripes. That Stick is trying to juggle a campaign with two other monumental events in his life – a wedding and a new home – makes him all the more vulnerable. Even Stick's critics feel his pain, when they're not relishing the prospect of replacing him.

Stick recently cleared one of his three objectives. On Oct. 16, he married Erica Phillips, a political consultant and former aide to ex-state Rep. Arlene Wohlgemuth, who is in a tight race against U.S. Rep. Chet Edwards, a Democratic target of Tom DeLay's redistricting plan. With the wedding out of the way, Stick is now down to two challenges: overseeing a home-building project and fending off a formidable political foe.

Moreover, Strama is rivaling Stick's fundraising performance as he's tapped a broad network of political, business, and family connections to help fuel his first run for office. While the most recent campaign filings show that Stick outraised Strama between July 1 and Sept. 23 ($144,400 to $122,283), Strama boasts a fatter bank balance – over $241,000. Strama's tech-industry background has given him an edge in meeting fundraising goals through online contributions. (His former company, NewVoter.com, launched the software that registered over 700,000 voters in the 2000 elections.) As of two weeks ago, Strama said, he had raised $70,000 online, which is roughly the difference between the two opponents' war chests.

A Houston native, Strama's ties to the Capitol date back to his work on Ann Richards' 1990 gubernatorial campaign, then to state Sen. Rodney Ellis' office, where he served as the Houston Democrat's chief of staff. Strama cites his ability to work and play well with others with opposing viewpoints – a lesson he learned after finding himself on the other side of the table from his own mother, Brenda Strama, an attorney with Vinson & Elkins, in a tussle over a piece of health-care legislation coming out of Ellis' office. The two sides reached a compromise.

In campaign debates, Stick seldom fails to mention that, while he was working on important bills during the 2003 regular session, Strama was living in, of all places, Washington, D.C.! Stick warns voters that his opponent "will take his money and his advice from Washington, D.C." if elected to office. (Strama says he rented an apartment there because his hotel bills were starting to mount from frequent business trips to Washington.)

Democratic strategists believe that District 50 has good swing potential for the party, and they say polling shows that many residents are unhappy with Stick's first term. One group of dissatisfied constituents lives in Canyon Creek, a neighborhood off RR 620, at the western edge of the district, that Stick carried in 2002 with 80% of the vote. Don Zimmerman, a Canyon Creek Republican who led opposition to last spring's successful hospital district initiative, says Stick "shafted" taxpayers on one of his key promises to the community: to pass legislation that would relieve them of their tax obligation to the Canyon Creek Municipal Utility District.

Stick did file a bill – HB 1680 – which would have required the city of Austin, which annexed the community more than 10 years ago, to either assume the MUD debt or let Canyon Creek residents vote on de-annexation. But residents say his heart just wasn't in the effort, and the bill died after the House Committee on Land and Resource Management tabled it. Stick's "betrayal," said Zimmerman, is further demonstrated in a letter the freshman wrote to a committee member, thanking the member for recognizing the legislation as an "important re-election bill for me," and ending with a handwritten postscript: "Guess something's in the water out there."

Needless to say, Canyon Creek homeowners are still fired up. Stick recently sent a letter to them, explaining that a "block [sic] of liberal democrats" on the committee had killed the legislation. In fact, the committee's Republicans outnumber Democrats 5-4, but Stick says he was actually attributing the defeat of the bill to the Democrats' trip to Ardmore during the redistricting fiasco. "I had the votes to get it out of committee," he said. "It's just unfortunate this bill was caught up in [the mass walkout]." He added that he intends to re-introduce the bill in the next session.

Stick also managed to anger his conservative Christian base in Pflugerville by supporting Gov. Rick Perry's plan to solve the school finance problem with, among other things, slot machines at racetracks. (The gambling component of the plan was killed even before Perry's overall plan to resolve the education crisis failed.) At the time, a horse-racing concern, the Austin Jockey Club, had set in motion its plans for a 200-acre racetrack east of downtown Pflugerville, at the future crossroads of SH 130 and SH 45. The Jockey Club – which already holds a state Racing Commission license (dating back to its first, failed plans for a track in Montopolis) – would have been able to install "video lottery terminals" at its new track. But many of Pflugerville's ministers strongly opposed the idea of casino gambling in their community, as did other churchgoing citizens.

Three weeks ago, Stick agreed to discuss the gambling issue in a private meeting with a group of Pflugerville pastors. The ministers also invited Suzii Paynter, director of public policy for the Texas Baptist Christian Life Commission, to attend the meeting to provide the necessary facts and figures on the financial, social, and moral ills of gambling. Paynter's group had lobbied vigorously against the bill. The meeting concluded on an unhappy note, without resolution. Stick "said he had felt pressured to take a pro-gambling stance," Paynter recalled of the meeting, "even though there were 25 other Republicans who had stood up to that pressure." The general assumption was that Stick feared losing a seat on the powerful Appropriations Committee, Paynter said. "Our goal was to talk about the impact [of gambling] on the most vulnerable people of that community," Paynter added, "but his overall attitude was that he was not interested in standing up against a predatory venture." Stick has a different recollection of the meeting. "What I said was that there was tremendous political pressure to fix the school finance issue and to reduce property taxes," he said. Paynter "has a perception of what I said, but I didn't feel any pressure [to cast a pro-gambling vote]."

Stories like these are not lost on the Strama campaign, but it's uncertain whether the Democrat will be able to siphon conservative votes from Stick's unhappy constituents. In the end, Stick believes, his overall anti-tax, pro-life voting record (pro-gambling not withstanding) will ultimately carry the day.