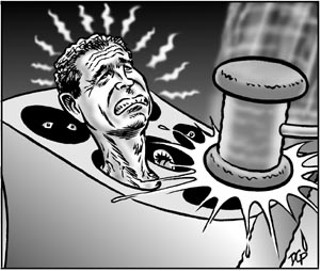 The way things are shaking out in the state House races, you'd think that Travis Co. voters were carrying the entire weight of Texas on their shoulders. That's to be expected when your back yard is home to two of the most carefully watched battleground districts in the state. Here is where Republicans are trying to hold on to what they seized in 2002, while Democrats see a chance to recapture the two House seats. In District 48, which runs from West Austin to the northwest fringes of the county, voters will decide whether to keep Rep. Todd Baxter or replace him with Democratic challenger Kelly White. And District 50 voters in north and northeast Travis Co. have a choice between Rep. Jack Stick and Democrat Mark Strama.

Baxter and Stick hold some protective rank as incumbents, but their freshmen status provides little guarantee of a second term. "If you win once, you're in good shape, and if you win twice you're in great shape," said Bill Miller, a lobbyist who helped facilitate Republican House Speaker Tom Craddick's transition to power in the last session. "So if you're going to take somebody out," Miller went on to say, "you better try and do it in their first term." Still, Miller remains bullishly optimistic that Baxter and Stick will survive their challenges, no matter how costly or brutal.

But the rookie reps carry some damning political baggage: What did they know, and when did they know it? Baxter and Stick were both beneficiaries of 2002 campaign contributions now at the heart of a criminal probe into Texans for a Republican Majority, the political action committee formed by U.S. House Majority Leader Tom DeLay. Three TRMPAC foot soldiers face indictments alleging they laundered illegal corporate cash to stoke the campaigns of seven House candidates, including Baxter and Stick. The money, combined with incendiary campaign mailers crafted by the Texas Association of Business, helped Baxter unseat Democratic Rep. Ann Kitchen, and Stick beat Democratic candidate James Sylvester. (TAB is also under investigation for its use of corporate money to bankroll the mass advertising.)

Kelly Fero, a Democratic strategist for Take Back Texas, a group working toward a Democratic recapture of state politics, believes Baxter and Stick "mortally wounded" themselves when they accepted the contributions ($35,000 to Baxter and more than $46,000 to Stick). The two are not accused of wrongdoing, but White and Strama have called on the incumbents to return the contributions or direct the money to a charity.

The freshmen's responses have been embarrassingly weak. At one forum, Baxter suggested that White had surreptitious motives for omitting the occupations of her contributors in her first campaign finance filings with the Ethics Commission. But Baxter neglected to inform the same audience that, just six months earlier, he had faced a possible $10,000 penalty from the Ethics Commission for failing to report a $5,000 TRMPAC contribution during his 2002 election campaign. Baxter filed a corrected finance report nearly one year later, and his penalty was ultimately reduced to $300, according to minutes from the commission's May 7 meeting.

Stick's turn-the-table response to TRMPAC charges is to question Strama's campaign ties to a musician with an arrest record. "I find it remarkable that Mark is willing to accept money from a fellow who admittedly had sex with a teenage prostitute and admitted to years and years of drug use," Stick said. He was referring to former Eagles lead singer Don Henley, who in 1980 was arrested at his home on suspicion of giving cocaine to a minor, according to news reports at the time, which also noted that police booked a 16-year-old girl on a prostitution charge and a 15-year-old girl for illegal drug use.

In any case, the questionable TRMPAC contributions lead into another popular theory: that Baxter and Stick returned the favor by supporting Tom DeLay's explosive redistricting directive that split Travis Co. three ways to help the Hammer build up his GOP majority in Congress. And that re-redistricting fight remains bitterly controversial.

Will the TRMPAC and redistricting upheavals help White and Strama? As one would expect, Miller says no. "I don't think that will hurt them any more than going to Ardmore will hurt Patrick [Rose]," he said of the District 45 representative who joined the Democratic walkout to thwart redistricting efforts [see p.36]. And as one could also expect, Fero, speaking for the Democrats, believes the TRMPAC/redistricting mess has already damaged the incumbents – particularly in light of their support of a GOP budget that removed 150,000 youngsters from the Children's Health Insurance Program, and the overall failure of Republicans to deal with the school finance crisis.