The Tom DeLay Watch is getting more entertaining by the moment. Last week featured another letter of "admonition" for the Bug Man from the House ethics committee, following close behind an earlier one in response to his strong-arming the Medicare vote last November. This time he was whacked on the wrist for: 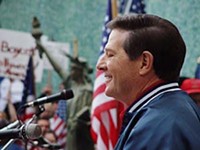 Naked City
A Bug Man and His Lawyers