Listen to the Candidates Debate ... 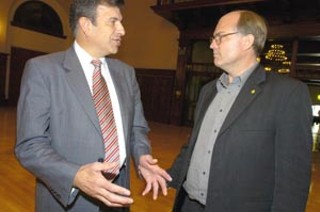 A remarkable thing happened on the UT campus last Thursday. Two candidates for president of the United States met for a debate, and not once did either of them mince their words or dodge questions in fear of losing votes. Both spoke openly and honestly, letting their beliefs, rather than opinion polls, choose their words. Neither tried to distort his opponent's record, or his own. And neither has a chance in hell of winning.

Michael Badnarik of the Libertarian Party and David Cobb of the Green Party squared off in the Texas Union Ballroom, actually agreeing more often than not, especially on the flaws of an American electoral system that makes the success of "third parties" nearly impossible. "We labor under a voting system that is so undemocratic that folks normally feel like they have to vote against what they hate between two establishment corporate parties rather than for what they really want. Folks, the two-party system is failing," said Cobb, a San Francisco lawyer who originally hails from San Leon, Texas. "We're calling for systemic change [and] systemic social change in this country has always required the vision and courage of alternative parties."

Badnarik is also a Texan: "I used to live in Austin," he joked, "and I hope to again after the election." He also called on the approximately 200 people in attendance – most of whom, of course, were likely already among the converted – to leave the Democrats and Republicans behind: "The only wasted vote is when you vote for someone you do not respect."

But like Bush and Kerry, the two had their lines well rehearsed, especially Badnarik. His criticism of U.S. foreign policy drew laughs from Greens and Libertarians alike: "Any time you have a hornets' nest on your property, there is a small but finite chance you could be stung by a hornet. If you take a baseball bat and go down to that hornets' nest and start beating on it in an effort to kill hornets, your chances of being stung are going to increase, not decrease. What we are doing in Iraq is increasing the threat of terrorism." Badnarik called for withdrawing not only from Iraq, but also from many other countries where we currently have troops: "World War II has been over with for over 50 years; it's time we had an exit strategy for Germany, Japan, and Korea."

Cobb agreed. "The Greens knew that [the Iraq invasion] was a bad idea two years ago," Cobb said. "I have no idea why Bush and Kerry thought it was a good idea, and I'm flabbergasted that on the face of such overwhelming evidence of the need to withdraw U.S. troops that both George Bush and John Kerry continue to pursue this reckless adventure." Cobb said if elected president, he would immediately issue a public acknowledgement of the illegality of the war and an apology to Iraq's people, and seek to replace U.S. forces with U.N. troops mainly from the Islamic and Arabic-speaking world.

On other issues, the two partially agreed on immigration, but sparred on gun control and health care. Cobb said that illegal immigrants leave their homes because "'Home' is so incredibly desperate. The desperation is actually being driven by the International Monetary Fund, the World Bank, NAFTA – probably the single worst bit of trade legislation that this country has ever seen – and the World Trade Organization." Cobb said repealing NAFTA and reducing participation in the WTO would reduce immigration.

Badnarik acknowledged the important role illegal immigrants play in our economy, and as expected put an anti-big government spin on it: "The reason that most of them are illegal immigrants is simply by virtue of the fact that it is much easier to swim the Rio Grande than to climb the mountain of paperwork required in order to be a legal immigrant." Once here, though, Badnarik said immigrants should sink or swim and not look for government welfare.

On guns, Badnarik insisted that he shouldn't need a permit for a gun any more than a permit to attend church. "If I have a right to keep and bear arms, I do not require a government-issued concealed-carry permit." Cobb – himself a gun owner – drew a distinction on this point between Greens and Libertarians. "I'm a member of a community ... responsible gun safety laws are part of that. You need a license to catch a fish, you need a license to drive a car; appropriate gun safety laws are appropriate for the safety of the United States of America and its citizens."

Health care, Cobb said, "should be a compact we all share with each other. And we [the Greens] want to start treating health care not as a constitutional right but as a genuine human right. That is, single payer, universal health care. If you are sick, you should get treatment. Period. It's interesting because the rest of the industrialized world follows this model, and they have much lower health care costs." "You do not have a right to health care," countered Badnarik. "The government's going to come in, take a hundred dollars out of my wallet, they're going to keep $50 for overhead, and they're going to give your doctor the other $50. Isn't that a little bit inefficient?"

From Austin, the pair continued working together against their common foe – they went up to St. Louis for that other presidential debate the next night, and both were arrested for trying to force their way into the Bush-Kerry matchup.