Austinites who haven't heard of Samantha Smoot have probably heard of the group she leads, the Texas Freedom Network. It's a statewide organization with 19,000 members that describes itself as a "mainstream" alternative to the religious right, and does its Cain-raising when conservatives want to put God in biology textbooks or private-school vouchers into the public school system. Now, after six years as executive director of TFN, Smoot has announced she's moving on at the end of the year. As the progressive (er, mainstream) activist scene loses a prominent figure, a look back on her tenure illustrates both the progress and challenges facing those who fight the right.

Politics is never pretty, but during the 1990s the Texas political scene evolved from something akin to two soccer teams meeting on a field to something more resembling the teams' fans meeting in the parking lot after a few too many pints. One of the major forces contributing to the new climate was change within the Texas Republican Party itself. Stated simply, it moved right. Waaaay right. Right over to a place where the thumping of Bibles and the fluttering of flags, the weeping over fetuses and the wailing over sodomy, drowned out the moderate and pro-choice voices that long had a home amidst the pachyderms.

Cecile Richards launched Texas Freedom Network in 1995 to respond to this change. Under Richards, the group focused mainly on education, such as opposing vouchers and fighting efforts by the State Board of Education to ensure that textbooks reflect a conservative world-view. However, Richards credits Smoot, who took over in 1998, with broadening the agenda to include issues such as hate crimes and gay rights.

"It really was unbelievably good fortune for the organization and the issues the TFN works on that Sam was willing to devote almost seven years of her life to building the organization," she said. "I feel I just did the spade work to get started, and it was Sam who brought it into being the statewide force that it is."

Originally from Texas, Smoot spent most of the Nineties bouncing around the country serving short-term posts on political campaigns (mostly, but not entirely, for Democrats), interspersed with longer gigs at nonprofits like the National Abortion and Reproductive Rights Action League and Emily's List, which works for pro-choice Democratic women candidates. In fact, she says she never had any intention to stay at TFN long. "I'm an itinerant campaign worker at heart," Smoot said. "This is more than twice as long as I've been at any job."

Fighting one battle after another on the front lines of the culture wars, it can be hard to find a good time to drop the spear. First, there were the annual textbook battles at the SBOE. This year, the TFN is one of 60 groups working in coalition to get publishers to include mention of condoms in health textbook discussions of sexually transmitted disease prevention – conservatives want (and the books currently up for adoption in November have) an abstinence-only message.

Where the Chips Fall

And there's always something to do at the Lege. In recent years, the TFN supported greater oversight of charter schools and fought homophobic bills, such as one prohibiting adoption or foster care by gay couples. Austin Rep. Elliott Naishtat, who chaired the House Human Services Committee in the 2001 session, remembers the TFN leading opposition to reauthorization of an alternative accreditation agency for faith-based child care and residential treatment organizations. That agency had enabled the Baptist-run Roloff Homes to operate in Texas, despite a history of child abuse. "Thanks to Sam Smoot's dogged intervention, this bill never made it out of the Human Services Committee, and there are no longer any Roloff facilities licensed in Texas," Naishtat said.

Despite such successes, Smoot believes the TFN needs to stop "playing defense" and actually begin defining the terms of political debate. In doing so, the group can learn from progressives' past victories, such as the mid-Nineties voucher battles that Smoot credits with building broad suspicion of vouchers among Texans. But they can also learn from the successes of the far right. "For instance, on abortion rights you can clearly see how they are just chipping away, chipping away, chipping away – trying to pick up ground on public opinion about abortion itself by focusing on late-term abortions," she said.

Smoot believes a key element for influencing opinion is the Texas Faith Network, a coalition of about 500 progressive clergy that has been part of the organization since 1996. "It is easy sometimes for people to perceive 'religious vs. anti-religious' in a dialogue surrounding an issue like school prayer," she said. "So, the only way for us to really demonstrate that that's not the case is for us to let a religious leader, someone who has that mantle of morality and credibility, and the spiritual language, to articulate that different point of view."

Another element, Smoot says, will be to continue to work in coalitions – both with unlikely partners like the Eagle Forum, a conservative group that opposes vouchers, as well as progressives like Planned Parenthood and the ACLU, among whom cooperation is enhanced, ironically, by Texas' political climate. "Texas is such a repressive state that it's allowed progressives to coalesce and get over the petty turf battles and ego and minor differences," said Texas ACLU head Will Harrell. "For example, we've been able to focus much more on criminal justice reform and other issues, knowing the TFN was there holding the line on church-and-state issues."

But holding that line can be draining. Smoot refers to the Capitol as a "war zone," and people on both sides of the fence agree that getting involved invariably means taking some punches. "The hearings do get tense, usually because a legislator will try to shoot the messenger instead of the message," said MerryLynn Gerstenschlager of the Eagle Forum. For example, the Republican chair of the House Public Education Committee, Kent Grusendorf, frequently needled Smoot during her testimonies. In a March hearing over a pilot voucher program, for example, he repeatedly interrupted her, accusing her of a "lack of credibility" and making patronizing comments like "Sometimes you paint with a real broad brush, Samantha." But taking the knocks, colleagues say, is something Smoot does well.

"She's gone up against some amazing foes and never lost her composure, or her ability to speak eloquently on behalf of people who don't want the religious right to take over," said Susan Wills, who directs Austin Area Interreligious Ministries.

It's a quality that has earned her the respect of even some of those who disagree with her. "She's a very, very capable opponent," said Gerstenschlager of the Eagle Forum. "God has blessed her with intelligence, and she has many talents. I truly wish her all the best."

An extended conversation with Samantha Smoot is presented as a sidebar to this story. 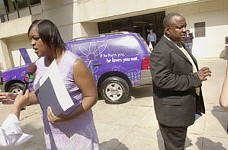