Seven glorious years later, and did we learn anything? 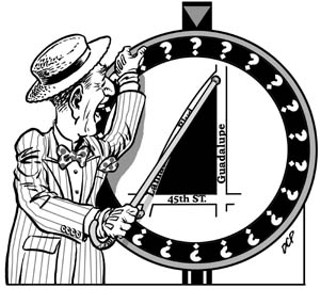 It took a while, but I guess you can say the neighbors finally won: As of Tuesday, there will finally, officially, for real, not be a 60,000-square-foot grocery store at the Triangle. Both the City Council and the state's ad hoc special board of review – which under state law gets final say on land-use decisions involving state-owned land – have okayed amendments to the plan for the mixed-use complex between 45th, Guadalupe, and Lamar, eliminating what was, seven years ago, the Randalls superstore that formed the whole project's raison d'etre. And there was much rejoicing.

Randalls itself has been out of the Triangle project for a while now, and even before this week's coups de grace, what is currently being built at the North Central Austin crossroads bears scant resemblance to the "urban strip-mall plus" that spawned the grandest outbreak of local political drama in the (post-SOS, pre-toll roads) boomtown era. Along the way, formerly obtuse developers and state officials have become rabid New Urbanists, marquee urban-design mavens like Peter Calthorpe have colonized Central Texas, and the progressive-planning bug has spread from its Hyde Park incubators all the way across the region. People in Leander, for God's sake, are planning mixed-use projects that are more theoretically "progressive" than anything proposed for the Triangle back in 1997. And there was much rejoicing.

And yet, and yet. Look at that big ugly suburban apartment building, with its enormous parking garage, a mile or so south on Guadalupe. Look at the Home Depot, and soon the Wal-Mart, nibbling at the edges of Travis Heights. And look at the Walgreens, also approved last week, at South Lamar and Bluebonnet Lane. Certainly, all those projects, and others of their ilk, have been modified, or at least tarted up, in ways that (arguably) help them fit a little better into neighborhoods in the heart of (apropos of Beverly Griffith) one of the world's great cities. But whatever consensus was forged in the crucible of the Triangle, it clearly wasn't a general understanding that infill development in Austin be genuinely urban and not just tweaked-out versions of suburban models, like the original vision for Triangle Square. If that wasn't the takeaway message from the Triangle, then what was? What have we learned?

I suppose we've learned, or at least Triangle developer Tom Terkel has learned, that building something in Central Austin can be a real bitch, but I'm not sure that qualifies as new information. The neighborhoods, though, have learned something similar, which might be a genuine lesson. The Triangle saga erupted at the dawn of Austin's embrace of neighborhood planning (after the defining work of the Citizens Planning Committee, but before the city initiated its first pilot plans).

Back then, it was easy to believe that citizen-driven planning would eliminate derailments like that seen at the Triangle. Select neighborhood reps negotiated with Terkel for 10 months on improvements to the project, only to be overwhelmed by the backlash from their own constituents, who found the very concept of Triangle Square – or, indeed, any development on what they conceived as public green space – abhorrent, and any response other than strict opposition inadequate. Tactically, the neighbors, as opposed to their leaders, were probably right; the real transformation of the Triangle into a genuinely mixed-use urban development began only after its original concept had been vilified for months on end by thousands of people.

But a whole City Council got elected, in part, on the premise that there had to be an easier way, and that real citizen planning would get us there – if not on the Triangle (due to the complicating factor of state ownership), then elsewhere. It has not. It has certainly improved things, and one can tell the difference between contentious cases within planned neighborhoods and those outside the planning orbit. But would an adopted plan have really prevented nearly 200 people from trooping down to City Council this summer to buck the surrounding neighborhoods and talk about how much they like Maria Corbalan's tacos? And even where plans have been adopted, this summer I've seen four cases where, more or less openly if not always with outrage, neighbors have suggested they were sold out by their adopted neighborhood plans and the leaders who crafted them.

As a planning team chair myself, of course I think the effort has been valuable. But as our president might say, it's hard work. Really hard work. It isn't any easier now for citizens to drive land-use decisions in Austin than it was in 1997.

Site and Scale and Substance

Another thing we've learned is that tenants really do matter. Intrinsically, for the people really paying attention, the battle over Triangle Square was being fought against a developer and over a site plan. But politically – and, for most of the central-city rebels of 1997, completely – it was being fought against a Randalls, and initially an Act III theatre and a Barnes & Noble as well. I remember Terkel suggesting at his big, wild, town-hall meeting at MHMR that his project wasn't that different from the shopping center containing Central Market. "But it is different!" the woman sitting nearest to me screamed. "We like Central Market!"

There you go. We like Central Market, and we like Maria's Taco Xpress. We didn't like Randalls, and we're pretty cool on Walgreens and Home Depot and Borders, and we abhor Wal-Mart and Lowe's, and so on. We forget that, 10 years ago, North Central neighbors fought, and failed, to stop Central Market, though not as uncompromisingly as they fought the Triangle. We still have a lot of dissonance, as a body politic, over whether our land-use decisions should properly apply to the dirt, rather than the future occupants of that dirt. But we no longer view it as heresy to suggest the latter course. Even Queen Betty Baker, a committed partisan on the we're-zoning-dirt side, is now willing to contemplate that maybe Wal-Mart is different from other stores. (Baker, it should be noted, walked out, in protest and with great display, when the Planning Commission, which she then chaired, first considered the Triangle. But it wasn't because she didn't like Randalls.)

So today, we might be standing on the verge of a new planning paradigm, where criteria that really are tenant-specific can and must drive land-use decisions – from design standards banning "branded architecture," to size caps on big-box stores, to requirements that mixed-use projects really be mixed use, to living wages and low-income job creation and housing affordability. (The sort of stuff now being advocated by, among others, Liveable City and its sibling/offshoot Full Circle, hence the name of our sermon for today.) While such issues are part of more finely grained master plans like those for Mueller or (embryonically) the Saltillo District, none of those community values are currently captured in the city's off-the-shelf Land Development Code, or by extension, in the neighborhood plans that manipulate it. But they all matter. They mattered enough back in 1997 to completely change the shape of the Triangle. They still matter enough to change the rest of Central Austin as well.

Austin at Large: Police and Thieves in the Street
Why do people say “ACAB”? Allow Austin’s warrior-cop lobby to demonstrate.

Austin at Large: A Pre-November Pep Talk
Reasons for optimism as we ride this circus train into Election Station