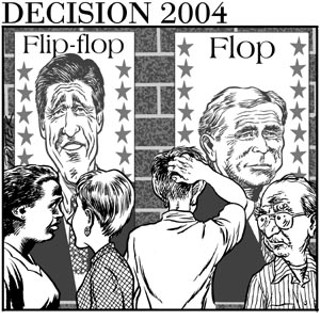 Quote of the Week: "The re-election of George W. Bush would be a mandate to continue on our present course of chaos." – W. Leon Smith, the editor of the Lone Star Iconoclast in Crawford (!), in endorsing John Kerry. See p.20 for all the latest election news.

AISD isn't so bad, says the state. But it isn't so great either, say the feds, as parents wade through the week's accountability data dump. See p.22.

Meanwhile, the University of Texas says it needs to be (yawn) more like the private sector if it wants to keep up its first-class pretensions. See p.26

The City Council won't be wrangling with Rainey Street this week after all. Who'da thunk it? See p.25.

The community-activist response (or, more properly, a do-over) of the city's controversial big-box retail study was released this week as we went to press. More details next time.

There's still music on Channel 15, as the City Council last week approved plans to transfer what was once the Austin Music Network to a private for-profit venture, Austin Music Partners, led by broadcasting veteran Connie Wodlinger. Meanwhile, as Wodlinger seeks additional investors and readies to go live next year with AMP's "Austin Music and Arts Channel," the city finalized plans for Austin Community Television to maintain AMN programming on Channel 15 in the interim. Current plans are for the AMN brand name and its general manager, Louis Meyers, to be fully absorbed into ACTV after Channel 15 goes to AMP – a prospect distasteful to vocal ACTV producers, who complain that the access network's adoption of the semicommercial AMN format violates its mission and bylaws. The producers were shot down in court last week in their effort to depose current and former ACTV board members and staff; no word yet on whether they intend to proceed with threatened legal action. – M.C.M.

State Sens. Rodney Ellis and John Whitmire, both D-Houston, and Houston Police Chief Harold Hurtt have all called for a moratorium on executions of Harris Co. death row inmates until the HPD can review nearly 8,000 cases made with evidence handled by the beleaguered HPD crime lab. Eight of the 11 inmates scheduled for execution this year are from Harris Co. "I think it would be very prudent for us as a system, a criminal justice system, to delay further executions until we've had an opportunity to re-examine evidence that played a particular role in the conviction of an individual that was sentenced to death," Hurtt told the Houston Chronicle. – J.S.

California Gov. Arnold Schwarzenegger has signed into law a bill requiring a voter-verifiable paper trail on all electronic voting systems by the 2006 primary. The law will not affect the November 2004 election. This is big news for Austin's Hart InterCivic, a leading producer of electronic voting systems with a major contract in Orange County. "We anticipated that the bill would be signed and have always planned to meet the new requirements," said a Hart InterCivic spokeswoman. "We have had a voter verifiable paper audit trail product in development for quite a while and have been working with current and prospective customers, including Orange County, on the final specifications before we bring it to market." – L.N.

The Bush administration's horrid environmental record is being challenged in court by the Seattle-based nonprofit Earthjustice, which filed suit against several federal agencies on Sept. 23, claiming that a new Environmental Protection Agency "rule" aimed at streamlining the pesticide approval process endangers fish and other wildlife. Under the new regulation that took effect last month, the EPA unilaterally approves pesticide use without first consulting with the federal Fish and Wildlife Service or the National Marine Fisheries Service. "By eliminating the checks and balances built into the [Endangered Species Act] through formal agency consultation, the new rule makes it easier for agribusiness and other industries to use highly toxic pesticides," reads an Earthjustice press release. For more info, see www.earthjustice.org. – J.S.

Communities in Schools will hold its "Food for Thought" fundraiser Thursday, Oct. 7, at the Omni Hotel Downtown, 6-9pm. The event includes an auction, a samba band, and a sampling of dishes from Austin's swankiest restaurants. Tickets cost $50, which goes toward the group's dropout-prevention activities in AISD schools.

The Austin Parks Foundation is hosting volunteer park workdays around town on the next two Saturdays, Oct. 9 and 16 – they'll be performing much-needed maintenance and groundskeeping work at Norwood Estates, Brentwood, Wooten, and Bull Creek parks. See www.austinparks.org/volunteer.html for more info.

Happy Indigenous Peoples Day: In honor of 512 years of resistance to colonialism in North America, MonkeyWrench Books (110 E. North Loop) will screen Incident at Oglala, a film about the 1975 standoff between American Indian Movement activists and the FBI. Monday, Oct. 11, at 7pm, free. For more info, call 407-MWBK.

The activist group Raising Awareness of People Trafficking will show Dying to Leave: Slaves of the Free Market, a 2003 PBS documentary exploring the current worldwide boom in illicit human smuggling and human trafficking, at 7pm Monday, Oct. 11, on the UT Campus, Mezes Hall, room 306. Following the film, there will be a Q&A session about human trafficking with UT sociology professor Penny Green; for more info, e-mail utrapt@yahoo.com.