Another Slowdown on Rainey Street

Staff redevelopment plan hits a roadblock at the Design Commission At what was supposed to be its last stop before hitting the City Council dais, the long-discussed effort to rezone and redevelop the Rainey Street neighborhood once again got stuck in traffic. The city's Design Commission took its crack at reviewing the current city staff proposal to bring actual Downtown zoning and density to the historic Downtown neighborhood – and concluded that much work and further study is still needed.

Many of the longtime and elderly homeowners in and near Rainey Street, led for years in their quest for redevelopment by Roy's Taxi scion Bobby Velasquez, have argued that the city has not just studied Rainey but studied it to death. The state and fate of the neighborhood – a traditionally low-income, largely Latino enclave in the shadow of the Convention Center and Downtown high-rises, protected since the mid-1980s as a National Register historic district – has been a civic issue in Austin for decades, and ever since the Convention Center opened in 1992, most Rainey neighbors have been united in wanting to sell out, move out, and move on with their lives. The current proposal was set in motion by the city Downtown Commission last December, given the City Council go-ahead in February, and crafted by the city's planning staff throughout the summer; the Rainey recommendations have wound their way through seven city boards and commissions on their way back to City Council this month.

Each of those commissions has seen Rainey Street through its own frame of reference. The pivotal question is, and has always been, how to combine Downtown density and historic preservation – within the constraints imposed by the National Register listing – but commissions have been cautious not to extend their reach. The Parks Board took a position only on park fees. The Downtown Commission pushed to bump up the density allowed under the proposal. And the Historic Landmark Commission threw down the gauntlet on preserving the historic district and, if that proved impossible, supported keeping the staff plan's proposed "enclave" – to which select old houses would be relocated – as close to Rainey Street as possible.

But the Design Commission took a much more extensive look at the nuts-and-bolts of the plan. Most of the panel's members are architects or planners who have subcontracted on city projects before, so its hearing was a bit like a final exam for city staff. And the best the commission could offer was an "incomplete."

City planner George Adams and his team have sketched out some general design guidelines for Rainey Street: a 10-foot setback along all streets to accommodate Great Streets sidewalk improvements; pedestrian-oriented uses along Cesar Chavez, Rainey Street, River Street, and Waller Creek; a 30-foot setback from the top of the bank of Waller Creek; and a 45-foot maximum height for building massing along River Street.

But commissioners had a tough time reconciling the noble goals of the council – preservation of existing trees and historic houses, mixed-use development, the pedestrian-friendly environment – with the kind of high-density new construction that appears to be necessary to make Rainey Street economically viable for redevelopment.

"Staff is trying to respond to that difficult position," said Commissioner Girard Kinney, who was grappling with just how the Design Commission could endorse a plan whose goals might never become a reality. "We have compromised on a lot of things that we feel are important. They actually make it harder to achieve the development goals that we think should happen in this neighborhood."

For instance, the city recommends that the new Rainey Street should comply with its pedestrian-oriented Great Streets standards. But combining Great Streets and on-street parking is almost impossible on the neighborhood's narrow streets. Several architects on the commission held that the only reasonable solution is shared regional (and likely structured) parking, which is not in the recommendations at all and has never been contemplated by city staff.

Even more worrisome to the commission is the carte blanche that full-on Central Business District zoning would give developers in a neighborhood that borders the Town Lake corridor, where height, massing, and density are such crucial design (and political) issues. The only way to make Rainey redevelopment work economically would be to allow basically unlimited density ("floor-to-area ratios") and heights, said Commissioner Phil Reed. "If we say we're going to require all these things we want, like trees and setbacks and living units, then the result is that we need to create a certain number of square feet at a certain per-dollar cost for these things like parking spaces," said Reed. "You put together something that is so difficult that it becomes a beautiful model that never gets built."

The City Council had been scheduled to hold a public hearing on the Rainey plan this week, but that's now been pushed back to Oct. 21. 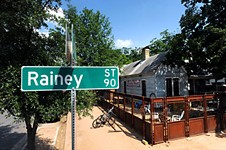 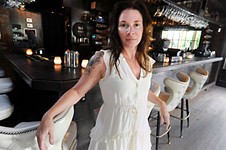