The Schlotzsky's history begins with a really big sandwich 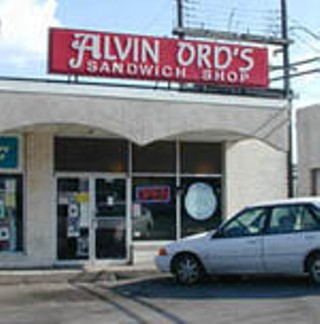 In the beginning, there was this sandwich as big as your head. It came with three meats, cheeses, lettuce, tomato, olives and herb dressing on a delicious and perfectly textured sourdough bun. You could down one of those and sleep like a baby the rest of the afternoon. The $2.95 Original was the first and only child of Schlotzsky's founders Don and Delores Dissman, who modeled the sandwich on the muffulettas they discovered in an Italian grocery store in the French Quarter of New Orleans. The couple introduced their own version of the muffuletta to Austin in 1971, setting up shop in a modest little space at 1301 South Congress. They came up with the name Schlotzsky's for no other reason than it seemed to fit.

Schlotzsky's became a big hit in South Austin, so the Dissmans decided to open a second store in Dobie Mall, targeting the hungry student population. In 1977, emboldened by the success of the two stores, the couple plunged into the strange new world of franchising, and before long the sandwich maker's offspring began popping up in towns well beyond Austin's borders. 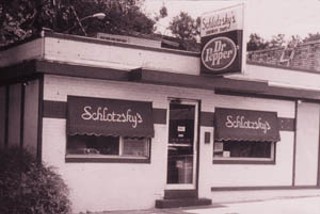 Sketchy local lore recounts that Alvin Ord's Sandwich Shop, another Austin native, was born of a falling out between the Dissmans and a former business associate, which evolved into a bitter feud over who held the rights to the beloved bread recipe. Schlotzsky's won the argument, and now the early-day sandwich rivals couldn't be more different. Alvin Ord's operates a handful of sandwich shops in small towns outside of Austin, while Schlotzsky's went from a hole in the wall to Wall Street to more than 700 outlets to ... bankruptcy court, where a restructuring plan is in the works that could make or break its future.

About this time, a brash young trio of Austin real estate investors had begun putting the moves on Schlotzsky's. They had just made a fortune off the Rob Roy residential development in West Austin and, with a little money to burn, followed up on a banker friend's suggestion to pursue the little sandwich chain. The partners, Gary Bradley and brothers John and Jeff Wooley, were turned down at first, but a year later, in 1981, the Dissmans accepted just under $3 million for the 100-store company. At the time, the only thing the three partners knew about Schlotzsky's was that the Original sandwich held an important place in their diets during their years at UT. "We had never operated a restaurant, but we knew about marketing," John Wooley said recently. "And from a customer perspective I thought we knew a lot."

As it happened, the new owners had walked into a real mess of a fight between the Dissmans and the franchise owners over a recently established advertising fund that the store operators were expected to help finance. "We were coming out of a different industry and didn't understand the dynamics of the franchisees," Wooley said. "What we've learned since then is that, in every franchise system, about a third of the franchisees will be happy, another third will be neutral, and another third will be so angry you can't imagine what must have gone wrong in their childhood."

The new owners' first order of business was to develop a uniform branding system. They began implementing new menu boards – an unheard of concept back then – and new signs for all of the restaurants. They also introduced whole wheat bread, and a turkey sandwich. But even as things began falling into place for Schlotzsky's, the Wooley/Bradley relationship strained to the breaking point. In 1982, they went through a nasty divorce, with Bradley taking most of the real estate holdings and the Wooleys hanging on to Schlotzsky's.

With Bradley out of the picture, the Wooley brothers invested all the sweat equity they had into learning the business, expanding the menu choices and, of course, continuing to tinker with new and existing menu items. "We moved very slowly in the first 10 years," said Wooley, "because we wanted to market a good product, and we wanted to make the food good and interesting." The brothers took the company public in 1995 and it saw rapid growth throughout the Nineties, exceeding $400 million in sales. Along the way, the deli chain extended an exceedingly generous hand to local charities and nonprofit organizations, and generally established itself as an Austin-centric institution while continuing to expand its global reach. From its one-sandwich beginning, Schlotzsky's has grown to nearly 20 menu offerings and expanded many of its hole-in-the-wall stores to spiffy "fast-casual" restaurants. But in Schlotzsky's current bankrupt state, many old-timers find themselves longing for a return to the days of "One Sandwich. It's That Good."