In the wake of the TRMPAC Indictments, the big players are scurrying for cover 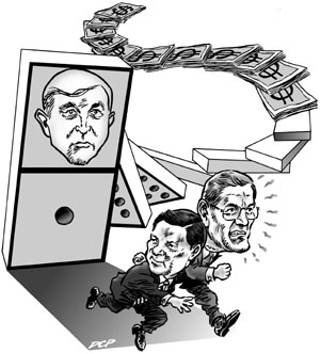 Announcing the Texans for a Republican Majority grand jury indictments last week, Travis Co. District Attorney Ronnie Earle accused the Texas Association of Business – still under investigation – of boasting that it had engaged in "wholesale flaunting" of the law. We presume Earle meant "flouting," but upon reflection either usage might well be appropriate. The TAB indeed bragged that it had "blown the doors open" on the 2002 legislative election – using "issue ads" that were transparently partisan. But the entire cabal of Republican campaign organizations that bankrolled the GOP takeover of the Texas Legislature also seemed determined to fold, staple, and mutilate longstanding Texas campaign finance law into tricornered party hats to be worn at victory celebrations.

It wasn't only TAB leader Bill Hammond who, through word and deed, insisted that Texas' century-long ban on corporate underwriting of political campaigns was nothing but a polite fiction. Hammond and his ilk argue to this day that unless they engaged in "express advocacy" – in their reading, saying "Vote for him" or "Vote against her" – they were free to raise and spend corporate money ("because it's easier") like drunken sailors and blast candidates directly. In a similar way, TRMPAC fundraisers targeted corporate deep-pockets, and implicitly acknowledged the state prohibition on using those donations for anything but routine administrative expenditures, even as they promised to ignore that legal barrier.

"Unlike other organizations," the corporate pitch clumsily promised, "your corporate contribution to TRMPAC will be put to productive use. Rather than just paying for overhead, your support will fund a series of productive and innovative activities designed to increase our level or engagement in the political arena." That sneer at "overhead" is impossible to read as anything other than a dismissal of the distinctions insisted upon by Texas law, and a declaration that the TRMPAC folks were determined to flout it – a course that, thanks to Earle and the grand jury, finally received its first comeuppance last week.

There's been loud pettifoggery from the usual brace of lawyers – unfortunately echoed by some news outlets – that Texas campaign finance law is "vague." But on this score, it has been plain enough for a century that the brazen defiance by the GOP is essentially unprecedented. Commented Craig McDonald of Texans for Public Justice, which filed the original complaint that eventually led to the TRMPAC indictments, "It's about as plain as the law that says you can't steal another man's horse."

Stolen bicycles, instead of horses, came to mind for Campaigns for People's Fred Lewis when he learned last week that TRMPAC's successor, Stars Over Texas PAC, had decided to return thousands of dollars in corporate money that it had begun collecting earlier this year. "I'm glad they returned the money," Lewis said, "but if you steal a bike and return it, you've still broken the law." Lewis has an unforgiving interpretation of campaign finance law that a former county sheriff might consider congenial. Unless that former sheriff is state Rep. Terry Keel, R-Austin, the treasurer of Stars Over Texas (replacing former rep Bill Ceverha, also the onetime treasurer of TRMPAC, who's somewhat preoccupied now with legal matters). Keel insists that the only question of law is how one spends the money, not how one gets it. Keel said he was returning the money – including a $100,000 contribution from AT&T – "until state courts have ruled so as to identify with precision and authority what activities are protected from criminal allegation."

Keel also insisted that SOT's corporate money had been separately designated for administrative costs, but Ethics Commission records reflect that of the PAC's $138,000 on hand as of July, considerably more than $100,000 was from corporate sources (and a couple of big corporate fundraisers have been held since). If the SOTs were planning to spend that kind of cash on "administration," they need to find another office manager – and they definitely shouldn't be trusted with the state budget.

Thus far, this is the best sort of defense the GOP fundraisers have been able to come up with, and it hardly bodes well for their legal position. Despite months of warning that these indictments might be coming, and years of premeditation to ride or cross the nasty edge of campaign law, they seem remarkably surprised that they are suddenly being called to account. Everything we did was legal, they say, or else we thought it was legal, and besides, everybody's doing it.

Maybe they've been taking legal advice from Bart Simpson: "I didn't do it, nobody saw me do it, you can't prove anything!" Maybe a jury will buy that, but I wouldn't bet the farm.

One Hand Washes the Other

Which brings us to Tomstown's thus-far unindicted co-conspirators, Tom Craddick and Tom DeLay. DeLay was on the TRMPAC advisory board, his aide Jim Ellis was a central figure, his fundraiser Warren RoBold worked the D.C. side, he reportedly personally shook down Enron for $100,000 expressly in corporate and executive money to be used in the Texas campaign, and even Westar Energy (which had no interests in Texas) addressed its tainted contribution personally to DeLay. Says the Hammer – whom nobody ever accused of ignorance in money matters – "I was not involved in the day-to-day operations of TRMPAC. ... I raised money for them and made appearances for them when they had fundraisers."

Although TRMPAC executive director John Colyandro has testified in depositions that (as confirmed from phone records) he and other staffers spoke regularly with Craddick about House races and the PAC's activities, Craddick told reporters last week, "I had no idea what they were doing." Most absurdly, Craddick claims he didn't even know what was in the $100,000 envelope he received personally from an executive of the Alliance for Quality Nursing Home Care, and the executive claims the same thing. Pleading ignorance of that sort is not only not a legal defense, it's barely a political one. Rather, it's something akin to a Mafia defense – I did what I was told, and I didn't ask questions.

It remains to be seen what Colyandro, Ellis, and RoBold will do when they sit down with their lawyers and the prosecutors, and consider their predicament and the prospect of serious prison time. But they will undoubtedly take into account that the men who stood most to gain from TRMPAC's heroic exertions – DeLay and Craddick – have begun energetically washing their hands of them.