Nuke-lab bid cools down, but not entirely

Tweet
print
write a letter
With defense behemoth Lockheed Martin balking at the incredible effort required to manage Los Alamos National Laboratory, and Texas A&M University taking a markedly cooler stance toward the project, you'd think the University of Texas would rethink its bid to manage the troubled New Mexico facility. Perhaps they are – but as of late, they've been remarkably mum.

A recent spate of firings and resignations for security-related infractions underscores the problems at Los Alamos, the birthplace of Fat Man and Little Boy – the bombs that destroyed Hiroshima and Nagasaki. Despite its age, Los Alamos is still very active in the refurbishment of aging nuclear weapons and the development of lower-payload so-called "bunker buster" nukes.

The lab has been managed by the University of California since its creation, but chronic safety and security problems led the U.S. Department of Energy to open up bidding on the contract to interested parties last year. Since then, many groups have dropped out or have seen their interest wane. It's not hard to see why – NPR reported this week on administrators' "plan to remove weapons-grade nuclear materials from a section of the lab after determining the area to be too prone to security lapses." But UT's interest is harder to gauge. An Associated Press article in The Albuquerque Tribune last month reported that "the University of Texas system says it is rapidly losing interest." However, a subsequent AP report – after both A&M and Lockheed Martin backed away – held that UT was still "interested (and) will continue to consider a bid." John Pruett of UT Watch, a campus activist group, says, "There's still questions about how much they could gain." Pruett expects the talks to regain momentum once the Department of Energy's formal request for proposals is issued in the coming months. Ultimately, he suggests, if UT "has any involvement, it will be smaller than what they had initially hoped for."

While UT fiddles, opponents of the bid are turning up the heat. Austin's Iconmedia, the brainchild of local activists/documentarians Stefan Wray and Pam Thompson, is currently in post-production on The WMDs Are in New Mexico!, a documentary about Los Alamos. Interviewing activists and lab workers alike, Wray found "all these groups ... that have their own niche" in opposing the lab, focusing on general and specific environmental and social dangers. More info on the documentary, including video clips, is available at www.iconmedia.org. 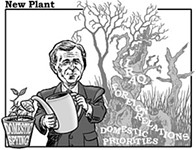