Angelina Eberly returns to the scene of the crime 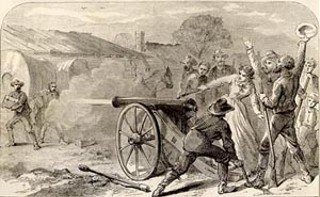 Henceforth, Leslie Cochran will not be the only Austin hero standing at Sixth and Congress in women's clothing. This weekend, city and community leaders will welcome Angelina Eberly back to Austin's main street – 162 years after her last, most famous appearance on the local stage.

In case you don't know this bit of local lore, Angelina Eberly was an "innkeeper" (to be decorous about it) in the raw frontier town of Austin, founded but three years before as Republic of Texas President Mirabeau Lamar's "seat of Empire." By 1842, Lamar had been succeeded by Sam Houston (in his second go-round as RoT president), whose dislike for Austin was well known – "the most unfortunate place on earth for a seat of government" – and who thought the capital should return to, um, Houston, where it had last been before Lamar's term in office.

So, even though the Republic Congress refused to cooperate, Houston – citing homeland-security concerns – decided to move the seat of government anyway and sent the Texas Rangers to round up the government archives (themselves transported from Houston only two years before) in the dead of night. Enter Angelina Eberly – Houston's landlady – who roused the sleeping citizens by firing off the town cannon at Sixth and Congress (blowing a hole in the General Land Office building in the process). A posse of locals duly chased down the Rangers, caught them in what is now Round Rock, returned the archives to town, and Austin regained the upper hand in its struggle to remain the capital city, an honor finally established once-and-for-all by statewide vote in 1850.

On Sunday at 6pm, the 600 block of Congress will be closed to dedicate and celebrate this signal event in the history of Austin weirdness. A new bronze statue of Angelina and the cannon has been commissioned, funded (to the tune of about $300,000), and donated to the city by CAST (Capital Area Statues Inc.), the nonprofit group also responsible for the Philosophers' Rock statue of J. Frank Dobie, Roy Bedichek, and Walter Prescott Webb at Barton Springs. The luminaries of the CAST board – journalists Stephen Harrigan and Lawrence Wright, film folk Elizabeth Avellán and Bill Wittliff, and musician Marcia Ball – engaged the services of editorial-cartoon legend Pat Oliphant, who you probably didn't know is also a renowned sculptor of public art. (Oliphant is Australian by birth, and the Australian ambassador will be present Sunday night.)

Along with the formal unveiling will be performances by the UT Longhorn Band and by Monte Warden – performing a heroic ballad of Angelina Eberly written for the occasion – as well as "special entertainment," courtesy of the Austin Circle of Theatres. Downtown eateries and drinkeries will provide free snacks. The seven-foot, 2,200-pound bronze will be "the first work of public art to reside permanently on the sidewalks of historic Congress Avenue," the city says. Not counting Leslie, of course.