A Beginning for 'The End' 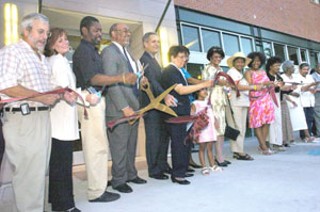 Once upon a time, it was the East End, or simply "The End" – the cultural hub of preintegration East Austin. Last week, after decades of debate and eight years of city-funded effort, the Austin Revitalization Authority opened a new chapter in the history of East 11th Street, with the grand opening of the ARA's Eleven East project – the first major new construction on the corridor since the East 11th/12th Street Community Redevelopment Plan was formally adopted in 1999.

The project's Street-Jones and Snell buildings will house a mix of public and private tenants, including Wells Fargo Bank and the city's Neighborhood Housing and Community Development Office. City officials and ARA leaders joined U.S. Rep. Lloyd Doggett for the ribbon-cutting, the keystone of the ARA's "Soul Fest" last week celebrating the East End renaissance.