Lining Up for Schlotzsky's

It took some last-minute dealmaking in the courthouse corridors, but Schlotzsky's Inc. finally gained clearance on Tuesday to hire its chosen financial adviser to help steer the deli franchiser out of bankruptcy.

Now that the company's attorneys have brokered an agreement with opposing parties, and received what appeared to be little more than a lukewarm blessing from the bankruptcy judge, Schlotzsky's can begin paying $90,000 a month to BWK Trinity Capital Securities LLC to do the heavy lifting necessary to either sell or restructure the company. Schlotzsky's officials, meanwhile, have lined up several potential suitors who are in the due-diligence stage of the matchmaking process, according to company attorney Robert Albergotti of Haynes and Boone. The deli chain initially heard from some 50 different institutions and individuals, Albergotti said. Of that number, 40 signed confidentiality agreements, with more than 10 of them advancing to the next level. Now Schlotzsky's is talking with a subset of the more serious contenders.

Trinity's hiring, however, was not an easy sell to the company's creditors and former top executives. They had raised concerns about Trinity's qualifications and questioned the lack of transparency regarding business decisions being made in the wake of Schlotzsky's Aug. 3 bankruptcy filing. Before a consensus was reached Tuesday, Austin attorney Joe Martinec, representing John and Jeff Wooley, the brothers who ran the company for 23 years before their surprise ouster in June, told the court that his clients' main objection was that "Trinity comes with an iron curtain."

Thus began an hour of private talks, with parties later emerging to declare their willingness to sign off on Trinity's hiring. In exchange, company creditors and the Wooleys will be given more access to information regarding the company's future, save for the identities of potential buyers for now. By Albergotti's estimates, the names of possible suitors would be disclosed some time around mid-October, assuming there are two or three bidders willing to back up their offers with financial deposits.

Trinity did not get all of what it had hoped for, however. U.S. Bankruptcy Judge Leif Clark delayed a decision on the proposed "success fee" the firm would get when Schlotzsky's emerges from bankruptcy. That amount – a minimum of $1 million – is, in the court's view, a tad over the top. As it is, Trinity's monthly fee alone "looks pretty darn generous," Clark said, warning that the relatively young financial firm "better be really good in order to justify this."

In another matter, franchise owners failed in their bid to have their own collective voice in the bankruptcy process, although the court allowed that the decision was a close call, which could change in their favor at some point. But not now. Two franchisees – one from Dallas and another from the Raleigh, N.C., area – had offered testimony they hoped would bear out their claim that the established creditors' committee, representing a wide range of businesses owed money by Schlotzsky's (from GE Capital to Coca-Cola), doesn't fully represent their interests, even though two franchise holders have a seat at the creditors' table. Their pleas were met with opposing arguments from all sides – the creditors, the bankruptcy trustee, and, of course, the company. In the real estate department, the judge granted the company's motion to hire Hilco Real Estate LLC to provide consultation services on Schlotzsky's portfolio, including the sale of certain company-owned properties.

Two other contentious issues – a company motion to cancel existing contracts with area developers of franchised restaurants, and the Wooleys' push for a shareholders meeting – were postponed until Oct. 8. Schlotzsky's officials assert that such a meeting would be disruptive to the bankruptcy process. But with some coaxing from the U.S. Securities and Exchange Commission, company chief executive Sam Coats has committed to holding a meeting no later than Dec. 13.

The daylong hearing brought out a huge cast of lawyers whose jobs in the multilayered case range from lead roles to bit parts. Those lawyers who couldn't make it into San Antonio tuned in by telephone. Meanwhile, the Wooleys – who at this point are more interested in recouping some of the millions they've invested in and loaned to Schlotzsky's than in winning back their jobs – are shopping an unsolicited proposal to the company and its creditors.

John Wooley, the former CEO, believes the plan carries a higher value – somewhere in the neighborhood of $65 million – than what Schlotzsky's might get from a competing proposal. "We're the unofficial stalking horse," Wooley said. Recently, the brothers had an opportunity to present their plan to the Schlotzsky's board of directors that fired them three months ago. "They were polite and courteous," Wooley said of the meeting. "They listened, but they weren't as engag[ed] as I would have liked." 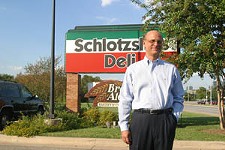