For fair prosecution, the numbers just don't add up 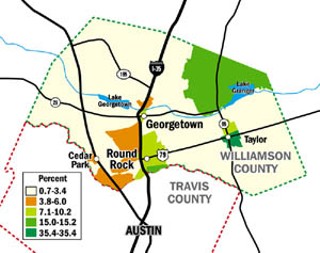 African-American population in Williamson County (as % of total) by census tract – 2000 census data. For a larger map click here.

Not only is Williamson County a pretty white place, but it's a rather segregated one as well. As the map shows, the south side of Taylor, where 35.4% of the residents are black, is far and away the most concentrated area of African-American settlement in the county – and, not coincidentally, has been the site of some of Williamson's most aggressive anti-crime efforts (see "Turning Taylor Around").

In percentage terms, Taylor's black population is more than twice that of the county's northeast corner around Bartlett and southern fringe between Round Rock and Pflugerville; those areas, in turn, have nearly twice the black population of the rest of Williamson Co. As with Travis Co., African-Americans are heavily concentrated east of I-35 – even within the cities of Georgetown and Round Rock.