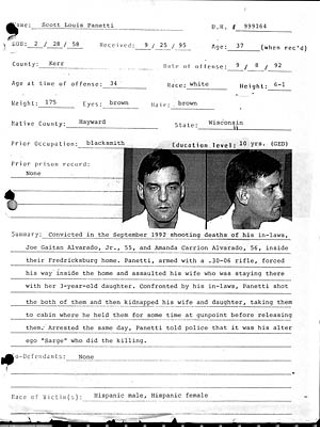 According to Scott Panetti, the state of Texas wants him dead in order to stop him from "the gospel of the Lord King." That, of course, is not the documented reason that the state intends to execute Panetti, who was convicted and sentenced to death for the Sept. 8, 1992, murder of his in-laws, Joe and Amanda Alvarado, at their house in Fredericksburg. But whether Panetti, a diagnosed schizophrenic, understands that the Alvarado slaying is the reason he is facing death is the question before U.S. District Judge Sam Sparks, who is tasked with determining whether Panetti is competent to be executed.

Prior to 1992, Panetti had been hospitalized at least 11 times; in 1986, believing that demons were in possession of his house and furniture, he buried his furniture in the back yard and slashed at his walls with a knife in an attempt at exorcism. Panetti was released from his last hospitalization just two months before killing the Alvarados. When he turned himself in to police the afternoon of the murders, he told authorities that "Sarge" – later identified as a recurring auditory hallucination – was responsible for the slayings.

Panetti had taken antipsychotic drugs intermittently prior to the murders, but was heavily medicated during a competency hearing to determine whether he was capable of understanding his situation and aiding lawyers in his defense; in September 1994, a jury determined that he was competent to stand trial. By the time the trial began in the fall of 1995, Panetti had stopped taking his medication; still, Kerr Co. District Judge Stephen Ables did not intervene when Panetti decided to forgo representation by an attorney and to defend himself. During the trial Panetti dressed in a purple cowboy outfit, filed numerous rambling legal motions, and sought to subpoena nearly 200 witnesses – including Jesus Christ, John F. Kennedy, and Anne Bancroft.

During two days of testimony last week, psychiatrists and forensic psychologists took the stand to offer their opinion on Panetti's state of mind. To hear the state and its experts (who were paid at least $10,000 for their assessments) tell it, Panetti is perfectly competent to face lethal injection inside Texas' death chamber. Mental illness does not preclude competency, argued Assistant Attorney General Tina Dettmer, noting numerous times that Panetti was already deemed competent back in 1994. Just because Panetti is delusional, Dettmer said, does not mean that he isn't capable of understanding why the state intends to kill him.

Defense attorney Keith Hampton countered that the law requires that Panetti understand, both factually and rationally, why he is being put to death in order for him to be considered competent to die – an understanding, he says, that Panetti clearly does not have. To illustrate his argument, Hampton called four doctors to the stand (one received $1,000 for the consultation; three took on the task pro bono), to assess Panetti's mental state. According to Mary Alice Conroy, a board certified forensic psychologist, Panetti is aware that he is on death row, but doesn't understand the connection between the Alvarado murders and his current status. Instead, she said, Panetti believes he is slated for execution as "part of spiritual warfare" and that any other explanation is a "sham." His "flight of thought" is marked by long bouts of conversation featuring "loose association between topics," which is hard to fake, she noted in response to a state assertion that Panetti may simply be a malingerer. At one point during their conversation, Conroy said, Panetti went from talking about shaving equipment to talking about Darwinism and creationism, naval supplies, the Titanic and Noah's ark, and then into a discussion about the governor of Malta and New York judges. That type of thought chain, she said, "would be almost impossible to fake."

Conroy's assessments were shared by two other psychologists, Susannah Rosin and Mark Cunningham, and by psychiatrist Seth Silverman. "He is very tangential," Silverman said, and "very pressured; he can't keep his thoughts together." Silverman said that he asked Panetti numerous times about the Alvarado killing but that Panetti was insistent that Sarge had killed them. "He takes no responsibility," Silverman said. Panetti does not understand the connection between the murders and his impending execution: "He doesn't believe that is the reason he is to be killed," Silverman said. "He believes [it is] because he preaches the word of the gospel; he's very insistent about that." After reviewing 11 years' worth of Panetti's psychiatric, military, and Veterans Administration hospital records, his competency hearing and trial transcripts, and numerous additional affidavits and other documentary items, Silverman, Rosin, and Cunningham each opined that Panetti is not competent to face execution.

Conversely, after spending one hour interviewing Panetti, state-retained psychologist George Parker and psychiatrist Mary Anderson each said that while they weren't able to determine, conclusively, whether Panetti is competent, he is likely able to understand his circumstances and is therefore likely eligible for execution. Parker told the court that he found it "hard to believe" that a person, who at times could be reasonable, simply wouldn't understand his circumstance. "So I don't understand why he wouldn't understand what the state is up to here and what this is all about," he said.

Parker and Anderson wrote in a report to the court that Panetti "is able to understand direct questions ... if he were willing to do so," they wrote, but that he "deliberately and persistently chose to control and manipulate our interview." For example, they wrote, when asked if he had been convicted of capital murder, Panetti wouldn't answer and instead told them that he has "lost the ability to choose," Panetti told them. "I do not know right from wrong. But the Lord does. And so I follow the Lord." Thus, the doctors concluded that "[a]lthough Mr. Panetti chooses not to discuss the reason that he is to be executed, he has the ability to understand the reason he is to be executed."

Sparks' ruling is expected later this week. If Sparks rules in favor of Panetti, Hampton said, it would be the first time that a Texas death row inmate has been determined to be incompetent to face execution.