A ringside seat at the AMN / AMP / ACTV death-cage match

The city's franchise agreements with Time Warner Entertainment and Grande Communications call for the cable providers to provide at least nine, and up to 13, "public, educational, and government" channels to subscribers – or even more if the channels are "fully utilized" or as the providers add more capacity through digital transmission.

In a separate provision, though, the franchise agreements reduce the number of PEG channels by one to accommodate a channel "for the exhibition of programming concerning Austin music." Hence, Channel 15 – the Austin Music Network today, perhaps the Austin Music Partners channel next year – is not really an "access channel" and isn't required to be noncommercial like the eight PEG channels.

The city and county, of course, use their channels for broadcasting public meetings, along with occasional bagatelles like The Daryl Slusher Show, while AISD and ACC primarily use their channels for tele-course educational programming. That leaves Austin Community Television's three channels – "access" as we know it – which are programmed on a first-come, first-served basis by citizen producers, and funded by operational grants from the cable companies of 35 cents per subscriber per month. Time Warner and Grande also contribute to the cost of the technical equipment required for all the PEG channels. 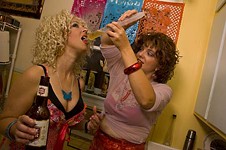