Is There a Doctor in the House?

Below the budget storm clouds, plans form for a UTMB campus at Mueller 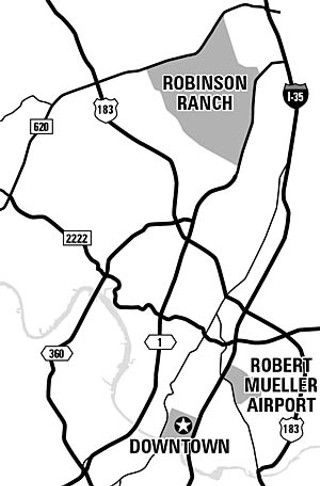 Reps. Mike Krusee and Jack Stick envisioned a big medical school campus at Robinson Ranch (newly annexed by the city of Austin), which straddles their districts, but doctors would much prefer a location closer to Downtown and Brackenridge – like, for example, land next to the new Seton Children's Medical Center at Mueller.

The Travis Co. Hospital District board has seen the future – and it's not a peace treaty between city and county officials, whose all-or-nothing funding battle grows wackier by the day.

Looking well beyond the immediate fray, in its longer view the board is informally considering a new proposal that could figure prominently in the hospital district's delivery of indigent health care services. University of Texas medical officials are working all angles to win support for bringing an academic health center to Austin, which would serve as a research and teaching arm of the UT Medical Branch at Galveston. A UTMB regional campus, even if not a full-fledged medical school, could by extension help maximize the ability of the hospital district to serve an expanding population of indigent and uninsured residents. (While the current UTMB proposal is not subject to direct district approval, the two entities would inevitably work closely together.) The idea has taken off in a big way and is already generating a buzz about the possibility of UTMB taking control of and expanding the hospital district's clinic system, which the city will continue to run while the district gets on its feet.

Tentative plans would have UTMB digging in at the former Robert Mueller Municipal Airport site, where the city has already set aside a 15-acre parcel for unspecified medical use. The property is next door to a new children's hospital that the Seton Healthcare Network expects to open in 2007.

Mindful of the political implications to be considered in brokering a UTMB agreement on Mueller property, City Manager Toby Futrell cautioned that the proposal is not anywhere near being finalized. "A lot would have to happen in discussion with the surrounding neighborhoods, the Mueller Redevelopment Advisory Committee, and Catellus," she said of the San Francisco-based company overseeing the redevelopment of the site. "But the city is ultimately interested in attracting a medical education and research facility to Austin for a number of obvious reasons. Because of its proximity to Children's Hospital and Brackenridge Hospital, Mueller is a likely prospect."

Jim Walker, a Central Austin neighborhood leader who heads the advisory committee of Mueller stakeholders, pointed out that because the university has a poor record of outreach east of I-35, UT officials would do well to start sharing their medical proposal with East Austin neighborhood leaders. The UTMB plan, Walker continued, "has to be of benefit to East Austin beyond the Mueller site boundaries. What we need to know is, what is their 30-year plan, or their 40-year plan? Are they going to offer dental care and provide more immunizations to AISD students? And is UT going to take a proactive approach to reinventing the way they are perceived in East Austin?"

Also unsettled is the question of whether the land would be donated, leased, or sold to UTMB. "The model in other communities usually involves donated land by the local jurisdiction, with the facility sometimes being built through philanthropy," Futrell said. For now, though, the city's "conceptual discussions" center on a long-term lease, with UTMB contributing to help offset the infrastructure costs of the overall Mueller redevelopment project, Futrell said.

While Dr. Kenneth Shine, the UT System's executive vice chancellor for health affairs, has been working out the nitty-gritty details with the city, other backers – many of them local physicians with UTMB ties – are tending to logistical matters and setting fundraising goals. If there is one drawback to the site, they say, it's that it would not accommodate a larger expansion should UTMB decide to move its main campus to Austin from Galveston, where it dropped anchor over a century ago. Any such transfer would require much more than an act of the Legislature, however. "It would take doomsday to get UTMB out of Galveston," one doctor observed of the islanders' fierce determination to keep the medical school where 70% of Texas voters said it should go in an 1881 election. Way back when legislators first passed the bill to establish a UT medical school, the mandate specified that the school be located anywhere but UT's flagship city.

For now, Republican state Reps. Jack Stick of Austin and Mike Krusee of Round Rock, and the rest of Central Texas, for that matter, will have to be content with a regional campus. Stick and Krusee have pushed the idea of landing a medical school at Robinson Ranch in far North Austin, where a vast spread of raw land could easily accommodate a large campus and the pharmaceutical and bio-related companies that would follow. But doctors reflexively wince at the thought of an academic setup located miles from UT and the hospitals that provide the training ground for residents. Before Seton scrapped its plan to build a new children's hospital up north at Parmer Lane and I-35, physicians had jokingly referred to the location as "Pflugerville."

UT medical officials instead saw Mueller as a logical choice for a start-up. Dr. Robert Askew, a retired Austin surgeon who serves on the UTMB Development Board, envisions a fairly small, not terribly expensive operation. "You don't need a lot of brick and mortar for a regional campus," he said. "A conference room and some offices should do it." There's one other important matter: "We're circling the runway waiting for the [UT System] regents to give us final approval," Askew said of the vote that may be forthcoming at the UT Board of Regents' November meeting.

Askew, along with county Probate Judge Guy Herman, was one of the county's pioneer proponents of a hospital district, an effort that actually started long before plans got underway two years ago. And like Herman, Askew went on to serve on the steering committee that formed to pilot the district's course to an election victory in May. Askew envisions a mutually beneficial relationship blooming between UTMB and the hospital district. For one, Brackenridge would become a full-fledged teaching hospital with a steady crop of residents and faculty. That's assuming, of course, that UTMB can forge a contractual agreement with Seton, which leases and runs the hospital. It's no secret that UTMB has been champing at the bit to enter the Central Texas market. It has one foot in the door at the new Women's Hospital on Brackenridge's fifth floor. The city converted the floor into a "hospital within a hospital" after the Catholic Church ordered Seton to stop providing reproductive health care services to indigent women at Brack. The religious edict may have been a slap in the face to many Austin women, but it was manna from heaven for UTMB, which jumped at the opportunity to begin carving a capital city niche.

Beyond indigent care, a medical school presence in Austin would provide huge benefits for Brackenridge's trauma center, says Dr. Donald Patrick, who serves on the hospital district board and is the executive director of the Texas State Board of Medical Examiners. As a neurosurgeon, Patrick spent 23 years of his medical practice in the Brackenridge trauma unit, the regional hub for emergency trauma patients. On the whole, the city is long overdue for an academic medical presence, Patrick says. "Austin has a very, very large drawing area, a very sophisticated medical community, large hospitals that are incredibly busy, and state-of-the-art equipment. It's an ideal situation for a medical school, and if not a medical school, at least a regional campus," he said.

On the Other Hand –

Anne Dunkelberg, senior policy analyst and assistant director of the Center for Public Policy Priorities, sees several benefits to UTMB's presence in Austin. At the same time, she advises against jumping headlong into a relationship without a great deal of forethought on several levels. "Having a real teaching program is generally considered to be a big benefit to a major urban hospital, and certainly we're one of a few that doesn't have a teaching hospital," she said. "Generally speaking, it's a desirable way to cross-subsidize a public hospital and help resolve some manpower and staffing problems." But other dynamics need to be considered, Dunkelberg notes, such as how UTMB will fit into the political landscape that includes the existing medical community, private hospitals, and government entities. "These types of town-gown issues can get complicated, so they need to be thought about and anticipated when you're moving in that direction."

Indeed, UTMB has been embroiled in some well-publicized battles with other communities over the years, with most of the disputes centered on the nickel-and-dime issues of indigent health care. Similar funding rifts have also formed between the Texas Tech medical system and El Paso County. Should UTMB's proposal pan out at Mueller, the Travis Co. Hospital District board might first want to learn some lessons from other districts – just as soon as it can extract itself from center stage in the city-county fracas.

Clearly, the board might be on firmer ground by now if not for the controversy over a $33 million hospital reserve fund that the city shifted to its General Fund in 2002. The reserve's transfer came to light only recently, when the city passed the health care torch to the county's control.

In spite of the disturbance, the district board managed to clear one hurdle Wednesday night with the passage of an $84.9 million budget (the tally as of press time). The approval followed last week's hearing, which drew surprisingly little resistance from tax watchdogs. Property taxes – at a rate of 7.79 cents per $100 property valuation countywide – will feed more than half of the district's budget, with the rest coming from non-tax sources like lease payments, tobacco payments, etc. City residents, who have until now paid the bulk of indigent health care taxes, will be eligible for a 20% exemption on their total tax bill. The county commissioners will take up the budget Sept. 14.