A response to the Rev. Sterling Lands' charges of coroner misconduct 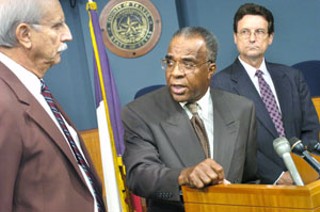 Travis Co. Judge Sam Biscoe on Monday announced the end to a monthlong county investigation into allegations that the office of Travis Co. Medical Examiner Roberto Bayardo has improperly handled its investigations into 11 minority Austinites killed by Austin police officers since 1998. "Based on our review of the issues ... and after our review of the information received from the [ME's] office, we have found no evidence of improprieties that would justify an official investigation at this time," Biscoe said.

Rev. Sterling Lands filed a complaint with Biscoe in July, asking that he investigate 11 "senseless and unprovoked killings" of minorities by APD officers. Lands said he was concerned that in each case Bayardo's office ruled that the deaths were "justified or unrelated to any unjustified actions by law enforcement," he wrote on July 30. Further, Lands said, he was concerned about the "countless numbers of blacks who are incarcerated" based in part on court testimony provided by examiners with the ME's office. Lands also raised questions about whether the doctors had perjured themselves and whether each of the examiners had been "properly accredited and credentialed" over the past two decades.

Biscoe said that upon receiving the complaint, he immediately contacted Bayardo and asked that his office gather the relevant documents for review. Bayardo did that, reviewed the materials, and then met with Biscoe, county Emergency Services Coordinator Danny Hobby, and county commissioners for further review of the cases and to answer questions. In short, Biscoe said, they didn't find anything wrong.

A primary issue of concern for Lands is that several of the 11 cases he cites were adjudged by Bayardo to be not homicides but accidental deaths – thus (arguably) reducing the likelihood of consequences for the police involved. In a memo to Biscoe, Hobby, and the commissioners, Bayardo wrote that his office was able to locate autopsy reports for eight of the 11 individuals Lands referred to, but that he didn't have enough identifying information to locate the other three. Of the eight cases, four deaths were ruled homicide – in each case the victim died from gunshot wounds – and the other four were ruled accidental.

In those four cases, Bayardo said, the underlying cause of the victim's death was the "acute toxic effects" of drugs, which were exacerbated during the struggles with police. "Whenever a person is under the influence of a drug like cocaine, the heart is susceptible" to bursts of adrenaline, he said at a Monday press conference. If the victims hadn't been on drugs, he said, they likely would not have died during their altercations with police. But both Bayardo and Biscoe noted that there is an ongoing national "issue" over whether such deaths should be classified accidental – laying the responsibility for death at the feet of the deceased – or classified as homicide, shifting the blame elsewhere.

The classification of those deaths as homicides does make sense, said Bayardo, "because the direct cause of death is the injury, not the drugs." Indeed, Bayardo pointed to an issue summary prepared this year by the College of American Pathologists that addresses the issue. "[I]f one accepts that the struggle contributes to death, it is difficult to argue against a ruling of homicide," the summary reads. "Such a ruling does not necessarily imply intent, nor is it meant to imply 'murder' or wrongdoing on the part of police." Still, Biscoe said, the justice system provides at least six "checks and balances" for cause of death in addition to the ME's opinion – such as the grand jury process, the district attorney, judges, and juries.

That was the only place where Biscoe suggested that Lands' various allegations may be well-founded. Bayardo and his examiners only testify in murder cases – all told, approximately 38 cases each year – Biscoe said, so they couldn't be responsible for the incarceration of "countless" blacks. Moreover, there is nothing to suggest the MEs have perjured themselves – "this complaint is too general to provide an appropriate response," Biscoe wrote in a press release. "To our knowledge, this claim is untrue and without factual support." Regarding accreditation, for a "short period" of time earlier this year, Deputy Medical Examiner Elizabeth Peacock's state license was "not in good standing," after Peacock let her dues lapse; however, Biscoe said the autopsies she performed during that time period are still good, and there's no indication that she'll be reprimanded for continuing to work during the lapse.

Lands, who was pleased with the timeliness of Biscoe's response to his initial complaint, was nonetheless displeased with the judge's "findings." And, he told KVUE-TV, he is not impressed with Biscoe's decision to let the ME investigate itself. And he said it's "ridiculous to me that anyone would buy" the line that the ME's opinions are "checked" by the grand jury process or by the district attorney. To Lands, the way to ensure fairness and accuracy is to employ a third party to observe autopsy proceedings in cases involving confrontation with police.

Biscoe appeared receptive to this idea, saying that he is interested in pursuing the matter further with the commissioners. "In future cases, I would think that on a pilot basis we would try to do that," he said, but added that it doesn't make sense to go back and ask a third party to review the eight old cases – in part, he said, because the victims' bodies are no longer under county control. "I'd rather do this in the future, rather than in the past," he said.