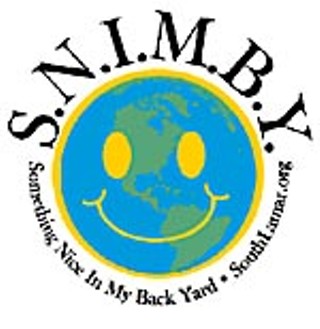 Drawing on a city initiative to upgrade local design standards for national chain stores, a South Austin group continues to press for last-minute changes to a proposed Walgreens drug store, even as the zoning case heads to City Council today (Thursday).

The South Lamar Neighborhood Association has also rolled out a new logo for its SNIMBY ("something nice in my back yard") campaign as a way of illustrating its willingness to accept a major chain in the neighborhood – provided it leaves its nationally branded footprint back at corporate headquarters. On a larger scale, the group's SNIMBY pitch seeks to nudge Austin toward adopting a broad policy of forcing big retailers to comply with local ordinances and design sensibilities. Other cities have already proven what seems almost impossible in Austin, with big chains like Home Depot and Target turning out multiuse developments in place of bland, freestanding big boxes.

The Walgreens case could provide fertile ground to test the City Council's commitment toward better-looking chain stores. Then again, it may be too far along in the process, given the year already spent trying to negotiate a compromise plan that would make everybody happy.

In the end, the SLNA said thanks, but no thanks. But Walgreens did win over one significant South Austin constituency when they decided to hitch their wagon to Maria's Taco Xpress, a South Austin staple that would get a new restaurant out of the deal – at the retail giant's expense – if the council blesses the zoning request. The restaurant's owner, Maria Corbalan, is equally as popular as her restaurant, and in her patrons' view, what's good for Corbalan is good for them. But SLNA president Kevin Lewis hopes the council will consider the Walgreens proposal independent of Taco Xpress. "We support Taco Xpress," he said, "but to make Taco Xpress the focus of this is a distraction from the real issues at hand."

Council Member Brewster McCracken, the council's champion of better building-design standards, said he'd like to see Walgreens make some additional concessions before the council casts what may be the first of three votes. But Walgreens lawyer Steve Drenner points out that the proposed design has already undergone a number of changes, with the addition of native limestone, window awnings, lighting adjustments, enhanced landscaping, and promised street improvements to Bluebonnet Lane, a collector road intersecting Lamar. "There are a lot of things in this design that are in direct response to what the neighborhood wanted," he said, adding that the SLNA has only recently started to push for a multiuse development. "A year ago," he said, "there was no mention of putting residential on top."

In terms of long-range neighborhood planning, one South Austin real estate investor, Brian Rodgers, believes a Walgreens would threaten the eclectic commercial flavor emerging along this stretch of roadway. "South Lamar is like a blank canvas just waiting for urban renewal," he said. Rodgers has redeveloped a handful of Fifties-era buildings in the neighborhood, turning neglected structures into pedestrian-oriented hubs. His latest creation – a splashy green structure with a handful of local retail tenants – was in its past life Fantasy Video, a drab, low-slung porn shop with boarded-up windows. Throwing a retail chain into this type of resurgence, he said, would be like putting a Walgreens at Sixth and Lamar.

Rodgers concedes that the inclusion of Taco Xpress in the proposal might make it harder for the council to say 'No' to Walgreens, particularly since the issue has been framed as a "Save Maria's" campaign. "I love Maria," Rodgers said of the owner. "She makes the best tacos in town. But Maria's is not is any danger. Even if Walgreens bows out, Maria's will still be the tail that wags the dog."

Will Maria's Save Walgreens?
The chain drug store and the indie south side landmark bring their deal to ZAP