Strayhorn vs. Perry: The Prelims

Yet another preview of coming attractions …

Tweet
print
write a letter
The political sniping between Comptroller Carole Keeton Strayhorn and Gov. Rick Perry escalated last week and turned increasingly personal. Strayhorn spoke to a home health care conference at the Downtown Hilton, blasting the state budget cuts to the Children's Health Insurance Program, and then contrasted those cuts with Perry's shuffling of Governor's Mansion expenses (nine employees, including a maid, two cooks, and a porter) to another state agency so it would appear that the governor's budget had been slashed by $300,000. (The maneuver was revealed by The Dallas Morning News last week.)

Strayhorn also sent a headline-grabbing letter to Perry, requesting that he order an immediate end to a "means test" newly imposed on CHIP families (now allowed to have no more than $5,000 in assets), calling it a "mean-spirited" policy that will "literally jeopardize the health of countless children of the working poor." Strayhorn's rhetoric was as acid as her double-entry accounting. "Governor, your maids and cook and porter, I am certain, are vital to your quality of life. Please understand the insurance you are denying children with this new means test is vital to their life, period." Strayhorn said the $300,000 could have drawn down $771,000 in federal matching funds, enough to insure another 930 children for a year.

The governor responded quickly and in kind. His office released a statement that (accurately) pointed out that in early 2003, Strayhorn herself recommended shortening the CHIP eligibility period from a year to six months – estimating a savings to the state of $231 million by effectively dropping 161,800 children. "For her to now use these children as political fodder to feed her ever increasing political appetite," declared Perry spokeswoman Kathy Walt, "is unconscionable."

Then the kettle fired back at the pot – Strayhorn responded that her six-month enrollment recommendation had actually allowed recipients to "access the program more quickly," calling Perry's version "revisionist history." She also insisted that she had never recommended "narrowing eligibility or cutting benefits." Strayhorn said she continues to "listen" to Texans asking her to run for governor, while the gov's office said her "flip-flops ... would make John Kerry dizzy." Ouch. 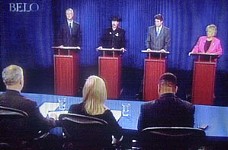