Saving South Congress - for Whom? 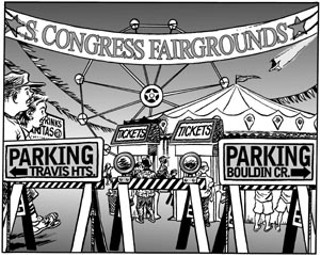 Is the fabric of the South Congress strip wearing thin? Neighbors on both sides of South Austin's Main Street are fed up with First Thursday party animals disturbing their peace and sullying their streets, while proprietors of the sort of funky small businesses long synonymous with the strip feel like they're being cut out of the Southside boom by property owners bent on big plans and big profits.

Right now, the man most vocally accused of taking scissors to the neighborhood's fabric is Güero's owner Rob Lippincott. He co-organized this Saturday's Celebrate South Austin festival – a party that's been an extraordinarily divisive topic in the 78704 ZIP code in the weeks since its conception. Crowds of up to 40,000 total guests are expected to pack the closed-down 1400 and 1500 blocks of South Congress. Attractions include acts such as Del Castillo, Grupo Fantasma, and the Cornell Hurd Band, food and beer vendors, plus carnival attractions and a petting zoo.

To some residents in the adjacent Bouldin Creek and Travis Heights neighborhoods – who have chafed over First Thursday and, back in the day, Aquafest – this scale of event is just unacceptable. But many feel the festival will be more than just a noisy neighbor; homeowners are concerned about the area's evolution into an entertainment district, rather than a shopping street, and old-school South Congress merchants wonder whether they can retain a niche on the rapidly changing strip.

"Celebrate South Austin lays the groundwork for a frightening precedent for South Congress' future as an entertainment district," says Cory Walton, President of the Bouldin Creek Neighborhood Association, which covers the area west of South Congress. (South River City Citizens, which includes Travis Heights, covers the east side.) Walton says people assume the neighborhoods are just an extension of the entertainment, which translates into the parking, peeing, and littering complaints spawned by First Thursday. "It's not practical to stick an entertainment district in the middle of two residential neighborhoods," Walton said.

Leaders of SRCC are no more happy about Lippincott's plans; in an Aug. 27 letter to the City Council, the group echoes the "noise, parking, traffic, and security concerns" expressed by the Bouldin NA, arguing that "A busy highway like South Congress Avenue is not an appropriate venue for a beer and music fest." The SRCC letter also claims the city's approval of Lippincott's latest plans, and the attendant street closures, is in violation of city code. "The proposed music and beer festival will serve no public purpose. The City, however, will expend public resources to further this event," including street closures and traffic control, rerouting Capital Metro buses, and paying APD overtime.

Additional rumblings have arisen from the festival's billing as a charity event. Celebrate South Austin participants include the Texas School for the Deaf, the South Congress Baptist Church, and Iglesia de Cristo, all three of which will net profits from offering paid parking during the fest. Austin Sertoma, the local chapter of a national community service group that's often worked with the School for the Deaf, will staff the beer booths and will receive a portion of the proceeds for their efforts. Most of the proceeds, however, will go to Lippincott's company, South Austin Productions, and the Save South Congress Association, the group Lippincott and other merchants founded in 2000 to combat Capital Metro's light rail plans. "Taxpayers will foot the bill," reads the SRCC letter, "while the main beneficiaries are a for-profit business and an anti-light rail political organization. ... Individuals among us have differing views on the light rail question, but we are united in opposing any such use of City funds."

Lippincott says the SSCA was formed out of fears that a South Congress rail project would snuff out businesses on the strip, forcing current owners to give up choice real estate to outsiders keen on concentrating the area. "Light rail would encourage sales to developers; it would change the nature of South Congress," he said. But neighbors who don't like the way Lippincott may himself be changing the nature of South Congress now see Celebrate South Austin and its proceeds as fuel for the fire that's engulfing the area.

Lippincott has been steadily acquiring properties on both sides of the avenue and has a vision, in his words, for "a mixed-use variety of cool businesses, local if possible, that adds to the mix of the neighborhood ... an un-mall." He said he hopes to attract people from all over Austin to visit the area and won't feel bad about the kind of businesses he brings in.

But Eco-Wise owner Jim Holland says, "It's hypocrisy to say you're saving South Austin's businesses when the ones that made South Congress what it is aren't part of the plan." Holland said he wasn't asked for his approval of the festival and worse, was informed by his landlord (Lippincott) that the lease for the 1950s post office Eco-wise occupies (along with Vulcan Video and Service Menswear) would not be eligible for renewal upon its termination in 17 months. "The neighborhood will lose three valuable businesses to a parking garage," he said, adding that Lippincott's approach to development sacrifices businesses that are valuable to the community. "Save South Austin for whom – the property owners?" Holland asked.

Forced to close up shop, some other merchants echo Holland's sentiments, citing the arrival of more chic, entertainment-related businesses into the atmosphere and blaming their landlords for hiking the rent. "All the people that were a driving force in cleaning up South Congress are being forced out," said Kelly Locker, owner of the furniture store Aqua. Locker said his landlord (not Lippincott) increased the rent by $2,500 a month recently, forcing Aqua to relocate to North Lamar to stay profitable. "Hipness is costing us rent, and shop owners are being pounded by overhead."

But Lippincott justifies South Congress rent increases as an economic inevitability. "When people found condoms and syringes on the street, businesses' rents were less, but now that the street is working, rent is more," Lippincott said. "The neighborhood is evolving, and property owners are trying to maximize their profits. I don't see that as a bad thing."

Terra Toys owner Romalda Allsup also cited inflated rent demands as well as harsh relations with her landlord (not Lippincott) as cause for her landmark store's departure from South Congress to greener pastures on Anderson Lane. "Rent was increased to a point that was not viable for our business," she said. Neighborhood people can't support the businesses anymore, she explained, saying that the influx of more bars and restaurants changes the area's profit structure completely.

Lippincott, who now owns the entire block that contains Güero's as well as other property on both sides of South Congress, belongs to a small group of big-time landowners rolling the dice on the South Congress Monopoly board. While few question that the strip will remain a winner, many wonder who will get to play under the new rules of the Southside game.

Heading to the Fest?

The South Austin Celebration is this Saturday, Sept. 4, noon-9pm, on the 1400 and 1500 blocks of South Congress (between Gibson and Monroe), which will be closed for the event. The musical lineup includes Del Castillo, Vallejo, Grupo Fantasma, Sis Deville, the Cornell Hurd Band, and "special guests." Other attractions include carnival rides, pony rides, a Ferris wheel, a petting zoo, and suchlike for the kiddies, along with food, arts, crafts, and, of course, beer. Admission is free; paid parking ($5) will be available at the Texas School for the Deaf, and free parking with shuttle service is planned from One Texas Center. Event organizers encourage attendees to "be respectful of our neighbors."