All Systems Go!, but no extensions added, to a November commuter-rail vote 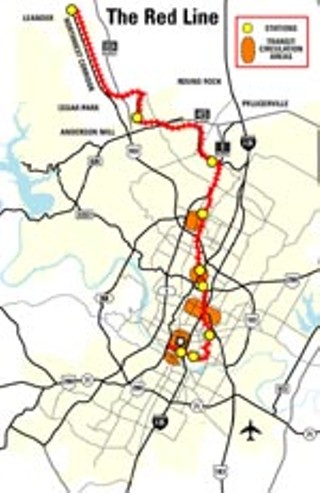 "We are not stalling you, but we have to get it right. And we're not ready for prime time now." Thus concluded a tale of two Walkers, as Capital Metro board Chair Lee Walker told Mueller neighborhood point man Jim Walker, from the dais at Monday's Cap Metro board meeting, that the transit authority's All Systems Go! plan – and especially its proposed commuter rail component – would not serve Austin's most prominent planned transit-oriented development in its first phase.

A similar message went forth from the board to downtown advocates who had likewise pushed Cap Metro to extend its starter line (aka the Red Line) from the Convention Center, its current proposed southern terminus, across to Seaholm Power Plant. The board, instead, voted unanimously to endorse Cap Metro's staff proposal for a commuter rail service run entirely on the existing Red Line track – owned by the transit authority – and called a Nov. 2 referendum, as required by state law, to approve the plan. The board also resolved to, if that vote passes, immediately commence further study of its options for "transit circulation areas," including the Pickle Campus/Gateway area and Highland Mall as well as Mueller and Downtown, with an eye toward bringing future rail extensions in those areas (if any) back before the voters in November 2006.

Since Cap Metro began the All Systems Go! effort back in May, and especially during the last two weeks since agency staff presented their final recommendations, lobbying has been intense for including Mueller and Seaholm, in particular, in this version of the plan. However, a host of speakers before the Capital Metro board, representing various efforts to expand the ASG scope, nonetheless made clear their intention to support commuter rail as proposed anyway. "We're disappointed that it's not in the current proposal to extend to Mueller without another referendum," said Jim Walker, "but we understand why."

Similarly, the Downtown Austin Alliance's Charles Betts noted that "it didn't take long for the DAA to decide we'd be for [rail], and for it in a big way." But the DAA – which joined forces with Liveable City and others as Connect Austin, to push for a downtown streetcar system as an extension to All Systems Go! – "felt a real good connector system was imperative. We may have been a little premature, but we wanted to get that on the table. Certainly, there's some disappointment, but we're encouraged by the commitment to further study."

Much the same message came from the Greater Austin Chamber of Commerce, the Real Estate Council of Austin (which had held out the most strongly for requiring future referenda for any extensions), Liveable City, environmental leaders, bicycle advocates, city officials from Leander, Austin Mayor Will Wynn, and the city Urban Transportation Commission's Patrick Goetz, who noted he "somewhat reluctantly" supported what he calls a "very modest, very conservative proposal." (Goetz had authored a UTC resolution calling for a nonbinding referendum on other more "visionary" options, including streetcars and monorail, but was informed from the dais that such was not possible in Texas. His UTC colleague Mike Dahmus, by contrast, has remained staunch in his opposition to a rail plan he feels doesn't go nearly far enough.)

That left very few people in attendance in genuine opposition to Cap Metro's plans – most notably the leaders of El Concilio, who have fought Cap Metro bitterly and predictably, on this and other issues, since the agency's founding in 1985, and of the Travis Co. Libertarian Party, who in addition to fiscal concerns raised the specter of more traffic congestion, not less, caused by cars having to wait for the train at railroad crossings. (The fact that freight trains already use the Red Line went unmentioned.)

El Concilio's call for "compassion" for Eastside neighbors who would – inevitably, in the group's view – be displaced by rail and attendant gentrification was gently but firmly rebuffed from the dais by County Commissioner Margaret Gómez and former Austin Mayor Pro Tem John Treviño, who said, "I don't want people to think all of East Austin is opposed to what we're trying to do. A lot of things are happening" near Cap Metro's Eastside rail corridor, Treviño added, "and most of those things are good. We may be criticized by some people now, but I can assure you we'll be condemned by future citizens if we don't do anything today."

By comparison, Rail Enemy No. 1 – Gomez's colleague Gerald Daugherty – struck a conciliatory tack; while the county commissioner didn't address the board, Council Member Daryl Slusher, who has been "negotiating" with Daugherty over recent weeks, aired the commissioner's seven conditions for supporting rail, and supplied editorial comment for each, from the dais. For the most part, Slusher was more copacetic with these ideas than, say, Will Wynn was when Daugherty first brought his Seven Commandments down from the mountain. Among Daugherty's concessions since, according to Slusher, is an apparent agreement to seek reallocation of one-quarter of Capital Metro's sales tax funds – to the Central Texas Regional Mobility Authority to reduce its need for toll road revenue – only if the November referendum is defeated. (He had initially called for the money to be moved in advance.)

While Slusher and other board members weren't willing to sign on to such an agreement, or to other attempts to limit future boards' ability to call for new rail elections, Daugherty's position on the money likely reflects political reality – one reason why Cap Metro has been so urgently playing it safe with All Systems Go!, rather than risk a defeat it literally can't afford. In which light, the apparent declawing of Cap Metro's fiercest foe is itself an accomplishment. "I hope we can continue to work together," said Slusher, "as we get on down the road ... or the track."

What's On the Ballot

The language that will actually be on the Nov. 2 ballot is basically identical to what appeared in the failed 2000 light-rail referendum, authorizing Capital Metro to operate a fixed rail transit system. The "descriptor language" that Cap Metro needs to publish in its notice of election – which by state law needs to contain more details – is as follows:

"The purchase, acquisition, construction, operation, and maintenance by Capital Metro Transportation Authority of or relating to an urban commuter rail service between the Austin Convention Center and Leander, Texas, on an existing rail line owned by [CMTA]. This starter urban commuter rail service is part of the All Systems Go Long-Range Transit Plan of [CMTA] that also includes hike and bike trails along some existing railroad right of way, expanded local and express bus routes, new Rapid Bus routes and high frequency shuttle circulators that together provide connections to rail stops, new transit centers, new park and ride facilities, as well as major destinations in the Austin area, and would be implemented with no new or increased taxes and no issuance of bonds."

What's On the Map

The All Systems Go! plan includes new express bus and "rapid bus" service on many local and regional traffic corridors, as well as future "regional" commuter rail service on the MoPac corridor (the Union Pacific line) and the abandoned MoKan corridor east of I-35 (once to be the likewise-abandoned "western alignment" of State Highway 130).

But none of that is what you'll actually be voting on Nov. 2. Instead, the Red Line – the "Downtown/Northwest Starter Line" of "commuter rail urban service," in Metrospeak – will run from the Convention Center to Leander. Stops in between (marked with circles on the above map) are currently planned for:

• MLK and Airport (the Featherlite tract);

• Braker Lane (near the Pickle Campus); and

There's no station planned near Mueller, which lies between the Featherlite and Highland Mall stops, but Mueller is part of one of four "transit circulation areas" where Cap Metro has outlined a timeline for further study. Such studies would be required for future rail extensions by federal law, though the transit authority could have included the option to build those extensions in the descriptor language for this election had it so chose. However, the agency says, if the Nov. 2 vote passes, it will immediately convene community advisory boards, kick off new public involvement processes, and hire planning consultants to work on these areas, so that – if they indeed are destined for future rail – another election could be held as soon as November 2006.