How Do I Look? 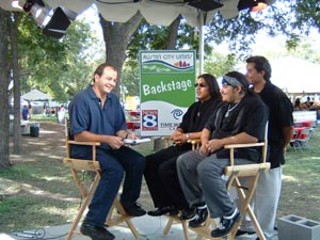 Women will recognize we're not talking eyeglass frames, but make-up. And I found just the right compact the ol' fashioned way: splotch-testing dozens of shades at the Dillard's cosmetics counter. In hindsight, I may have been a little too self-conscious. I made sure the saleswoman knew I was working in television news. Without missing a beat, she said, "Honey, it's okay. That's what all the closeted cross-dressers say."

Come to think of it, there was a time I could have imagined Leslie Cochran doing a style segment for News 8; in its infancy, News 8 desperately needed content. So desperately, in fact, they took a chance on me. Back in November of 1999 I may have been unproven television talent, but their intentions were good: Austin takes its music seriously, so News 8 would too. It wasn't just editorial genius, but practical too, because music fans aren't watching 6pm and 10pm newscasts – they're more likely to watch at 1am or 1pm. For nearly five years, my pieces have run 12-24 times each. Add our wall-to-wall coverage of SXSW and the Austin City Limits Music Festival, and it's safe to say no station in Austin, or anywhere for that matter, has better committed itself to covering local music.

Like the station, I too have been an on-air work-in-progress. The Chronicle was curious what I've learned. Funny they'd ask:

• Let the Pictures Tell the Story: Unlike print journalism, the beauty of television news is that with so many images onscreen, you don't need to be overly descriptive. Yet the initial instinct is to babble incessantly about what you're seeing. Anybody who's been to a Sixth Street New Year's knows the star they raise is a chintzy piece of shit. Viewers saw the pictures the year I covered it live, so it was probably overkill to have suggested on air that they pass a collection plate to buy us a real New Year's party. And when the anchor asked me for my News Year's resolution, I probably also shouldn't have said, "To be anywhere but here this time next year." (At News 8's insistence, New Year's is a now a night off for me.)

• The Mic Is Always On: The surest route to the station's internal blooper reel is to forget that the wireless mics are always on. Calling your girlfriend with a mic on is to invite the whole control room onto a party line. Worse still is forgetting you're on News 8, not The Sopranos. One four-letter slipup and you can start sharing your morning lattes with Robert Flores.

• Get to Know the Staff: Like any workplace, TV newsrooms are gossip fishbowls, only each fish is armed with a camera and microphone. (One News 8 producer famously excelled at unsealing and resealing the cards that come attached to flower deliveries before they hit the recipients' desks.) On the other hand, getting to know the underpaid and underappreciated production staff is invaluable – they alone can make you look like a king or a jackass. A patient and pleasant News 8 editor they call C-Rod has saved my ass week in and out. The day he quits is the day I do the same.

• Test Your IFB: IFBs are fancy earpieces. In the field, the earpiece is your best friend or worst enemy. CNN uses me live from SXSW and ACL each year, and I've yet to have a clear connection to my interrogator in Atlanta. One SXSW I made out every fifth word of the anchor's questions. I shot back some really insightful answers. Unfortunately they were to questions she never asked. My grandmother in Florida was impressed I was on CNN. She also thought I was drunk.

• Don't Watch Yourself: They say the camera adds 10 pounds – in my case it adds 20 and pushes back my hairline six inches. In the days when I had the stomach to watch myself, I saw an interview I did with Lance Armstrong and noticed a node on my neck the size of a kiwi. It turned out it was merely a cyst from an ingrown hair, but there's nothing funny about appearing alongside the world's greatest cancer survivor and thinking you've diagnosed your own cancer from cable TV. Ultimately, this isn't much of an issue, because my promise to myself works well for the viewer too – unless I'm live, you won't see me in my pieces. No stand-ups. No props. Knowing you have a face for radio is half the battle.

Five rules don't begin to cover the education News 8 has given me. Nearly five years into it, television news is still a thrilling combination of instant gratification and instant embarrassment, and I'll do it as long as they'll have me. There's something inexplicably sexy about being in people's living rooms, if only for two minutes at a time. Take News 8's new Video on Demand service – digital subscribers can request archived content day or night. Lately, I've found demanding some Andy Langer irresistible. I know, it breaks rule No. 5. But what can I say? I like the way that guy wears his make-up.