A Bumpy Landing at Mueller? 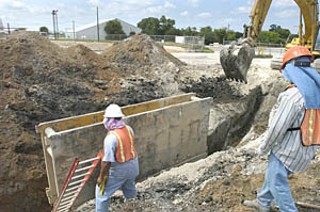 After a generation of wishing, hoping, planning, and deal-making, the Robert Mueller Municipal Airport redevelopment project enters a critical decision-making phase this fall. Some key items on the prelanding checklist:

TOD Without the T?

Mueller backers were thrown for a loop last week when Capital Metro announced its plan for a rail system – to be voted on in November – that doesn't serve the old airport or even include a station in its vicinity. As Cap Metro's All Systems Go! project stands now, Mueller will be the object of further study, and any extension of rail service to the project would have to go before voters in a future referendum. However, the Mueller master plan presumes rail service and has already won awards and honors as a shining example of "transit-oriented development." It's unclear whether either surrounding neighbors or the prospective master developer, Catellus Development, will continue to support the densities and uses in the Mueller plan (estimated to generate nearly 75,000 peak-hour auto trips per day) if rail is an uncertain, faraway prospect. Local power players (including Mayor Will Wynn and state Rep. Mike Krusee, R-Round Rock, the Lege's transportation czar) have joined Mueller neighbors in calling on Capital Metro to include Mueller service in this electoral go-round.

Pushing Through the PUD

Today (Thursday), the City Council is set to give its final approval to the zoning case – the Mueller Planned Unit Development – designed to implement the master plan. The PUD calls for 31 different deviations from existing city code to make real the plans crafted by Mueller consultant ROMA Design Group, which call for up to 6,500 dwelling units (including small-lot "yard houses" and semidetached "row houses" as well as multifamily). The plan also includes up to 5.33 million square feet of commercial space (including retail, office, and the already approved Seton Children's Medical Center and existing Austin Studios); 140 acres of parks and open space; sites for an elementary school and new fire station; and a dozen new roads, two of which already have names. (The Seton site is at the corner of Mueller Boulevard and Barbara Jordan Boulevard.) The Planning Commission's recommendation to delete "construction sales and service" – read: Lowe's Home Centers – from the permitted uses in Catellus' proposed I-35/51st Street retail center was reversed by the council at first reading and is unlikely to reappear.

The Deal With Catellus

The city and the San Francisco-based developer are in the final stages of negotiating the massive master development agreement for Mueller, the largest real estate deal the city has ever done. This agreement – expected to come before the City Council in late September – will give the public its first look at what have heretofore been secret details of the financial structure of the $175 million project, a point of great interest earlier this year to the advocates of Keep the Land, a group formed to push the city toward leasing, rather than selling, Mueller's 700 acres. As it stands, the city is expected to sell Mueller parcels to Catellus, which will then in most cases resell them to other developers or, ultimately, homeowners. The funds thus raised, city staff has argued, are necessary to allow the city to install vast amounts of road and utility infrastructure on what is now basically raw land. The MDA also promises to contain important details about Mueller-specific codes, covenants, and regulations – such as architectural design standards – and their enforcement; reportedly, Catellus has proposed a model that would give Mueller residents and property owners substantially more power than is typically enjoyed by an Austin neighborhood or homeowners' association.

Also in the MDA will be the jumping-off points for Catellus' effort to meet the Mueller plan's ambitious affordability goals. At minimum, 25% of Mueller's owner-occupied housing would be affordable to buyers at 80% of median household income or below; for rental housing, the income threshold drops to 60% of MHI. Mueller backers and housing advocates would like to see more than this – substantial set-asides of housing for residents making 50% or even 30% of MHI, including people working in the expected 10,000 jobs created by the project. Moreover, notes Jim Walker, chair of the city's Mueller commission and leader of the Mueller Neighborhoods Coalition, the blank slate of the old airport offers a chance to crack the toughest nuts in the affordable-housing business – "how you disperse housing through the development and intentionally create mixed-income communities, and how you help families build equity while maintaining the unit as affordable after they move on. The community is looking to us to strive to solve those problems."

Walker adds that "this discussion will continue with the same level of energy after the MDA is signed. We're talking about a challenge to familiar models, and we should be challenging those models at this scale. But there's no silver bullet. It's unreasonable to turn to Catellus and just say 'Do it!'"