Austin @ Large: Recall of the Mild

Want to dump Will Wynn? Be careful what you wish for. 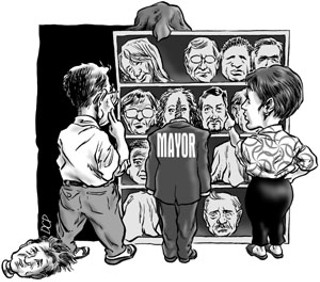 In his regular Monday "Getting There" column last week, Statesman trans-porter Ben Wear raised what seemed to him, and to many, an obvious question. Why were angry Southwest suburbanites, inflamed by the prospect of having to pay for their own lifestyle choices, seeking to recall Mayor Will Wynn and Council Member Brewster McCracken, but not Council Member Danny Thomas, who likewise voted for the toll road plan as a member of the Capital Area Metropolitan Planning Organization's board? (The fourth council member on CAMPO, Daryl Slusher, voted no.) Much speculation followed, mostly concerning Thomas' ethnicity and the apparent fallacy that he, but not his colleagues, represents a single-member district. But when posed the question directly, recall yell leader Sal Costello noted that, well, Thomas was term-limited and the others weren't.

This made me gain a little respect for Costello, since this fact was both true and relevant – unlike so much of the crap that's been spewed forth on this issue and from that tribe. But sadly, it didn't last, or perhaps Costello never believed his rationale in the first place. Within a couple of days, the "Austin Toll Party" recall effort announced it would, indeed, add Thomas to its hit list.

Which is to be expected, since this recall business is not about changing policy – which could be accomplished without the Toll Party theatrics – but about "making a statement" and "expressing anger" and otherwise acting out in public by a bunch of self-proclaimed rebels who've gotten high on their own smoke. I think it's doomed to fail, but hey, it's a free country. Knock yourselves out, guys. Just remember the cliché: Be careful what you wish for.

Unlike some people I've talked to, who think the Toll Party is simply going too far, I don't object to the recall effort, which will test – and, I suspect, disprove – the thesis that the toll road jihadis speak for a silent Austin majority. Plenty of people seem to believe that government works like American Idol, that spamming the CAMPO board with mass e-mail represents a genuine popular uprising, and that because they don't support toll roads it's obvious that nobody else does either. But even if every one of those 6,000-plus e-mailers is an actual Austin voter who can sign an actual petition – unlikely – that's only about 15% of the signatures the Toll Partiers will need to force a recall election.

I'll be glad to stand corrected if the Toll Party delivers its 42,210 signatures to the city clerk. (That's 10% of registered Austin voters as of the May city election; when the day actually comes, the number needed may well be higher.) But that will take a while, even with Linda Curtis and other professionals in tow. It took months for Beverly Griffith, Jackie Goodman, and Slusher to gather fewer than half as many signatures to bust term limits; the last serious effort to mount a City Council recall (against Louise Epstein and Bob Larson back in 1992) petered out well short of making its numbers. By the time the Toll Partiers come anywhere near 42,000 signatures, toll roads may be an annoying but accepted fact of life, and the three intended recall victims will be well past the halfway point of their terms. Indeed, by that point, CAMPO will already be nearing a vote on its next 25-year transportation plan, a much better occasion than a recall election for reconsidering toll roads; its expected April vote on that plan could be seen as a natural time limit on the Toll Party effort.

The Partiers might have a better chance if the Central Texas Regional Mobility Authority completely botches its first toll road projects; they would have a still better chance if they were wrangling sigs for an up-or-down referendum on toll roads (which isn't possible, but we can pretend). But still not a very good chance. And a recall is much stronger stuff, requiring not just vast public anger about something but against someone in particular, which typically requires a broad pattern of incompetence or malfeasance, not just one unpopular vote on one issue. Especially in Austin, which only rarely turfs out even its less popular incumbents.

I'm not privy to polling data here, but my suspicion is that Will Wynn, while not the object of a surfeit of popular respect, is hardly despised; he's simply too mild a public figure to provoke the kind of widespread outrage needed to support a recall effort. And unless an incumbent is truly despised – so much so that they'd be well-advised to resign rather than face recall – the recall won't happen.

But let's say I'm totally wrong, and Austin is seething with the anger that motivates the Toll Party, and they deliver their 42,000-plus sigs to the clerk. What happens then? Is it inevitable that, if a recall election is held, Wynn would lose? Well, no. (McCracken and Thomas, I think, have even less to worry about, and yes, the three would be voted on separately.) And that's in large part because of the electoral mechanics involved.

And Now for Something Completely Different –

Let's pretend that the Toll Party manages to make its numbers by Jan. 1, which I think is being really generous. The city clerk then has 20 days to certify the sigs. The council then waits five days to act, in case Wynn, McCracken, or Thomas decides to resign. (Being mayor hasn't exactly been a fun gig for Wynn, but I doubt he'd resign.) They then must set a recall vote at least 30 but not more than 60 days after the petitions are certified, without waiting for one of Texas' four uniform municipal election dates (in January, May, September, and November, May being the normal Austin date). I think it's a safe bet the recall would be closer to day 60.

But the council must wait for a unified election date to hold a special election to replace whoever gets bounced, if anyone does. The fact that these are separate elections, potentially months apart, already makes it harder for a recall vote to succeed; it's not like California, where by election day the recall had become a more-or-less conventional race between the Gray Ghost and the Governator. Austin would simply become mayor-less.

If we threw out Will Wynn, would Jackie Goodman, as mayor pro tem, assume his job? The city charter is actually unclear on this point – it says the pro-tem shall do the mayor's job in the event of his "absence or disability," but there's no provision allowing the council to appoint her permanently. State law allows such an appointment when a city's charter has no provision for filling vacancies. Austin's does, calling for a special election for any vacancy on the council, but says nothing about filling seats in the interim. For other council seats, this isn't an issue, but someone has to be mayor for the council to actually function.

Unless the Toll Partiers really get their game on here – like, completing a petition drive before the November elections – there's little chance a special could be called for next May, when Goodman is not standing for re-election. So Wynn's heir apparent would more likely be Goodman's successor as mayor pro tem – by tradition, the most senior member of the council, which would be either Raul Alvarez or Thomas (assuming he is not also recalled). Ultimately, any of these three could end up running as the incumbent, for a job that at least two of them have been eyeing already. Not the result, one imagines, the Party has in mind.

So, even if the Toll Partiers clear two very high hurdles – getting their sigs, and then winning the recall – they would then need to clear an even higher third hurdle, fielding a winning candidate who would be friendlier, from their suburban-GOP-leaning perspective, than Will Wynn. The last "conservative" – by Austin standards – to get elected mayor was Lee Cooke, 15 years ago; last year, a couple of conservative candidates got their clock cleaned, as they typically do. If there's a reason to suspect a special post-recall election would be different, I don't know what it would be.

p.s. So far, I know of eight nonincumbents planning to run for City Council in 2005. If you don't think I know you're running for council, e-mail me at mcm@austinchronicle.com.
More Austin At Large columns