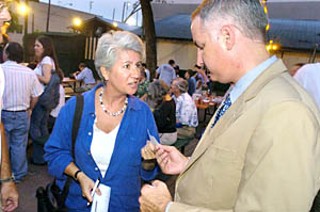 "I was raised in deep East Texas, and one of the things I did a lot was hunt for pineywood rooters. And in case y'all don't know what this is, they're big, black, ugly pigs with long teeth. And if you ever get one mad at ya, he won't leave you alone. So Tom DeLay's got a pineywood rooter right on his –" says Richard Morrison, pointing at his butt, "right now!"

Add another Quixote to the crusade. But unlike the other Democrats indirectly fighting back at Tom DeLay by running in the tailored-for-Republicans districts he designed, congressional candidate Morrison is, in the words of Dem activist and former state Rep. Glen Maxey, "putting a stake through the heart of the beast" – taking on DeLay himself in CD 22.

Morrison was in town to raise funds in the city that was possibly hit the hardest by DeLay's schemes – Lloyd Doggett's old CD 10 was gerrymandered into three far-flung districts, at least two of which will likely go Republican. At a May 4 Scholz Garten meet-up of Democracy for Texas – a spin-off of the Howard Dean campaign – Morrison vowed to boot DeLay out of Congress and bring his CD 22 seat to the Democrats. Morrison says those who said he had no chance against "the most powerful man in Washington" – including, initially, his friend Glen Maxey – are wrong.

If fundraising is any indicator, Morrison shouldn't be brushed off too lightly: "For the people that said we could raise no money and money would be hard to raise, we've already raised more than $300,000, and we've raised more money than all of DeLay's [previous] opponents combined!" he told the cheering crowd. Of course, Morrison only has about half of that still in the bank. DeLay, by contrast, has already spent more than three times what Morrison has raised and still has about $1.3 million in cash on hand.

And the money must be translated into actual votes. Morrison cited a Democratic National Committee poll showing him about 10% behind, although he tried to spin that positively, saying that the 49%-39% numbers were not good for an incumbent. More troubling for Morrison: In the only poll that counts, an election, DeLay received 15,490 in an uncontested Republican primary back in March. On the Democratic side, Morrison and opponent Erik Saenz could only muster up 10,223 votes between the two of them, only 7,303 of which went to Morrison. Clearly, he'll need a staggering level of support from independent voters – hard to come by these days in our politically polarized nation.

Still, don't try to tell that to Morrison or the people signing checks at Scholz. He's still convinced that hard work can take him over the top: "My attitude is, if Glen walked up to me right now and said, 'Morrison, I guarantee you a victory if we could cut off your right arm,' I'd say, 'Glen, go in there and get the machete and bring it out here cut it off.' That's what it's going to take from each one of you, that kind of dedication."

For more information on the Morrison campaign, go to www.richardmorrisonfordistrict22.com.